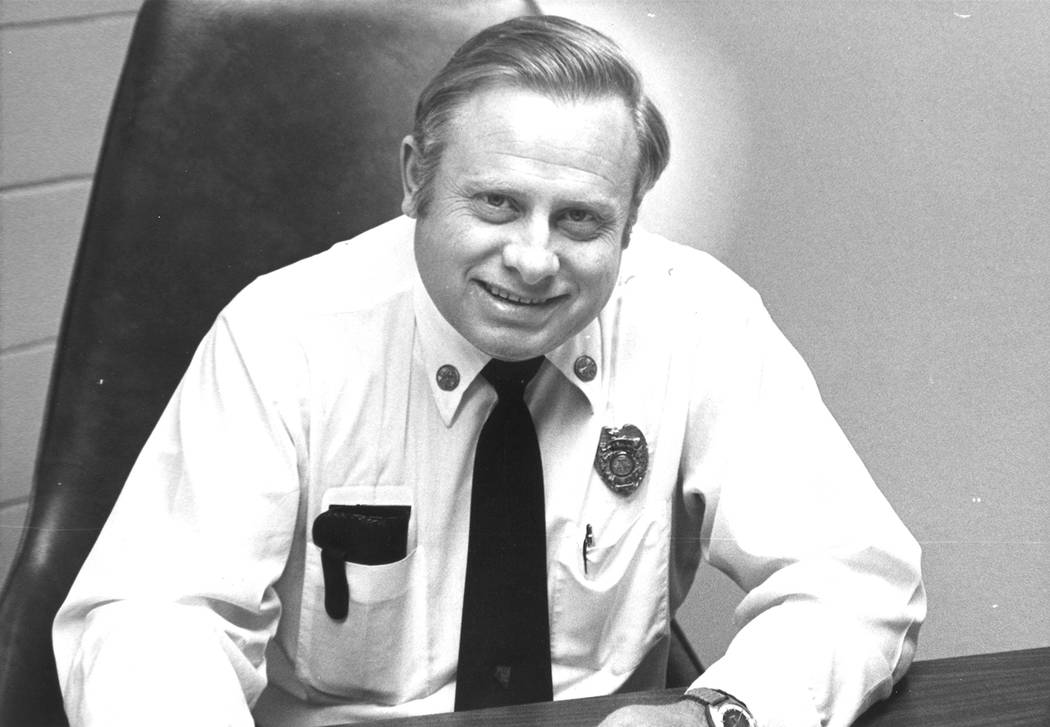 Sears, his wife Elaine and their three daughters, Cynthia, Susan and Janice, moved to Boulder City in 1969 after living in California and Ohio.

“He was a good dad,” said his daughter Janice. “They were very strict with us. I’m kind of glad they did it because I feel we turned out really good.”

She also said that while she was in school in Boulder City, she was his secretary some days and received school credit for her work. Despite her dad being busy with his job, Janice said that he would come see her and her sisters cheerlead whenever he could. He also came home for lunch and dinner. When he wasn’t working, he would spend time working on their yard.

“He did yard work all the time,” she said. “Our yard was so beautiful.”

Sears served as fire chief for 21 years in Boulder City, bringing the department from a volunteer organization to a full-time one.

Boulder City Division Chief Chuck Gebhart started his career as a firefighter at Nellis Air Force Base but shortly after came to Boulder City on a reserve status when Sears talked to his boss Chief Jack McComb and said what he needed to transition it to a full-time one.

“Chief Sears needed experienced guys who could hit the ground running,” Gebhart said. “He talked to Chief McComb at Nellis and that’s I got my foot in the door.”

As a younger firefighter, Gebhart said that working with Sears was a lot like working your dad, and that Sears shared a lot of his wisdom with him. He said he was also a great mentor who liked tradition and had an open-door policy for those working with him.

“He was not afraid to kick your butt, but he did it in a father-son kind of way,” he said.

Most importantly, Gebhart said he is thankful for Sears showing him how to be calm under pressure.

“He was just always a calming guy,” he said. “As young guys, we complained about what didn’t go our way. He was calm and collected in those situations.”

As fire chief, Sears was proactive and helped reduce fire insurance rates and started “Operation Heart Start,” which increased the department’s save-rate of cardiac emergencies to more than the national average.

The Nevada governor’s office declared Saturday, Feb. 9, 1991, as Chief Robert Sears Days for the “many years of outstanding service” he dedicated to the safety of the people of Nevada.

After retiring, Sears continued to served the public, but in a different way through the Boulder City Chamber of Commerce.

Boulder City Chamber of Commerce CEO Jill Rowland-Lagan said that Sears worked with the chamber from the early 1970s until he moved to Buhl in 2012. While with the chamber, he served as president twice, sat on the board four times and was a volunteer.

“At the time of his death, he was the longest-standing member,” she said.

Rowland-Lagan’s first experience with Sears was actually when she was in preschool, and his wife worked at her day care center.

“He brought in this scrapbook on my first day of work … showing everybody this ridiculous little preschool picture,” she said.

The picture was of her and Sears from a field trip to the fire station. They were both in front of the fire truck, and she said that her fire hat was crooked because of her hair being in pigtails.

In working with Sears, Rowland-Lagan said a major thing she learned was how to fix a problem rather than dwelling on it.

“He (Sears) would spend five minutes on the problem and 55 minutes on how to fix it and move on,” she said.

She described him as being a champion for small businesses as well as someone with a home-town mentality who knew everyone by name. In all her time working with him, she said that the biggest thing she learned was integrity.

“He was honorable and wanted to make sure those around him felt the same way,” she said. “He expected a lot from others but it allowed them to rise to a higher level.”

Sears is survived by his three daughters, six grandchildren and seven great-grandchildren. His wife died in 2010.

Funeral services will be held at 2 p.m. Friday, at Farmer Funeral Chapel in Buhl, Idaho. A celebration of life service will be held in Boulder City in January.