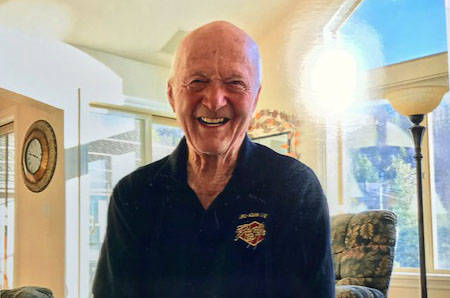 Smith, 95, who moved to Boulder City with his wife in 1990, served on City Council from 1997-2001 and raised thousands of dollars for local nonprofit organizations.

“My parents were from Pennsylvania,” said Marilyn Kraft, Smith’s oldest daughter. “In 1962, we moved to California. It was getting way too busy there. … In 1990, they were looking at different places. They went to Boulder City and fell in love with it.”

Kraft said they originally planned to split their time between California and Boulder City, but they ended up staying full time in town.

“Both my mom and dad loved Boulder City and loved being involved with the community there. … They left a huge footprint in Boulder City history,” she said.

Kraft said through the foundation her dad used his expertise in travel and worked with Rotary and other local nonprofits to organize trips and to raise money for them. She said he helped raise between $500,000 and $750,000.

He also helped the city in a way still being felt today by providing it with the Elaine K. Smith Building.

“They bought that building and leased it to the college for $1 a year. …After Mom died in 2011, Dad worked with the city to donate that building to it,” said Kraft.

Acting City Clerk Tami McKay said the building was named to honor Smith’s wife after she died, and it was formally accepted March 13, 2012, at a City Council meeting.

“I was saddened to hear of the passing of longtime resident and former City Council member William (Bill) Smith,” said Mayor Kiernan McManus. “I came to know him several years ago when I contacted him to discuss his perspective on possible uses for the Elaine K. Smith Building. Bill and his wife had deeded the building to the city many years ago for the sum of $1. During the past four years I have been on council, we had occasional conversations about issues current at the time. His love and concern for Boulder City was always evident. He described Boulder City as a jewel and he worked to see that it shined brightly. Our city has benefited greatly from the efforts of Bill and Elaine Smith. His presence will be missed.”

Kraft said her dad died July 17 from complications after a heart attack.

“It’s a huge, huge loss for our family. … He was very positive,” she said. “I’ll miss his enthusiasm, his joy of doing something different. I’ll just miss my dad.”

Smith is survived by his three daughters, seven grandchildren and four great-grandchildren.

Kraft said even though some of the grandchildren and great-grandchildren lived far away, they all had a chance to know their Grandpa Bill.

“The whole family is going to miss him,” she said.

Kraft said a service for her dad will not be held. Rather, they are going to mix their parents’ ashes and share them with family members.

“Because Mom and Dad loved to travel everywhere, we want their final resting place to be everywhere,” she said.

In lieu of flowers, donations can be made to the Juvenile Diabetes Research Foundation in honor of William M. Smith. The address is: Northern California Chapter JDRF, 1215 4th Ave., No. 1100, Seattle, WA 98161.

Kraft said donations can also be made to the Boulder City Library because he “loved that library.”