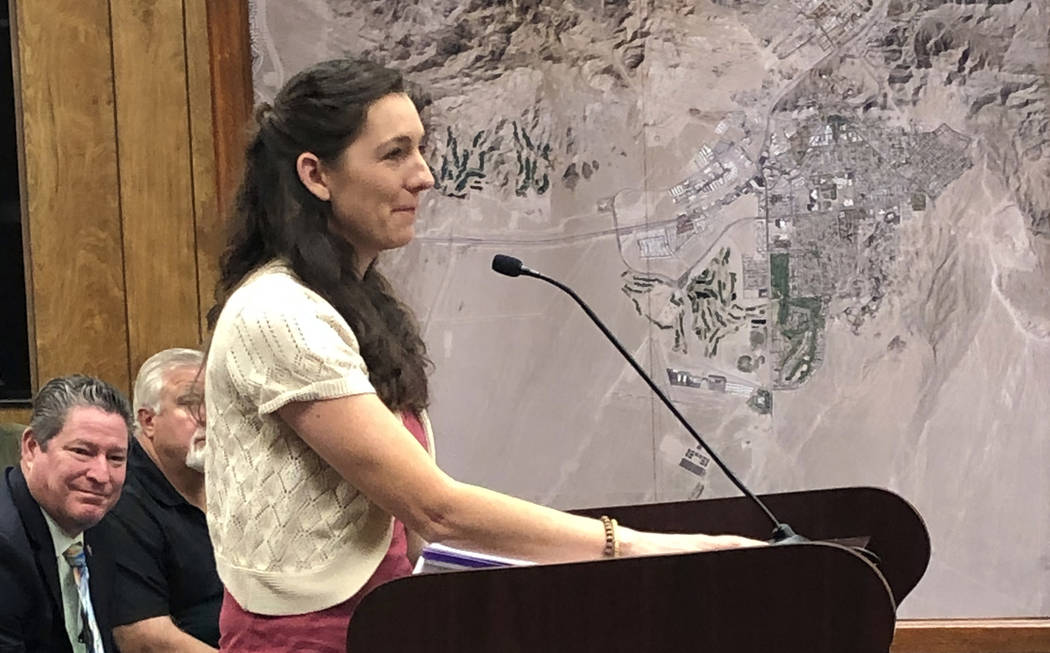 (Boulder City) Councilwoman Tracy Folda addresses City Council on Tuesday, July 9, after being appointed to complete the term of Kiernan McManus, who was elected mayor in June.

Resident Tracy Folda was appointed to complete the City Council term vacated by Kiernan McManus when he was elected mayor in June.

At its meeting Tuesday, July 9, McManus and Councilwoman Claudia Bridges nominated Folda for the open seat. Councilmen Warren Harhay and James Howard Adams nominated Judith Dechaine. Both women received two votes, none of the council members wanted to reconsider their votes and Folda was chosen when her name was drawn by lot.

“I’m very honored to serve Boulder City and it’s something I do not take lightly,” Folda said. “I will be doing my homework for every item that comes before me … . I look forward to the time to spend finishing up Kiernan McManus’ term.”

Bridges said the decision on who to nominate was “extremely difficult.”

“I, too, would nominate Tracy Folda, and I don’t want to go into all the reasons, but it was a very well thought out decision that I had to make … . This was not an easy decision especially making it in isolation,” she said at the meeting.

McManus did not say why he nominated Folda.

Harhay said he nominated Dechaine because she had “skin in the game,” as she had run a campaign during the primary election.

Adams said he met with the people who had reached out to him as well as others in the community to find out their ideas of what was best for the community.

“It was incredibly difficult,” he said. “I didn’t discuss this with any other council member … . There were a lot of things to weigh … . but that’s the weight of responsibility for City Council.”

Before nominating Dechaine, Adams disclosed that her husband, Glenn Feyen, had donated to his campaign but the gift had been giving with no strings attached and was not a quid pro quo.

Folda is one of the co-founders of the Boulder City Community Alliance. She is a stay-at-home mother to five.

Folda will be sworn in at the Aug. 13 council meeting as there is only one meeting in July. Her term on the council will end in June 2021.