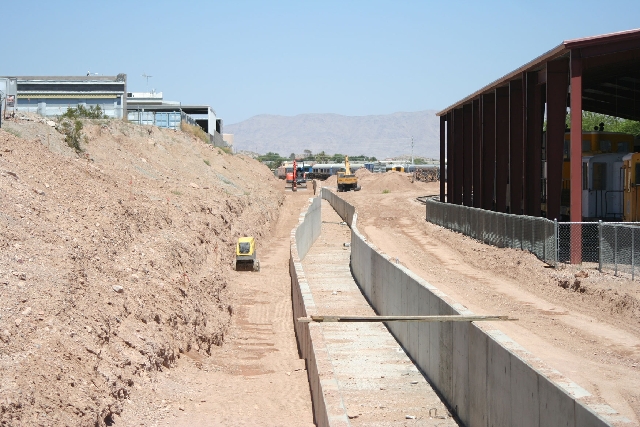 The latest flood control project on the north side of U.S. Highway 93 by the railroad tracks is moving on schedule and under budget.

Nearly $4.3 million was set aside for the North Railroad Conveyance Project by the Clark County Regional Flood Control District. The city is projecting to spend just over $3 million.

“If we don’t use all the funds given to us, the remainder goes back to the flood control district,” said Scott Hansen, Boulder City’s Public Works director.

In February 2012, the City Council approved the project, which was initially scheduled to complete work this month. However, the date was pushed to the end of July because of additional work approved by the City Council.

Phase one of the project was to stretch from Canyon Road west between the railroad track and the commercial properties off Foothill Drive, to the North Railroad Detention Basin.

The project includes the installation of storm drain pipe, a concrete channel and a box culvert, a drain built under the street, at Yucca Street near the Nevada Southern Railway Museum.

The new 4-foot-by-3-foot culvert required Southwest Gas to lower existing gas lines prior to its installation in November. The city’s sewer line also needed to be lowered.

To mitigate flooding, the flood control district funds every project 100 percent by collecting a .25 percent sales tax, implemented in 1986.

The district was established in 1985 by the Nevada Legislature and adopted by Boulder City in 1986.

The master plan is updated every five years, with its most recent update occurring in 2008.

The district also creates a 10-year spending plan, which is updated during every fiscal year. In fiscal year 2013, Boulder City was allocated nearly $5 million. Boulder City’s total funding for flood control projects has been over $24 million since the beginning of the district.

According to the flood district’s 2008 master plan, several projects still needed to be completed in Boulder City. But Keane pointed out that most of those projects were proposed for land that was not developed yet.

“Most of that is west of the airport and up towards the 95,” Keane said.

Current projects include the North Railroad Conveyance project and work on the Veterans Memorial Detention Basin.

“Projects out near Bootleg Canyon and along Buchanan Drive will be the next,” Hansen said.

Since 1990, Boulder City has prepared and adopted Flood Control Master Plan Updates submitted to the flood control district to use as a planning tool to alleviate flooding in Clark County.

There has been progress on Boulder City flood control plans since 2003, according to the latest plan, “with the construction of approximately 1.5 miles of flood control facilities.”

Repair work also was needed on the nearby Veterans Memorial Detention Basin. City officials believed they could save money by asking the construction company already working on the adjacent Railroad Conveyance project to do the work.