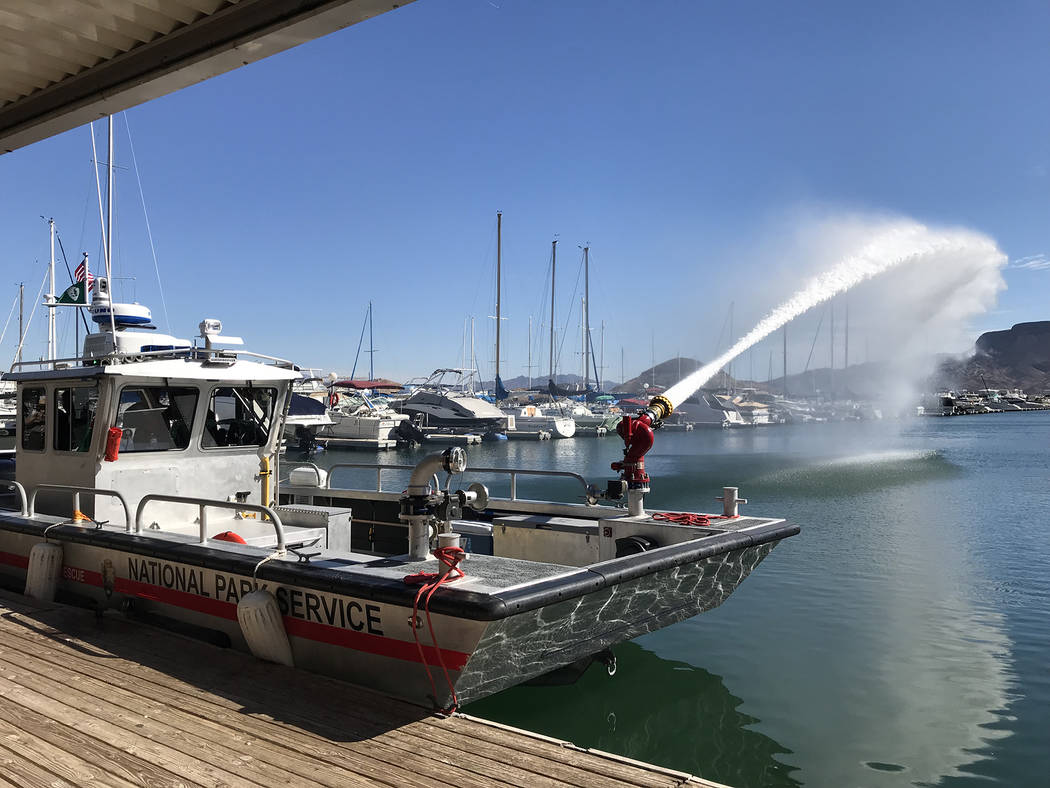 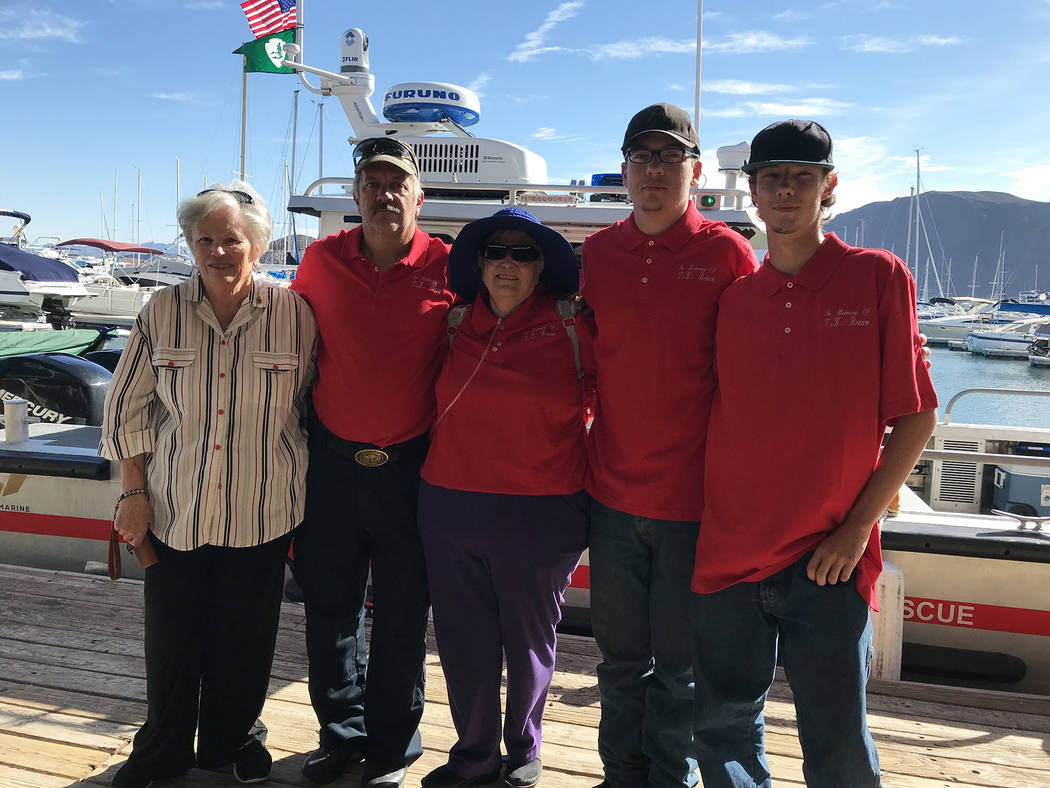 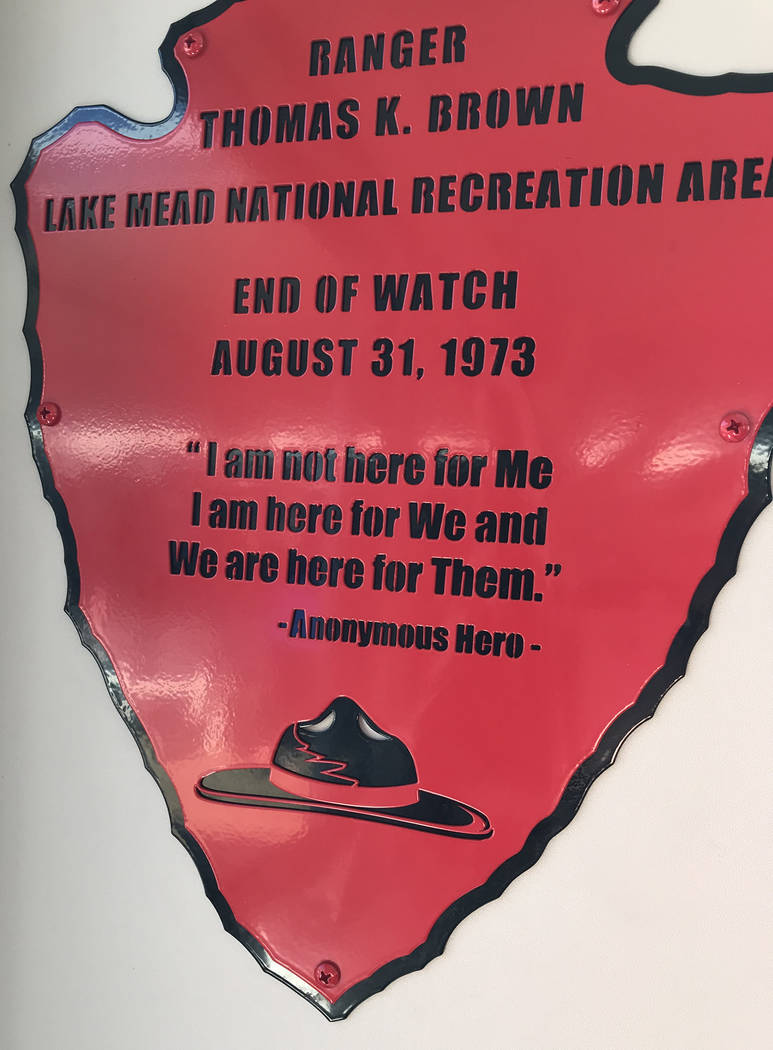 Hali Bernstein Saylor/Boulder City Review A plaque inside the newly named T.K. Brown fireboat at Lake Mead National Recreation Area pays tribute to the ranger who died Aug. 31, 1973, during a training exercise. A new fireboat was named the T.K. Brown during a dedication ceremony on the 45th anniversary of his death.

Lake Mead ranger Thomas Kenneth “T.K.” Brown was honored in the most appropriate way Friday as a fireboat was named in his memory.

On the 45th anniversary of his death, Brown’s dedication to helping others and service at the park was recognized as Lake Mead National Recreation Area dubbed its first official fireboat the Ranger T.K. Brown.

“It’s quite a blessing to see them honor dad,” said his daughter Barbara Nash.

She said he dedicated his life to helping others and had a profound love of the water and Lake Mead.

“There is not a person he wouldn’t help. They broke the mold when they made my dad,” his daughter Bonnie Allison said.

Nash said her father was one of the first Los Angeles County firemen on a boat in Marina Del Rey. After retiring as a captain, he brought his 30 years of experience with water safety and firefighting to Lake Mead in 1969, becoming one of the first law enforcement officers at the park.

“The Lake Mead Visitor and Resource Protection Division is one of the most diverse and complicated programs in the National Park Service,” he said. “We’re also one of the most highly respected at all-hazard operations, providing law enforcement, search and rescue, firefighting and emergency medical on land and water.

“We’re successful because of the people who choose to work here that choose to dedicate themselves, much like T.K. did … ,” Hnat added.

Adam Kelsey, chief ranger at the park, said it’s important to never forget those who dedicate their lives, often at great personal risk and sacrifice, to protect the park and its visitors. He said Brown is one of two officers killed in the line of duty at Lake Mead.

He died in a training accident at Ringbolt Rapids on Lake Mohave.

“Today, we honor his memory and devotion to public service by dedicating our fireboat in his name,” said Lake Mead Superintendent Lizette Richardson.

Also on hand were members of the U.S. Coast Guard Auxiliary, with which Brown served as a national officer.

Following the dedication, Lake Mead rangers invited the family aboard for a ride along to the Boulder Islands. As the fire pump was deployed in the middle of the lake, two rainbows appeared. Allison said the rainbows were for him, recalling that it was about the same time that day she got the call about her father.