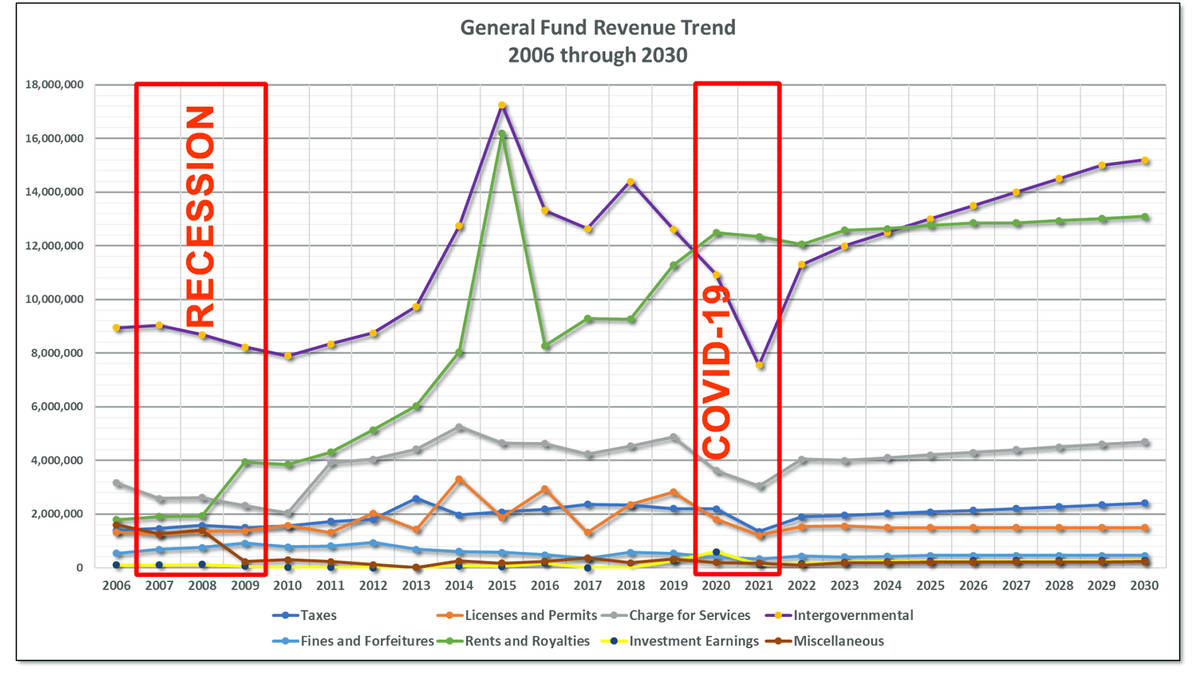 Boulder City The city’s tax revenues are expected to be better than staff originally thought they would be when the COVID-19 pandemic began.

Boulder City’s financial outlook for the next five years has improved, but the long-term effects of the COVID-19 pandemic are still unknown, according to city leadership.

Finance Director Diane Pelletier presented the city’s five-year financial plan to City Council on Jan. 26. According to it, revenues will be better than what they expected at the start of the pandemic.

“We budgeted 40 percent less revenues due to COVID; in reality, revenues are only 9 percent less. … Overall we are in much better shape than what we thought we might be in,” said Pelletier.

According to the financial plan, general fund revenues for fiscal year 2022 are expected to be about $11 million, which is almost $3 million more than the previous year.

The More Cops and crime prevention funds will be 12 percent lower rather than the expected 40 percent, property tax revenue is expected to be 7 percent higher than what the city received in 2020 and all operating and emergency reserves are fully funded. Both the consolidated tax and infrastructure tax are expected to be much less in previous years.

The city’s energy lease portfolio also is not expected to take a financial hit.

According to a staff report, each leaseholder has been contacted and verified they will continue to meet lease payments.

“Because of that single factor, while our belts need to be tightened, the economic outlook for FY22 is not as dire as it could have been,” Pelletier wrote in the report.

“We continue to be cautiously optimistic,” she added. “We expect 2022 to align more with pre-COVID revenues.”

Because the revenues are looking better, Pelletier said staff will continue to fill open positions that are fully funded. She also said they are still avoiding discretionary expenses, including travel and training and no layoffs are expected.

Additionally, she told council she is expecting to unfreeze 10 unfilled staff positions in the next fiscal year.

“It’s actually pretty conservative, but I think it’s steps,” she said. “It’s baby steps, and I still think we have to be extremely cautious. I think there’s still a lot of unknowns. … Based on that, I don’t feel comfortable opening any more up at this time.”

“I think that it shows that we’ve been able to hopefully avoid most of the … harshest impacts that our neighboring communities have had to experience,” he said. “I think we’re very fortunate.”

“At this point, things are certainly much improved over the initial estimates … . We’re not out of the woods yet,” said Mayor Kiernan McManus.

Pelletier said the budget process for the 2022 fiscal year budget will begin in February.