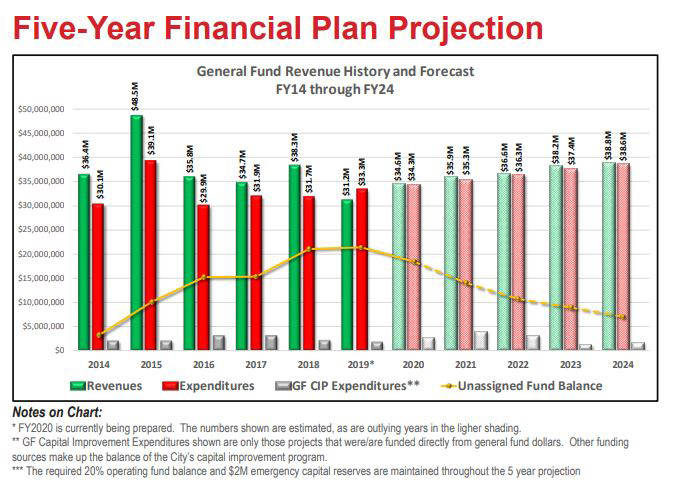 (Boulder City) The city's finances look to be in good shape as its revenues and expenses are performing as expected. City Finance Director Diane Pelletier recently made the annoucement when she presented the five-year financial plan to City Council at its meeting on Feb. 12.

Boulder City’s finances are looking to be in good shape as money is coming in and going out as expected.

“All funds are performing as expected at this point the year,” said Finance Director Diane Pelletier as she shared the financial plan for the next five years at the Feb. 12 City Council meeting.

According to the city code, the city must adopt a five-year plan annually to ensure it can accomplish the financial commitments and goals set in its strategic plan.

With half of the city’s fiscal year completed, Pelletier said revenues are coming in as expected as well as the projected expenses. She said all funds are at or below 52 percent of the budgeted amount, which is where they should be at this point in the fiscal year.

“Boulder City’s financial position has improved since the recession,” said City Manager Al Noyola. “This five-year plan provides a roadmap to continue along this sound financial pathway. Our Finance Director Diane Pelletier and her incredible staff are making sure we plot our course accordingly.”

In the plan, all the estimates were done conservatively, according to Pelletier.

Consolidated tax collections were forecast at 4 percent rather than the actual five-year trend of 5.25 percent.

The rent projections were just from leased or optioned properties and did not include land that could be utilized in the future. Revenue from building permits does not include potential fee collections from future solar development or tract home developments.

Pelletier said it was due to the record-setting summer and fall temperatures.

“The utility fund revenues … are above the 50 percent trend line at this point, but … the hot weather months are behind us and we expect some of that to trend back down over the next few months,” she said.

The airport revenues were slightly below the 50 percent mark.

“We’re watching everything closely and nothing here alarms us at this point,” she said.

Staff is working on the budget for the 2019-2020 fiscal year. A City Council budget workshop is scheduled for March 13. Pelletier said she plans to submit it to the state May 16, earlier than last year.

Financial Plan by on Scribd