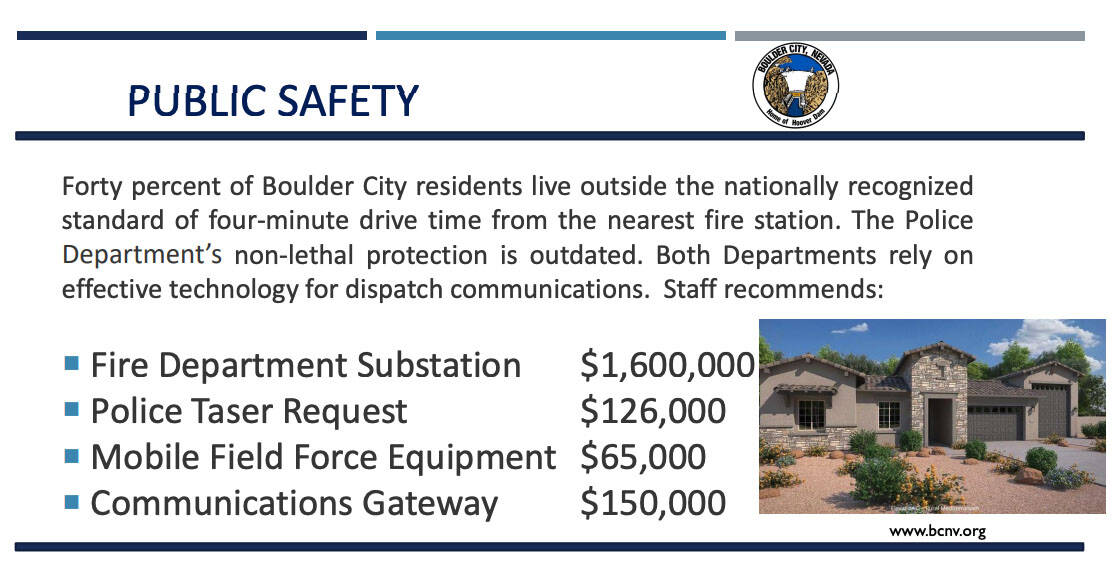 (Image courtesy Boulder City) Included in the presentation for how to allocate American Rescue Plan Act funds were suggestions for public safety improvements. City Council unanimously approved them during its meeting Tuesday, July 12, 2022.

City Manager Taylour Tedder presented a plan for how to allocate $7.9 million that included updates to city infrastructure, upgrades for public safety facilities and improvements to local parks at Tuesday’s, July 12, City Council meeting, which was unanimously approved.

“Overall, I certainly think this is a good use of this money,” said Mayor Kiernan McManus.

Facility and security upgrades for city infrastructure, which total $3.6 million, will be made to add additional Americans with Disabilities Act compliance and electric vehicle accessibility.

Other public safety measures will cost around $1.9 million and include a fire department substation, tasers for the Boulder City Police Department and other communication equipment upgrades.

Councilwoman Claudia M. Bridges was firmly in favor of the upgrades to security, reminding the audience that she is from Highland Park, Illinois, where a tragic shooting recently happened.

“I would just like to see whatever it takes to make sure we have extra security at our public events and that there are people around that are protecting us. That situation (Highland Park) leaves me with a lot of insecurity. I have thought about all of our wonderful outdoor events, and I would hate to see Boulder City in that same situation,” she said.

City parks and public works will also receive a piece of the ARPA pie as alley maintenance, updated park seating and signage, building maintenance, and pickleball courts will be added.

“Pickleball is a growing sport in the nation, and it was definitely a top priority to have courts from all of the public feedback we received. So we did get a cost estimate and put it in here,” said Tedder.

The municipal court will receive more than $690,000 to improve its lobby to accommodate social distancing better and its security cameras and X-ray scanners.

The city also will allocate funds for items such as upgrades to the senior center and its pantry, support for Boulder City schools, a home repair support program, and a community health worker program at the hospital.

The city’s survey about how the additional money should be used received 128 online responses, 65 paper submissions and 20 email responses.