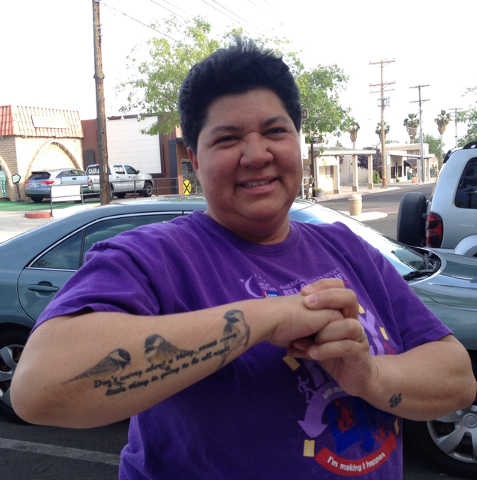 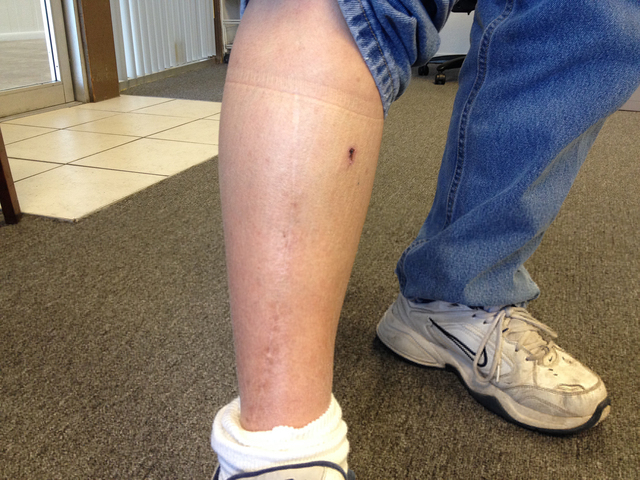 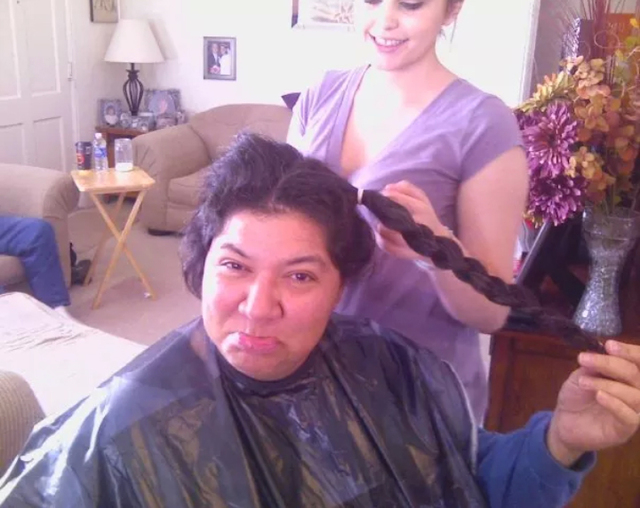 Lisa Medeiros has been driving a truck since she was 21. For the past 24 years, she’s relied on her legs to pay the bills.

“It just kept getting bigger, fast,” she said. “It was pushing on nerves and tendons and I was starting to have pain at night. There were signs that something wasn’t right.”

It took Medeiros a few months before she went to the doctor in March 2009, and when he broke the news that her lump was cancerous, she went numb.

“It was like the Charlie Brown teacher talking when I found out,” she said. “There was just buzzing in my head. I only remember bits and pieces of what he was saying because the conversation was just so overwhelming.”

Paula Parker, Medeiros’ partner, was there when Medeiros found out she had cancer. She remembered the blank stare that came over Medeiros’ face.

“She just sat there with her mouth open and just kind of nodded,” Parker said. “Once he said ‘You have cancer’ she just checked out.”

Cancer runs in Medeiros’ family. Her father had bladder cancer, one aunt has Hodgkin’s lymphoma, and her mother, grandmother and aunt were all diagnosed with breast cancer. Her mother and grandmother survived the experience, but her aunt died of breast cancer after a prolonged struggle that included a double mastectomy.

Medeiros, 45, was diagnosed with myxoid liposarcoma, a rare cancer of connective tissues that resembles fatty tissue under a microscope. According to the website sarcomahelp.org, more than half of liposarcoma cases involve the thigh, and as many as a third involve the abdominal cavity.

The lump in Medeiros’ leg was approximately 15 inches long, so long that doctors forced her to undergo chemotherapy and radiation to shrink the tumor before her surgery.

“If not, there wouldn’t have been enough muscle left in my leg,” Medeiros said, restraining herself from crying as she has many times before.

She was warned of the possibility that she could lose her leg. As a lifelong truck driver who relied on her legs to pay the bills, Medeiros told her doctor that wasn’t an option.

Medeiros teared up when describing her chemotherapy. She let out a powerful groan. She said she can never forget the experience.

“It was probably the worst thing you’d ever want to put in your body,” she said. “The doctor went really extreme with my treatment because the tumor grew so fast.”

Medeiros went through chemo for four days a week every three weeks. She began losing her hair, and doctors gave her steroids to keep her appetite functional. By the third week of treatment, the nausea consumed her. She began to feel angry about her situation. The chemotherapy was starting to take its toll.

“There was just this rage,” she said with a soft, but harsh inflection. “But you can’t feel right because it’s poison. They’re literally poisoning you to save you.”

Doctors then gave Medeiros Neupogen shots, a clear drug that stimulates white cell production in chemo patients. She recalled the shots as an “excruciating pain,” where every bone in her body hurt.

Her voice cracked when describing the experience. Tears again began to fill her eyes. Between the unbearable treatment and the constant thoughts of losing her leg, she struggled to stay strong.

“I was concerned about not being able to work,” she said. “But I accepted what was gonna happen. You have to prepare yourself for anything. What are you gonna do? You wake up and you just have to deal with it.”

After years of chemotherapy, radiation and constant trips to her oncologist, Medeiros was told in September that there was no longer any traces of cancer in her leg. She was speechless.

“I kinda didn’t believe him,” she laughed.

Medeiros said her right foot still gets numb at times and her ankle remains tender to the touch. Knowing she can still drive a truck brings her comfort, and she said her leg gets stronger every day.

“I have a leg and it works,” Medeiros said as she gazed down at the long, vertical scar that runs from the top of her foot to the bottom of her knee.

It’s a constant reminder of the life-altering scare she endured for more than four years. But she’s gaining better movement of her foot, and being able to drive a truck again brings her solace.

Medeiros found out about Relay for Life, a fundraising event for the American Cancer Society, in 2009 when she was going through her chemotherapy. The following year, she participated for the first time. She said she enjoys sharing and hearing the stories from other cancer survivors who have gone through the same experiences she has. She’s also sympathetic toward those who have had cancer in more serious places.

“My heart just goes out to them,” Medeiros said. “I can’t even imagine having radiation in a tender area like your face. My heart breaks because I know how tough it is.”

Medeiros is humble. After hearing the stories from other survivors, as well as those who are still undergoing the excruciating treatment, she said she’s thankful the cancer was only in her leg.

“I don’t think anybody really says they feel fortunate with the type of cancer they had, but I really was,” she said. “It could’ve been worse.”

At Relay for Life, Medeiros enjoys the interaction with those who have shared her triumph, as well as her pain. She said it’s a sacred bond that goes far beyond candidly writing a check for cancer research.

“It’s great to be able to relate to other people and help them with what they’re going through,” she said. “Just knowing that you’re not alone, and that somebody else understands and has walked in your shoes.”

One of Medeiros’ favorite parts of Relay for Life is the survivor lap, a lap where cancer survivors run the opening lap of the relay together to emphasize the camaraderie they’ve gained through their personal struggles with cancer.

“But it’s not just the survivors that are here. It’s also the remembrance of those who were lost, and it’s reaching out to those who are going through it,” she said.

This year, Medeiros is serving as chairwoman for the survivors’ tribute aspect of the event.

Medeiros credited Bob Marley for helping her through her experience. She listened to him every day while in the hospital to help her cope with her treatment.

When she found out she had beaten cancer, she got a tattoo on her right forearm of three black and gold chickadees with a song lyric that from Marley’s famous song “Three Little Birds.”

“Don’t worry about a thing, cause every little thing is gonna be all right,” Medeiros said. “This is my mantra for life. I took those words to heart. As long as you’re alive, you can make it all right.”

Parker said even after her hard-fought battle with cancer, Medeiros was the same person.

“I know a lot of people say they have a renewed life after, but it didn’t really change her because she’s always cherished life,” Parker said. “It didn’t need to change her.”