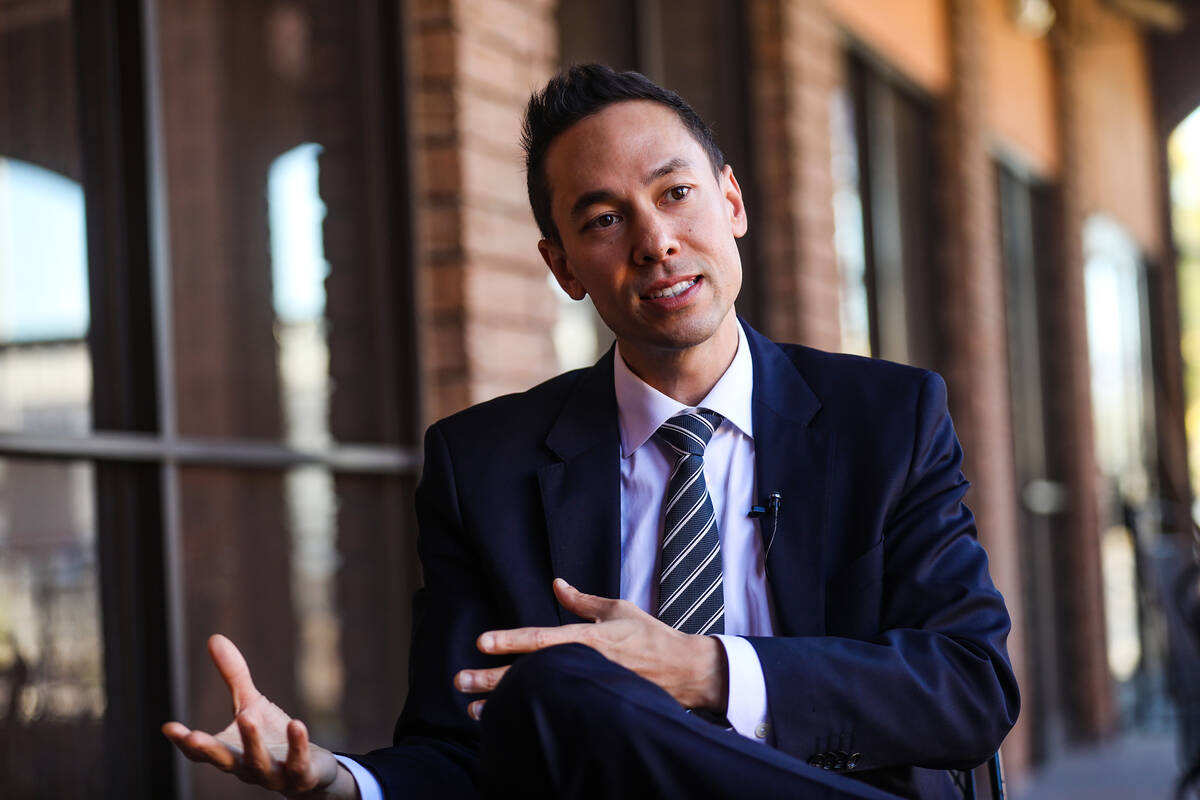 (Rachel Aston/Special to the Boulder City Review) Thomas Moskal, a former Clark County prosecutor, speaks about the Nevada Highway Patrol's handling of the investigation into the case of Jordan Barson at the Las Vegas Review-Journal building, Tuesday, Nov. 16, 2021. 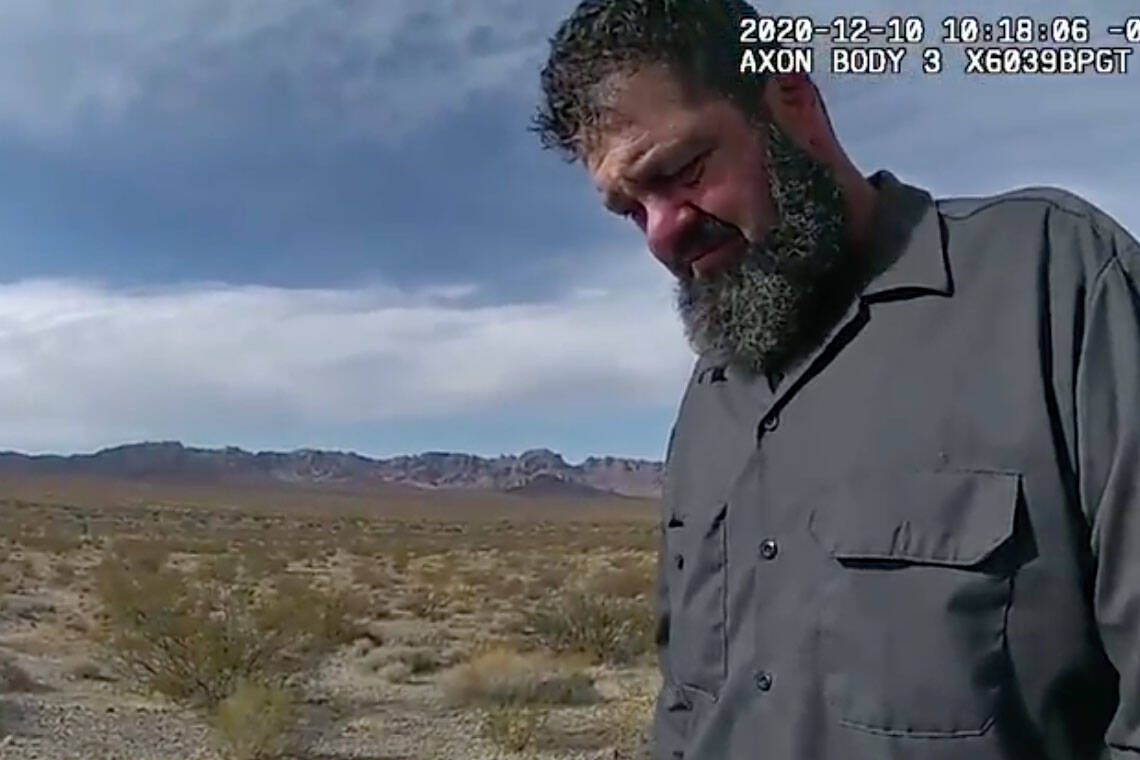 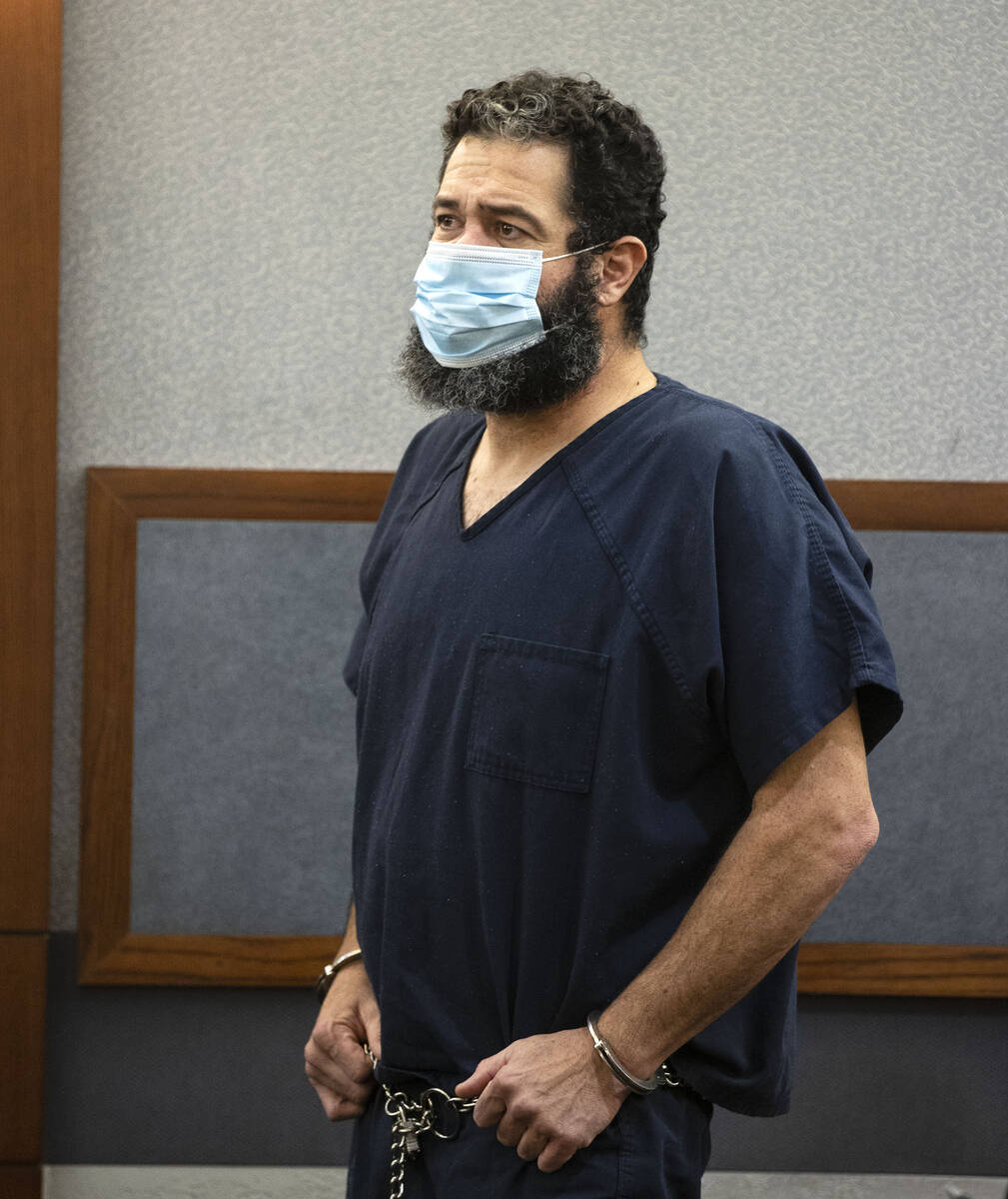 (Bizuayehu Tesfaye/Special to the Boulder City Review) Jordan Barson, the box truck driver who plowed into a group of bicyclists, killing five, appears in court at the Regional Justice Center on Feb. 4, 2021, in Las Vegas. 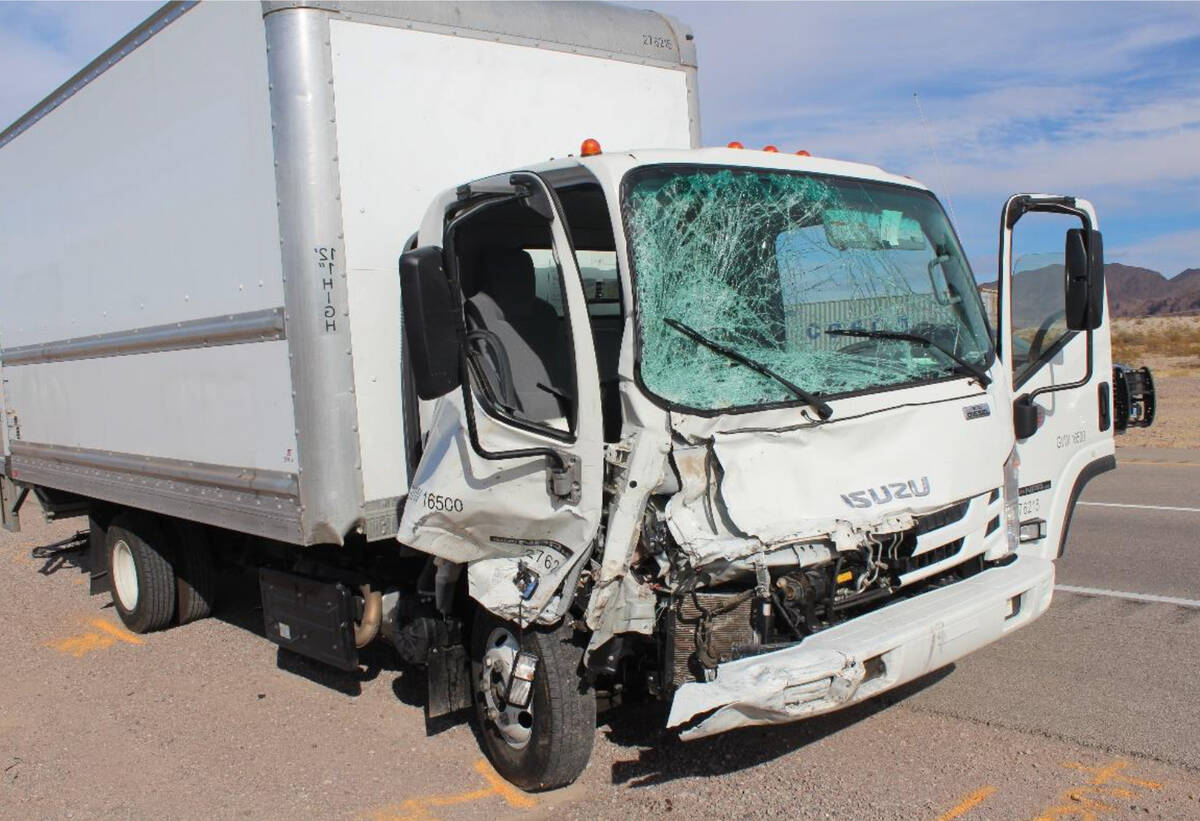 (Nevada Highway Patrol) The cab of a box truck was severly damaged after crashing into several bicyclists and another vehicle Dec. 10, 2020, on U.S. Highway 95. Five bicyclists were killed and several others injured in the crash.

Former Chief Deputy District Attorney Thomas Moskal, who prosecuted Jordan Barson, 46, said body camera video from the Dec. 10 crash scene shows troopers missing signs that Barson was under the influence of methamphetamine after the box truck he was driving struck the bicyclists. Barson, Moskal said, was deemed by troopers to have “unsatisfactory results” on field sobriety tests, yet troopers repeatedly said on camera that they didn’t think Barson was impaired.

“Anybody watching that video, you don’t have to be a trained drug recognition expert to tell that this guy is impaired,” Moskal said, adding, “to not even think that is an option I would say is unbelievable.”

Moskal now works as a defense attorney in the Las Vegas Valley. He said troopers failed to pursue a warrant for a blood draw for Barson, opting instead to convince Barson to submit to a voluntary blood draw. This later presented the prospect that a defense attorney could claim the blood draw was coerced by authorities.

Ultimately, Moskal said the errors caused Clark County prosecutors to tender a plea deal that greatly reduced the amount of prison time Barson received. He was sentenced in June to 16 to 40 years in prison.

“It is more than fair to say they screwed it up,” Moskal said of the Highway Patrol investigation.

The Nevada Department of Public Safety, which oversees the Highway Patrol, issued a statement in response to this story:

“The safety of the public and the life of each person is a priority for the Department and for every trooper who has taken an oath to keep our roadways and our communities safe. The decision to drive impaired is one of the top causes of traffic fatalities, and our heartfelt condolences are with the families affected by these incredibly tragic events. These crashes can be avoided if drivers make smart decisions.

“The Department has reviewed this investigation thoroughly and continues to be committed to improving investigative techniques, providing necessary resources and ongoing training for troopers.”

“I don’t smell any alcohol on him”

The bicyclists were part of a group of 20 that left Henderson that morning to complete the roughly 130-mile Nipton Loop. All of the bicyclists who were killed or injured were seeking cover from the wind and riding behind the group’s safety escort vehicle when Barson’s box truck plowed into them, according to a Highway Patrol report. The speed limit in the area where the crash occurred is 75 mph.

Body camera video from the scene shows troopers saying time and again, before and after field sobriety tests, that impairment is not suspected.

“I don’t smell any alcohol on him,” one trooper is heard saying. “I don’t have reason to believe he’s under the influence. He’s obviously distraught.”

The field sobriety tests are also depicted on the video. Barson is heard saying he feels “shaky” and a trooper is heard saying afterward to another trooper that parts of Barson’s test results “were a disaster.”

Yet, when a trooper later describes to a supervisor the results of the tests, he offers up reasons why Barson performed poorly, noting a helicopter was flying nearby and that the ground on which the tests were administered was uneven.

“They were driving in the No. 2 travel lane, the bikes, OK?” one trooper is heard saying to another.

“That changes things,” a trooper is heard saying.

“A little bit,” the trooper responds.

On the video, troopers say they don’t have probable cause to pursue a warrant to draw Barson’s blood. They instead decide they need to convince Barson to submit to a voluntary draw. They repeatedly tell Barson he’s going to lose his license unless he submits to the draw.

“Well you lose your license for a year,” a trooper is heard saying.

“I don’t want that to happen to you,” a trooper is heard saying.

Moskal said the plea deal resulted from the errors made at the scene and the failure of troopers to adopt an “investigative mindset.”

“The problem was he (the first trooper on scene) was really checking for alcohol, and he didn’t smell alcohol,” Moskal said. “Ends up this guy had enough methamphetamine in his system to make somebody overdose.”

“Even if the guy consents, apply for a warrant because we just don’t want to have that challenged in court,” he said.

Donna Trauger lost her husband, Tom, in the crash. She described the loss of the avid cyclist, triathlete and family man as a never-ending nightmare in which justice wasn’t served.

“You can imagine it, but you don’t actually know until you’ve lived through something like this,” she said.

Trauger said it’s clear to her the investigation at the scene was botched.

“Ask for a warrant,” she said. “Follow proper protocols. It should have been part of just basic training. All of those things got missed.”

Trauger has watched most of the video from the crash scene and said she “feels like the troopers are victim blaming.”

“They were more concerned about why the cyclists were out there, why they were traveling in lane two … they empathized with the driver,” she said. “They seemed overly concerned and emotional about how he was feeling and how he was doing and less concerned about the people lying in the road dead.”

Trauger said she has been in regular touch with leaders at the Highway Patrol, demanding they increase training and provide more resources for troopers to become drug detection experts.

The Las Vegas Review-Journal reported in September about chronic turnover and understaffing at the Highway Patrol because of underfunding by the state.