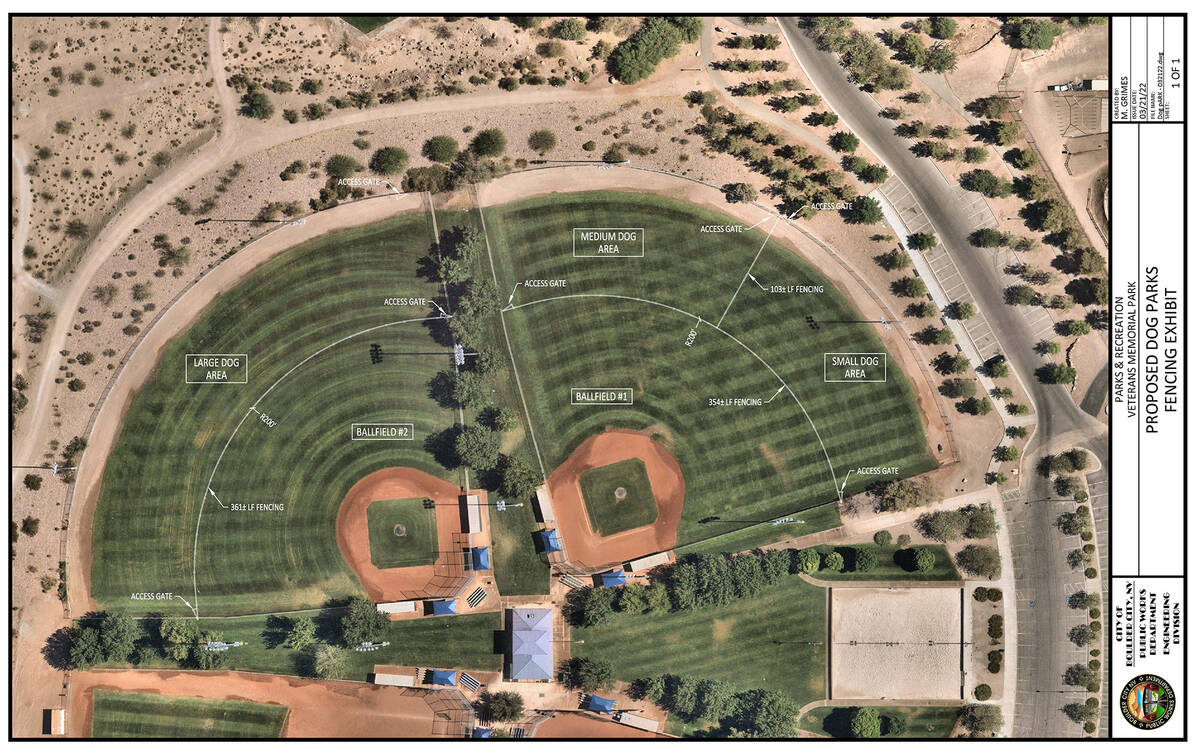 Boulder City City Council approved moving forward with creating an area for dogs at Veterans' Memorial Park and allocated $72,000 in American Rescue Plan Act funds to pay for it.

The city is moving forward with creating an area for dogs at Veterans’ Memorial Park and is planning to use American Rescue Plan Act funds to pay for it.

At its April 7 special meeting, City Council unanimously approved allocating $72,000 in ARPA funds to pay for fencing off a portion at the back of the Little League fields at the park as well as installing benches, trash cans and waste bag dispensers.

“I think it’s a really good start as we try to encourage people to get their dogs out of the (city) parks, off leash and into an enclosed area that has turf (grass),” said Councilwoman Claudia Bridges. “I think See Spot Run is a wonderful dog park, but the only area to run your dog has hot gravel in the middle of the summer and it is not a place that you want your dogs running up and down.”

“I can see using the ball fields,” added Mayor Kiernan McManus. “From the numbers … quoted that was the least expensive alternative and probably the easiest to make happen.”

To create a completely new one-acre dog park, Public Works Director Keegan Littrell said it would cost $95,000. Grass would also have to be installed, which the council members had said they wanted to avoid.

Council also unanimously approved adding the project to the city’s capital improvement plan, and Littrell said it could be completed this fiscal year.

Additionally at the special meeting, City Council approved allocating $500,000 in ARPA funds to the city clerk’s office as well as $300,000 to the municipal court for the unfunded state mandates and $80,000 for improving the permit process for public works, community development and the fire department.

All those items are included in the proposed budget for the 2023 fiscal year.

McManus suggested the resolution and said its purpose was to provide more ways for the youth in the community to be outside with other people.

“In talking with school principals, they have seen … (that) the children have been impacted in significant ways,” he said. “One of the comments that had been made by a principal was that the children have simply not had an opportunity to get out and do physical activities like they normally would. They’ve also simply not been around each other.”

The finance department suggested making this fee waiver part of each fiscal year through Dec. 31, 2024, rather than approving the entire time period at once.

Councilwomen Claudia Bridges and Sherri Jorgensen agreed with breaking it out on a yearly basis.

“What I was thinking is we do not know the unintended cost from this that would happen for the parks and rec(reation) department as a whole, and we’d be able to evaluate it,” said Jorgensen.

Councilman James Howard Adams said he didn’t think that was necessary because waiving the fees will benefit the community and help families.

Council approved waiving the fees in a 4-1 vote with Jorgensen voting against it.

Originally, McManus asked youth swimming lessons fees be waived, too. During the meeting, however, he said he removed them because including them in the resolution could affect existing grant programs.

Other programs the city plans to use ARPA funds for include $50,000 for a community CPR program and automated external defibrillator training and $10.3 million for various water and wastewater projects.