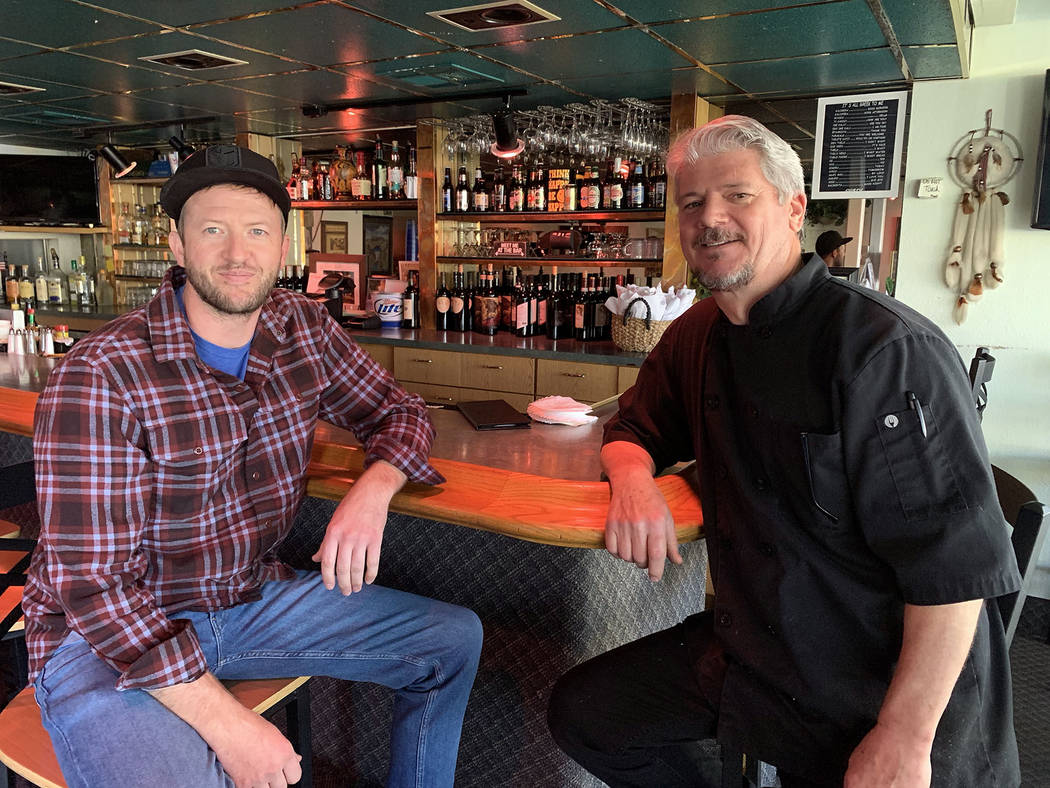 Longtime locals favorite restaurant Evan’s Old Town Grille has been sold and will be remodeled and reopened under a new name and management in the spring.

Evan Lathouris said he and his wife, Vicki, were ready to retire and sold their business to local entrepreneurs Bret Runion and Grant Turner, who plan to remodel the eatery and lease it to a high-end restaurateur.

“It’s time to hang it up and move to something different,” Lathouris said, noting he opened the restaurant Jan. 1, 1997, after working 20 years at his uncle’s establishment. “We are all healthy. It’s just time to retire, travel and do things as a family.”

His last day operating the restaurant will be Feb. 29. Lathouris said he wanted to make sure he was available to cater Boulder Dam Credit Union’s Feb. 19 annual meeting, a longstanding tradition for his family.

Though he admits that operating the restaurant was stressful and a lot of work, Lathouris said it was a dream come true for him and his family.

“I am very thankful to my family for their support and work with me all these years and to my employees who allowed me to live my dream and my customers who come back … all this time,” he said.

Lathouris said the original plan was for his children to take over the restaurant when he was ready to retire. “But they had their own callings.” His son, Kostan, is an attorney, and his daughter, Marisa, is an ultrasound/sonogram technician.

Lathouris said three factors influenced his decision to sell to Runion and Turner. He wanted Evan’s to go to someone who had restaurant knowledge, would give current employees the opportunity to continue to work at the establishment and would provide a nice restaurant for the community.

He said he has known both men for many years and knew they would “definitely qualify for that.”

Runion’s real estate business, Desert Sun Realty, is across the street from Evan’s on Arizona Street, as is Turner’s The Dillinger Food and Drinkery. Turner said he also plays in a regular poker game with Lathouris and their families are longtime friends.

“Being in the food and beverage business, I have such respect for anyone who has been in it this long. Evan did it the right way. It shows in the quality (of his dishes) and the loyalty of his customers,” Turner said.

Runion said they will take over the restaurant March 1, the day after the Lathourises retire, and they anticipate it being “ready to rock” by April 1.

The two said they want the closure to be minimal so that current staff, who provide the level of service they want to offer, can be rehired and trained by the new tenant.

“That level of service is hard to replicate,” Turner said.

At this point, the new restaurant operator has not been selected, according to Turner, adding that a decision is imminent.

He said it was too much for him to operate along with his other establishments.

“I would have to give more time than I have to offer,” he said.

Runion agreed, saying he wasn’t looking to operate a restaurant. Instead they wanted to “make it a great place for the perfect operator to be highly successful,” he said.

Turner and Runion said they also wanted to make sure the restaurant gets the attention it deserves.

They have already ordered materials for the renovation, which will have rich textures, reclaimed wood, oak and brass, elements that lend themselves to fine dining, Turner said.

Runion said he always had a vision for the property to improve its “cosmetics.”

The two men have applied to the city’s redevelopment agency for funds to help with the renovations. It will be considered by City Council members at their Feb. 11 meeting.

This is their first joint business venture.

Runion said that the purchase and transformation of the restaurant is a family affair, just as the Lathourises operated it. He is assisted in his remodeling projects by his wife, Priscilla, while Turner is aided by his father, Larry Turner. All have extensive experience renovating residential and commercial properties.

“Priscilla and I are so dedicated to the town. All we do is predicated in the well-being of the community,” Bret Runion said.

“Grant is on the same page as we are.”

For the time being, Lathouris said he and Vicki plan to remain in the community. He said they may find somewhere with “four seasons and cooler summers” during their travels.