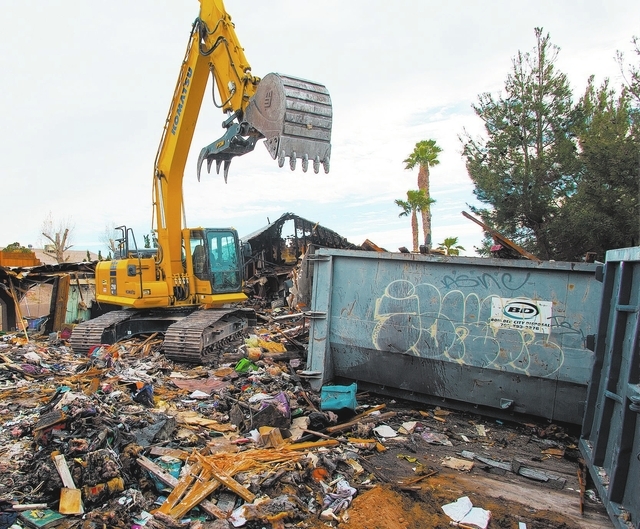 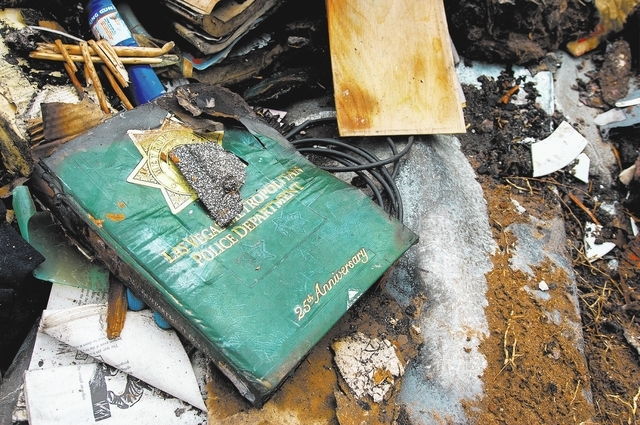 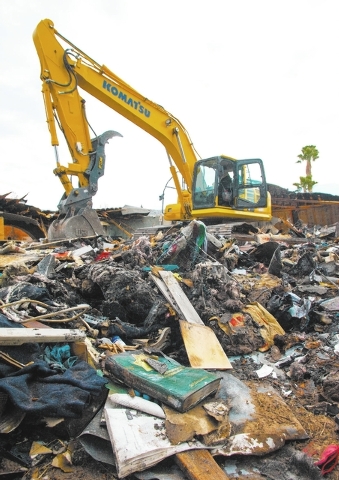 The 1313 Esther Drive residence where off-duty Las Vegas Police Lt. Hans Walters shot and killed his wife and 5-year-old son before setting the house on fire and turning the gun on himself last year has been demolished.

The demolition of the four-bedroom, single-family house began Jan. 23. The job was completed by Monday. The house had been sitting vacant with a charred, collapsing roof since the Jan. 21, 2013, tragedy.

Next-door neighbor Sally Gray said she was “excited” to see an excavator parked on the property when she arrived home from work Jan. 22.

For the first few months after the incident, the house had a “nasty, burnt smell” and it would shed debris onto her property, she said.

“Every time the wind would blow I’d end up with burnt debris on my driveway,” she said.

But even after the smell went away, she said it had been difficult living next to the house, which still had personal items visible in the front entryway and backyard, she said.

“It’s just hard to live here and look at this every day,” Gray said. “When you see it, you’re reminded of what took place here.”

Despite complaints to the city from neighbors and nearby property owners, the house could not be demolished by the city because its ownership has been disputed by family members in probate court, said Brok Armantrout, the city’s community development director.

“We didn’t have the legal right to demo the house,” Armantrout said, because the city is required to notify the owner of record prior to demolition.

However, the city began discussing the possibility of declaring the house a public nuisance and demolishing it, and the issue was scheduled to be discussed at a February City Council meeting, Armantrout said.

But in December the city was contacted by a demolition contractor, hired by a court-appointed administrator for the Walters’ estate, Armantrout said.

The city issued a permit to the company, Top Notch Services, Jan. 21, coincidentally the one-year anniversary of the murder-suicide.

A representative for the company declined to comment about the job.

Walters shot and killed his wife, Kathryn Michelle Walters, and son, Maximilian Walters, the morning of Jan. 21, 2013. After calling 911, he set the house on fire and took his own life with a gunshot to the head.

The initial news left neighbors and acquaintances of the Walters family, a seemingly nonviolent family, stunned. The story also made national headlines.

Hans Walters’ motive was revealed in a 911 call, where he said he killed his wife “because she’s in such chronic pain from her neck and back, and on more medicine that she’s not going to survive.”

The investigation, which was led by Henderson Police Department, painted Kathryn Walters as a woman in increasing pain from a back injury probably suffered because of her passion for running. It also revealed that Hans Walters was under increasing financial and emotional stress. The case was closed in May.

The Boulder City Review received numerous comments in support of the demolition, after it initially posted the news online Jan. 22.

“Glad this is finally being taken care of. Having lived on that street … it was horrible to drive by every day,” Aimee Miralli wrote.