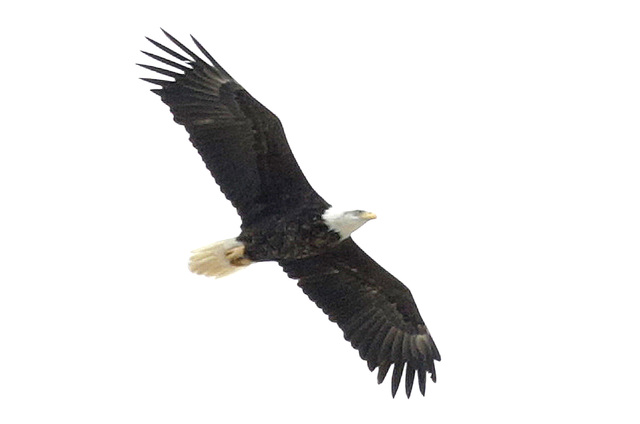 Bizuayehu Tesfaye/Las Vegas Review-Journal @bizutesfaye An adult bald eagle flies overhead at Lake Mead on Jan. 12. A group of biologists and volunteers fanned out across Lake Mead and Lake Mohave for the annual eagle survey. 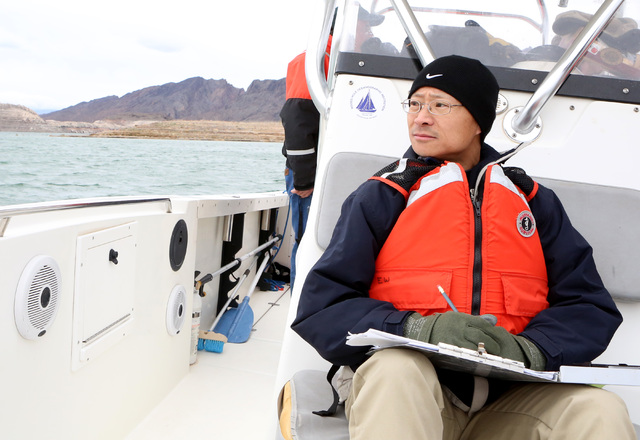 Bizuayehu Tesfaye/Las Vegas Review-Journal @bizutesfaye Sam Luke, a volunteer recorder, scans the skies over Lake Mead in search of eagles on Jan. 12. A group of biologists and volunteers participated in the annual eagle survey.

On a cold and windy Jan. 12 morning, seven boats set out to different parts of lakes Mead and Mohave. The people on each boat were there for one reason: to survey the bald eagle population.

Ross Haley, a wildlife biologist for the National Park Service, has been counting the eagle population for 20 years at an area of Lake Mead called the Overton Arm.

“I have been doing this for a long time, and the Overton Arm usually has the highest eagle population on the lake,” Haley said.

The survey is part of a national effort by the National Park Service and wildlife preservation groups to keep tabs on the bald eagle population, which was an endangered species until 2007.

Haley said the increase in the number of bald eagles since they were taken off the endangered list is nothing short of a victory.

This year, the eagle population at the lake was lower than last year’s count, with 76 eagles spotted, 51 of them labeled as juvenile and 25 as adults.

In 2016, the survey tallied 113 bald eagles. Before the final numbers were gathered, Haley said that a lower count would not worry him.

“A low count wouldn’t concern me because the survey is a national effort,” he said. “Lake Mead is such a small part of the count that low numbers here would not mean that the numbers are low everywhere.”

The bald eagles migrate to Lake Mead to escape the colder winter months of the Pacific Northwest.

The surveying process is simple, with people on each boat recording every sighting of an eagle or another bird of prey such as a falcon or hawk.

Sam Luke, the volunteer recorder on Haley’s ship and a first-timer to the eagle survey, said he joined the effort as a way to get out on the water and help the park’s conservation work.

“Being a part of the survey seemed like a really interesting experience, so I am happy to be out here,” Luke said. “It is nice to do our part making sure the bald eagle population is still safe.”

Haley acknowledged that this method of counting eagles is not mistake-free.

“Obviously counting them by hand could cause some mistakes,” he said. “We could miss some or recount some, but like I said before, this is a national effort and I have faith in those numbers.”

While the bald eagle is no longer an endangered bird, Haley said people should still protect the species because, not too long ago, the pesticide DDT was killing the population. DDT is now banned in the United States.

“It is still vulnerable to pesticides and that sort of thing,” Haley said. “The bald eagle is a harbinger of our environmental health.”

Haley extrapolated that a healthy eagle population can mean cleaner water and air.

During their annual count at Lake Mead and Lake Mohave, volunteers spotted: