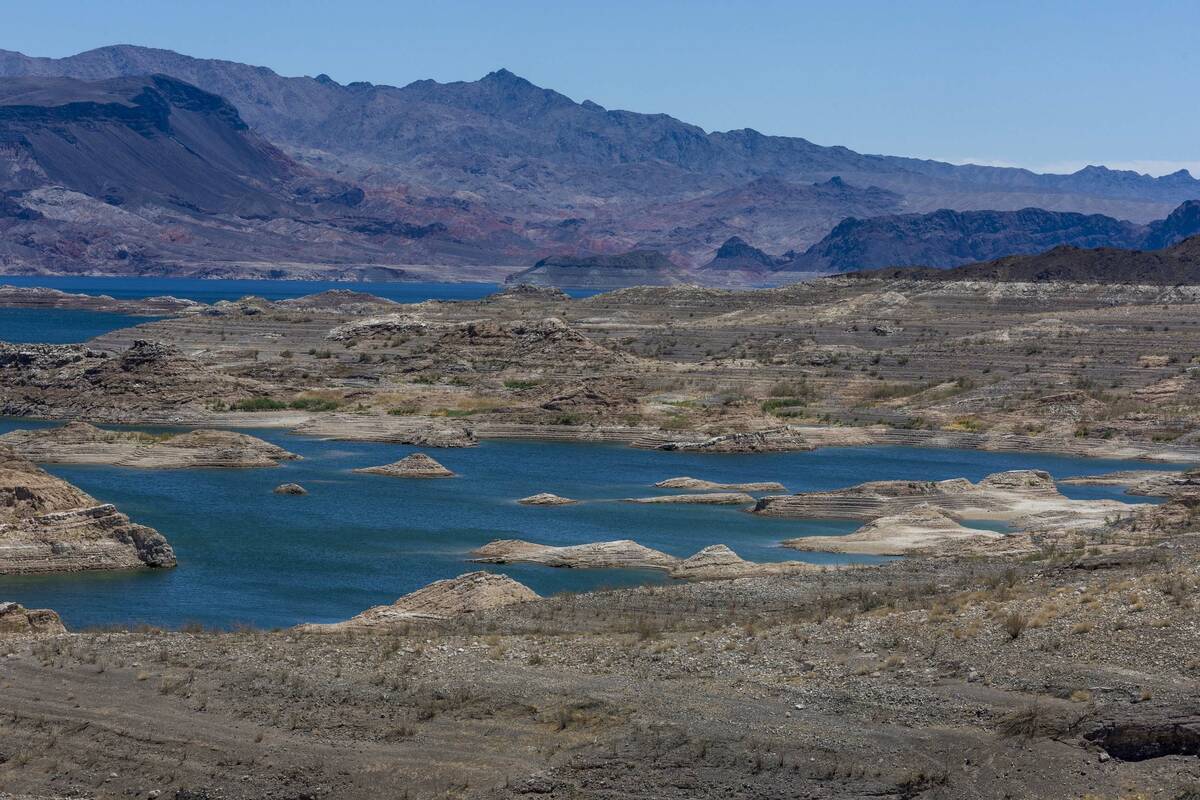 (L.E. Baskow/Las Vegas Review-Journal) Water continues to recede along the shoreline of Lake Mead as seen from the Sunset View Scenic Overlook at the Lake Mead National Recreation Area on May 11.

The shortage declaration made by the U.S. Bureau of Reclamation Tuesday, Aug. 16, — which was expected given Lake Mead’s continued decline and was laid out under previous agreements — means that Nevada, Arizona and Mexico will see additional cuts to their Colorado River allocations in 2023.

But the cuts pale in comparison to the drastic reductions of 2 million to 4 million acre-feet of water use that federal officials had told the seven Colorado River basin states to come up with ahead of Tuesday’s announcement, a deadline that came and went without any agreements after negotiations broke down late last week.

“The system is approaching a tipping point, and without action we cannot protect the system and the millions of Americans who rely on this critical resource,” Bureau of Reclamation Commissioner Camille Touton said during a news conference Tuesday.

A two-decades-long drought and continued overuse have plunged Lake Mead and Lake Powell to historic lows and both now sit at just over one-quarter of their capacities.

The federal government declared its first ever water shortage for Lake Mead last year, which curtailed Nevada’s annual allocation of water from the river by 21,000 acre-feet, or nearly 7 billion gallons. Nevada is normally entitled to 300,000 acre-feet of water per year, the lowest allotment of the seven Colorado River basin states. Southern Nevada gets about 90 percent of its water from Lake Mead.

Under the new Tier 2a shortage, Nevada’s allocation for 2023 will be reduced by another 4,000 acre-feet. The total reductions for next year represent roughly 8 percent of Nevada’s annual water apportionment from the river.

Arizona will see reductions of 592,000 acre-feet, or 21 percent of its annual allocation. Mexico’s allocation will be reduced by 104,000 acre-feet. California will face no cuts under the shortage.

Those additional cuts do not come close to the 2 million to 4 million acre-feet in reductions that Touton told the states in June are needed to stabilize water levels at Lake Mead and Lake Powell and protect critical hydropower and water delivery infrastructure at Glen Canyon and Hoover dams. Touton gave the states two months to submit those proposals, and promised that the federal government would act unilaterally if the states did not act.

With no deal in place by Tuesday, Touton and other Reclamation officials said they are developing measures to implement the reductions if need be while stressing that they believe there is still time for the states to come up with the cuts voluntarily.

“We started the process in which we will develop the tools to take the action when we see it necessary for the system,” Touton said. “We’re continuing to work with the basin states because we believe that the solution here is one of partnership.”

John Entsminger, general manager of the Southern Nevada Water Authority, told the Review-Journal on Tuesday that he was hoping to hear more specifics about what the federal government is prepared to do if the states can’t come to an agreement on committing to cuts voluntarily.

But the federal officials did not provide specifics despite repeated questions from reporters about what those actions would look like or when they would be prepared to implement them in lieu of a deal between the states.

“I did not get that today in the announcement, nor did I get it from the five or six questions they got from the press conference. They danced around it the whole time,” said Entsminger, who sent a scathing letter to the Interior Department on Monday, Aug. 15, lambasting the lack of progress in negotiations between the states.

“I don’t think it’s helpful,” Entsminger added about the lack of clarity from federal officials. “I think we really need more specificity as to the nature of a unilateral federal action in order to motivate the states.”

Arizona Department of Water Resources Director Tom Buschatzke and Central Arizona Project General Manager Ted Cooke said in a written statement that Arizona and Nevada had put forward a proposal that called for reductions of 2 million acre-feet in the lower basin and Mexico. Cooke and Buschatzke said that proposal was rejected.

Entsminger said Nevada had agreed to support the proposal after it was raised by Arizona, but he added that it “was rejected literally within 5 minutes.”

“It was on and off the table so quickly that it didn’t occur to me as something I would have considered credible,” Entsminger said.

In a written statement following the shortage declaration Tuesday, Entsminger said that Nevada finds itself in a “relatively enviable position.”

The authority said that it will be able to absorb the cuts because of the conservation measures that Southern Nevada has put in place over the past two decades that have helped it reduce consumptive water use by 26 percent since 2000.

While the shortage will reduce Southern Nevada’s water allocation to 275,000 acre-feet next year, the region consumed just 242,000 acre-feet last year and is on track to use even less this year, according to the authority.

As negotiations continue over how to further reduce use on the Colorado in the face of the 23-year megadrought, Western water observers are fixing their eyes firmly on the upper basin states of Wyoming, Colorado, New Mexico and Utah.

Those states have been resistant to committing to cuts to meet the call from federal officials and have argued that the cuts should fall on the shoulders of the lower basin — Nevada, Arizona and California — and Mexico because those regions use more water.

But water managers in the lower basin and water conservation advocates say that to protect the entire system, every state is going to have to share the load.

“Certain Upper Basin interests are holding the Bureau of Reclamation hostage at this point,” Kyle Roerink, executive director of the Great Basin Water Network, said in a written statement. “They have called the Bureau’s bluff time and again. Nothing has changed with today’s news — except for the fact that the Colorado River system keeps crashing.”