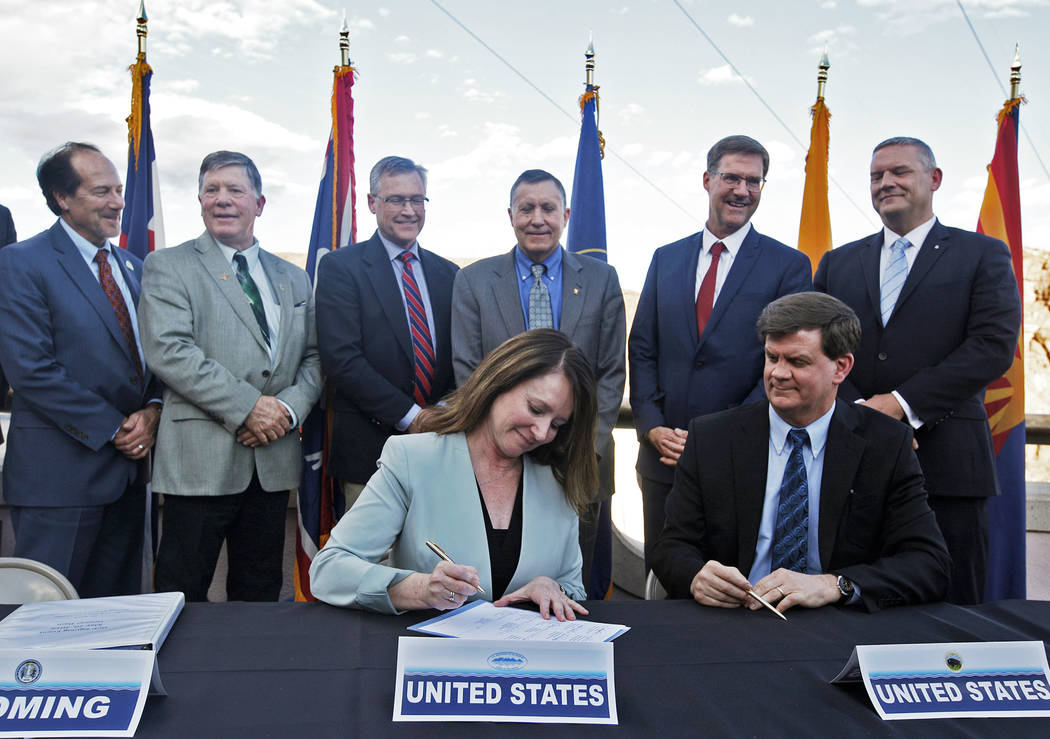 (Rachel Aston/Las Vegas Review-Journal) Commissioner of the U.S. Bureau of Reclamation Brenda Burman signs the interstate drought contingency plan next to Assistant Secretary for Water and Science for the Department of the Interior Tim Petty at the Hoover Dam in Boulder City on Monday, May 20. Looking on are, from left, New Mexico State Engineer John D'Antonio, Wyoming Commissioner of the Upper Colorado River Commission Pat Tyrrell, Director of Utah Division of Water Resources Eric Millis, Director for the Arizona Department of Water Resources Tom Buschatzke, Chairman of the Colorado River Board of California Peter Nelson, and General Manager of the Southern Nevada Water Authority John Entsminger. 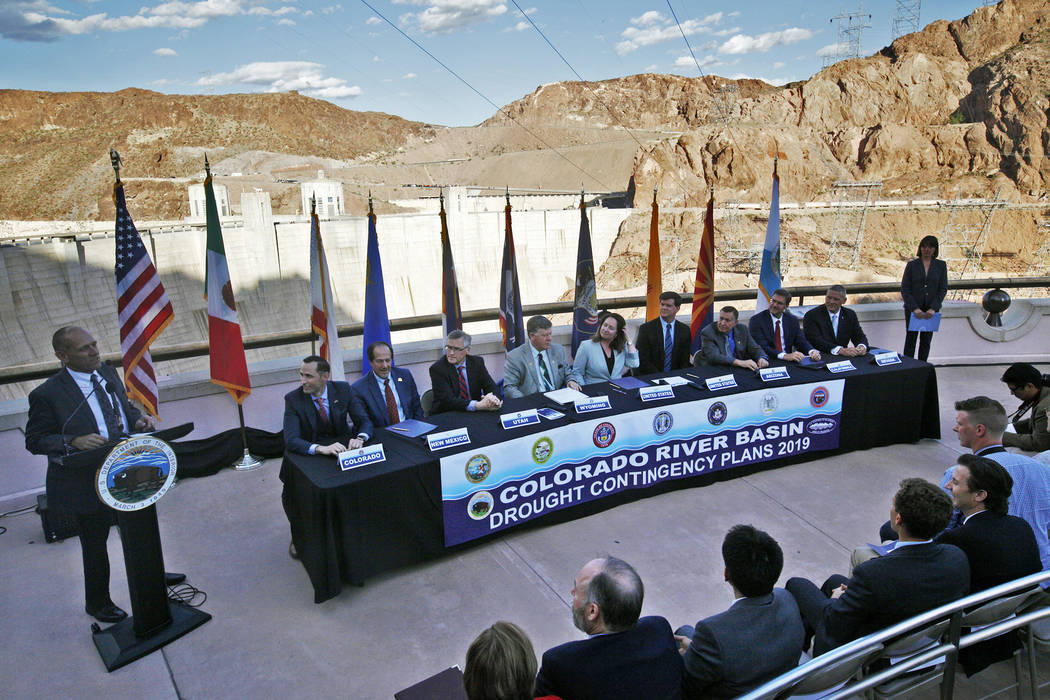 Top water officials from across the Southwest gathered at the Hoover Dam on Monday to celebrate the completion of emergency drought plans for the Colorado River.

From an observation deck overlooking the dam, federal regulators and representatives of the seven states that share the river signed the last of the legal documents needed to enact the drought contingency plans.

“The Colorado is the single most important water resource in the southwestern United States and northwestern Mexico,” Bureau of Reclamation Commissioner Brenda Burman said. “These (plans) reduce the risks that face everyone who relies on the Colorado River.”

The signing ceremony took place within sight of one of the drought’s most startling monuments: the bleached-white bathtub ring on the cliffs around Lake Mead marking a 130-foot drop in the water level since 2000.

The completion of the drought plans also activates a series of voluntary reductions by Mexico, which agreed to leave more of its river water in Lake Mead several years ago pending the deal among the seven states.

Mexico’s first contribution to Lake Mead of 41,000 acre-feet could come next year.

California would join in the voluntary cuts only if the lake’s water level drops 42 feet from where it is now.

Negotiations on the hard-fought deal took years, 2,152 days to be exact from the first meeting to the last, according to Terry Fulp, lower Colorado regional director for the bureau.

In the end, it was signed without the river’s largest water user.

California’s Imperial Irrigation District, which draws more from the Colorado than any other entity, refused to sign the pact because it doesn’t address the growing environmental threat posed by the shrinking Salton Sea.

Jeffrey Kightlinger, general manager of the Metropolitan Water District of Southern California, said his agency is still in talks with Imperial over a compromise he hopes will lead to the irrigation district joining the multistate river deal.

“But we are in litigation as well,” Kightlinger said.

Entsminger said that “it’s always better if everyone is involved,” but Imperial’s decision not to participate won’t affect the larger deal. California has committed to leaving the same amount of water in Lake Mead regardless, he said.

“I think the most important takeaway for Nevada residents is that seven states and two countries are working cooperatively to ensure the reliability of the Colorado River,” Entsminger said from the Hoover Dam observation deck. “There really is no more important natural resource to Nevada than this river.”