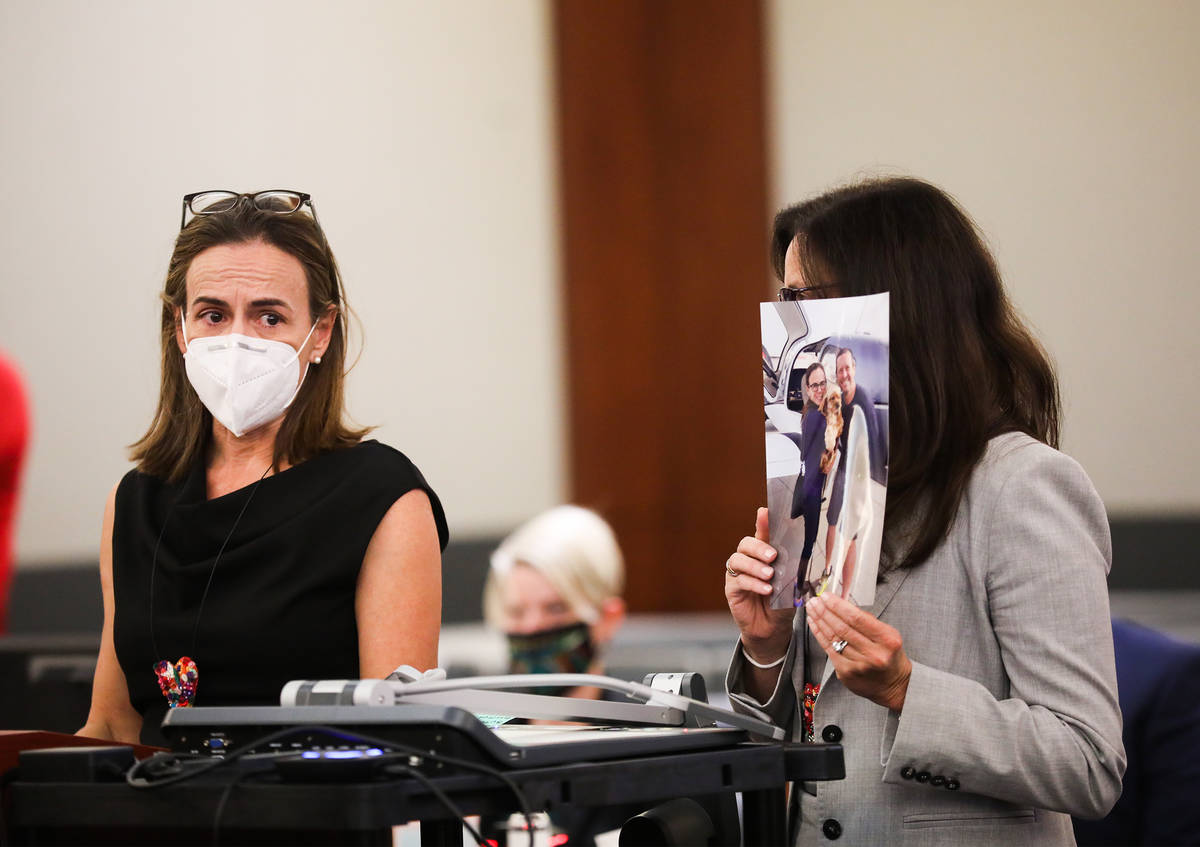 (Rachel Aston/Las Vegas Review-Journal) Donna Trauger, wife of victim Tom Trauger, one of five people who were killed by Jordan Barson when he crashed into a group of bicyclists in December, reads her victim impact statement Tuesday, June 8, to the court during the first day of a two-day sentencing hearing for Barson at the Regional Justice Center in Las Vegas. He pleaded guilty in April to two counts of DUI resulting in death and faces up to 40 years behind bars. 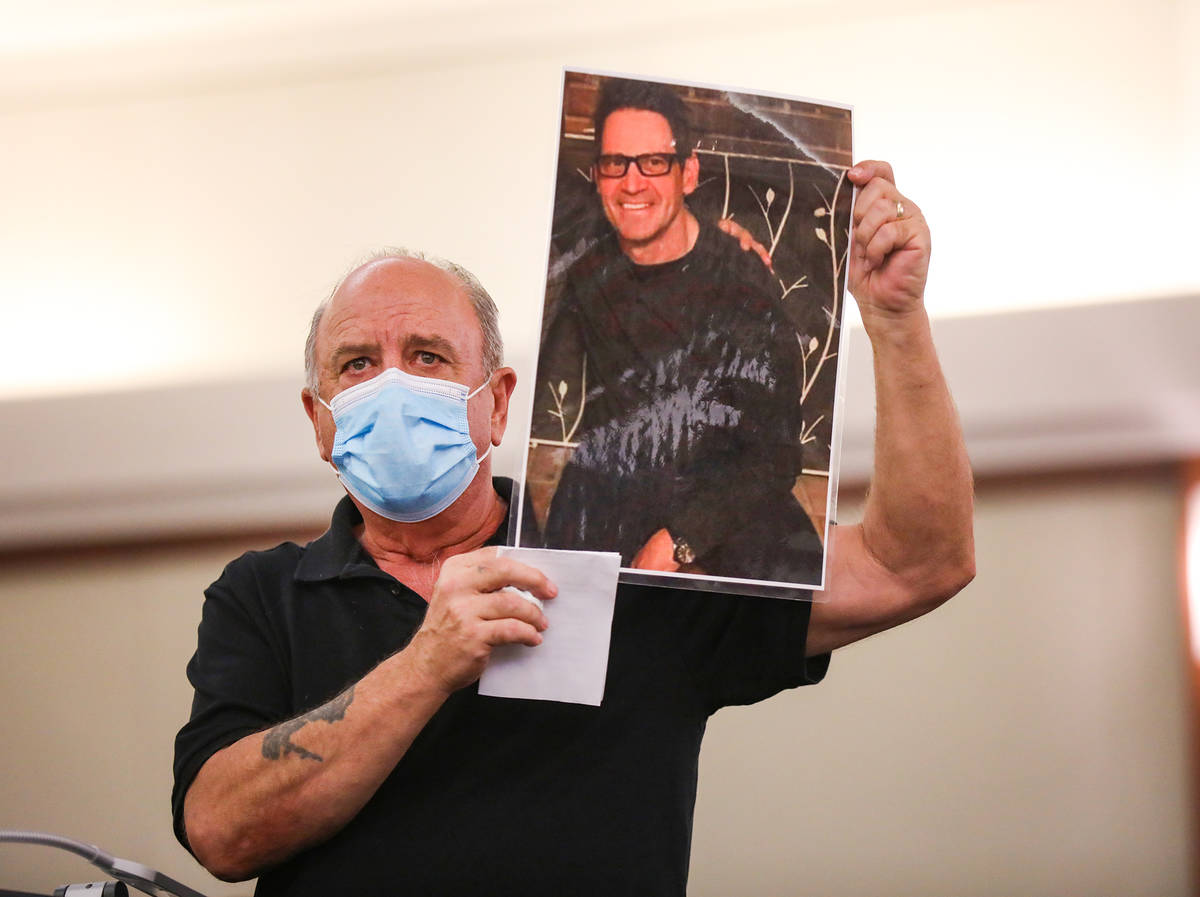 (Rachel Aston/Las Vegas Review-Journal) Douglas Murray, brother of victim Michael Todd Murray, who was killed by Jordan Barson in December when he crashed into a group of bicyclists, reads his victim impact statement to the court during a sentencing hearing for Barson at the Las Vegas Regional Justice Center in Las Vegas on Tuesday, June 8. 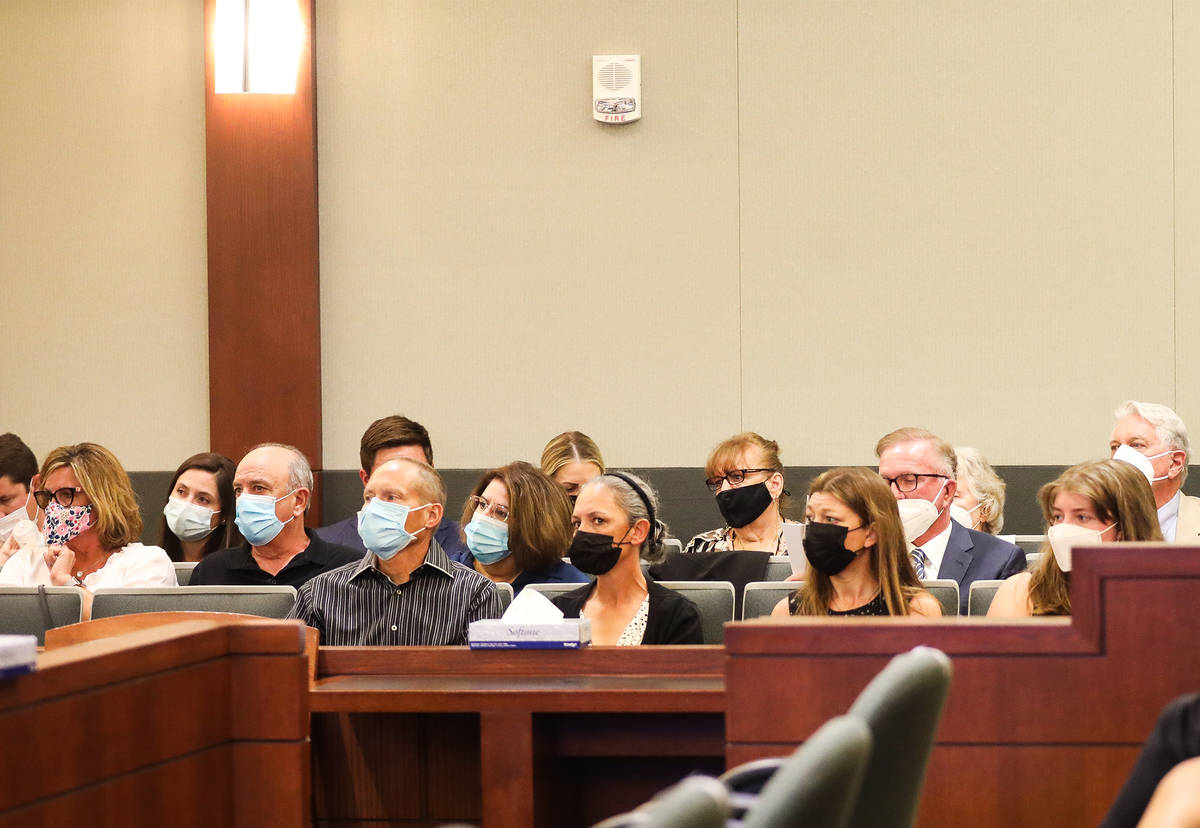 (Rachel Aston/Las Vegas Review-Journal) Family and friends of the five bicyclists who were killed by Jordan Barson, who crashed into them while under the influence of methamphetamine, appear in court for the first of a two-day sentencing hearing for Barson at the Regional Justice Center in Las Vegas on Tuesday, June 8.

In an emotional hearing, District Judge Bita Yeager ordered Jordan Barson to serve a sentence of between 16 and 40 years in prison.

It was the second day of a two-day hearing for the sentencing. During the first day, June 8, family members and friends of the five victims recalled cherished moments in the lives cut short on a clear morning in December as they rode along U.S. Highway 95 near Searchlight.

Jordan Barson, 45, pleaded guilty in April to two counts of DUI resulting in death and faced up to 40 years.

Chief Deputy District Attorney Thomas Moskal asked District Judge Bita Yeager to offer the families of the victims “some faith in the criminal justice system” in handing down Barson’s sentence.

“The price to be paid must be of the highest nature because the cost could not be greater than in a case like this,” Moskal said during the first day of the hearing. “The wounds inflicted by Mr. Barson will at best be mental and emotional scars as noticeable on these victims as if the scars were on their face when they looked in the mirror. At worst, the wounds will forever remain open and bleeding.”

‘All I have left’

Trauger’s widow, Donna, told the judge that her “world has come to an end.” She said he was her soulmate and best friend for more than 23 years.

She also said she was glad she was awake when he left for the ride that morning because she was able to kiss him goodbye in what would be the last time she saw him. She told Barson that he took her husband from her and asked the judge to give him the maximum sentence.

She said keeps her husband’s ashes in an urn on a dresser next to her bed. His toothbrush, razor and tag from a hoodie remain on the bathroom sink.

Ellen Leis of Colorado spoke via videoconference of her “fun, fierce, feisty and energetic” daughter, Ray.

“There is no true justice when a life, and in this case five lives, are taken,” Leis said.

Through tears she said Barson’s actions had changed her life forever, and she still suffered tremendous emotional stress from it. She also asked for the maximum sentence to be administered.

Murray’s family, like others, asked the judge for the stiffest sentence within her power.

“We have a hole in our family now that will never be filled,” his brother, Douglas Murray, said.

Because of the number of relatives speaking during the sentencing and pandemic courtroom capacity restrictions, the hearing took two days.

Barson’s guilty pleas accounted for each of the fatalities and show that he was under the influence of methamphetamine, which was found in his blood after the Dec. 10 crash.

Along with those killed, four others were injured. The plea agreement also accounts for two victims — Jose Vasquez and Jerome Ducrocq — who suffered substantial bodily harm in the crash.

Records show that Barson had more than nine times the amount of methamphetamine in his system needed to be considered legally impaired at the time of the crash on U.S. Highway 95 near Searchlight.

Barson, who resided in Kingman, Arizona, is being held without bail at the Clark County Detention Center.

The bicyclists were with a group of about 20 who set out from Henderson that morning to complete the roughly 130-mile Nipton Loop.

Barson appeared to cry as he spoke through a video stream from the jail, apologizing and asking for forgiveness.

“Knowing I caused the deaths of five people and severely hurt two others is unbearable most of the time,” he said. “I’ve caused so much pain in all of your lives, and I want you to know that I’m so truly sorry for what I’ve done. I know you will carry this pain forever, and it breaks my heart that I caused this. If I could give my life to bring your loved ones back, I would. I’m so ashamed of myself.”

Barson’s attorney, Damian Sheets, wrote in the sentencing memorandum that Barson did not intend to hurt anyone and that he was not trying to minimize or justify his conduct.

“Jordan (Barson) has expressed a desire not to ask for any particular sentence from the court, but simply the hope that the court will administer justice in whatever way it deems fit,” Sheets wrote. “For himself, Jordan’s only request is to minimize the suffering he has caused and hope that in time, his victims will come to forgive him and he may forgive himself as well.”