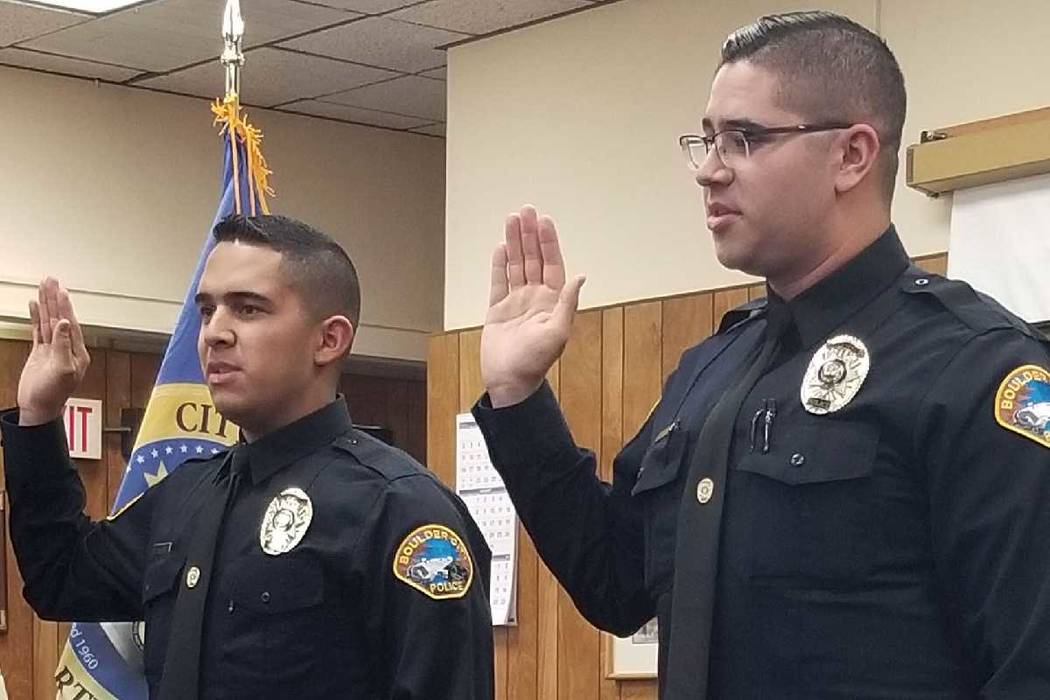 On Thursday, Dec. 13, Kevin Barakat and Kenny Calzada were sworn in to the Boulder City Police Department by Chief Tim Shea.

“I fell in love with the job during ride-alongs. … You’re never doing the same thing,” Barakat said. “You get to reach out and help people. … It’s nice to feel like you’re actually helping people instead of just talking to someone on the phone.”

Calzada agreed and said he had been exposed to a law enforcement career from family members and friends who were in the field.

Barakat said they both started in the Las Vegas Metropolitan Police Department’s Explorer program when they were 16 years old and switched over to Boulder City’s Explorer Post 198.

The Explorer post is an independent program coordinated with the Boy Scouts. It is fully funded by donations from the community and its advisers. It helps children learn about careers in law enforcement and teaches them leadership, community involvement and responsibility.

During their time in Explorer Post 198, Calzada and Barakat led the group as captain and lieutenant, respectively.

“They did a great job as leaders and knew how to hold people accountable as well as themselves,” said Boulder City Police Officer Scott Pastore, who restarted the program 10 years ago.

He is the head adviser of the post. Boulder City Police Sgt. Craig Tomao also advises the program’s participants.

“They’re incredible leaders,” Tomao said of Barakat and Calzada. “They had focus. They had drive. … They set the standard for the other Explorers.”

Seeing former Explorers graduate is a big moment for Pastore and Tomao, who are pleased by the achievements.

“They both had a good balance of personalities for jobs as police officers. … I’d like to think that I had a hand in helping them and in guiding them in that direction … I feel good,” Pastore said. “It’s like being a parent and seeing your child succeed.”

“I’m extremely proud,” Tomao said. “It’s like having a kid go through it. … The goal (of the program) is for them to be good people, but when they get a job in law enforcement, you’re especially proud.”

As for working in Boulder City, Barakat said he is excited about the small-town feel and being able to get to know the community rather than just seeing faces.

Calzada said he was excited about the community outreach.

“I’ll have the ability to find out who is who and help them,” he said.

Barakat and Calzada graduated from the Southern Desert Regional Police Academy on Wednesday, Dec. 12, and, according to the city, will now complete a 16-week-field-training program, where they will be assigned to different police officers who are experienced in conducting on-the-job training. Their hirings make the Police Department fully staffed.

“I am proud that so many men and women have decided to make a difference in their communities by becoming law enforcement officers,” Shea said. “We should all welcome our two new Boulder City police officers, who will help keep our neighborhoods safe.”