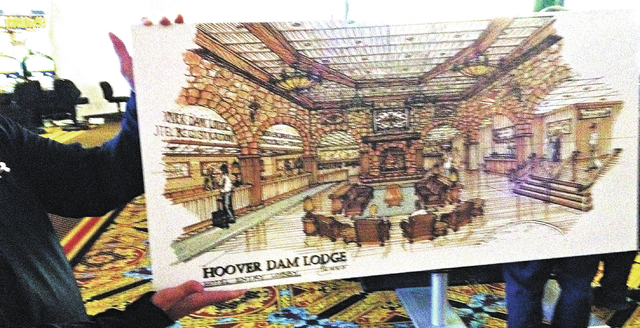 With its purchase of the Hacienda complete and renovations underway, Nevada Restaurant Services Inc., the parent company of Dotty’s, has reopened the hotel and casino on U.S. Highway 93.

After a five-day closure, the property reopened at 6 p.m. Saturday with a remodeled casino, including a Dotty’s tavern, coffee shop, steakhouse and hotel.

During a private tour, Craig Estey, CEO and founder of Dotty’s, revealed his plans for the 32-acre property and said he is hopeful the casino and hotel will become a place for locals to visit.

“I want to create a destination place for two types of customers: highway travelers and locals in Boulder City who need a place to call theirs.”

He said he believes the Dotty’s tavern, which was created to look like a grandmother’s kitchen, will attract locals, while the main casino, which is more open and airy than a typical casino, will appeal to travelers.

As part of his incentive to encourage area residents to visit, Estey said he will be giving Boulder City residents with proper identification a 25 percent discount on food at the coffee shop and steakhouse. He said that will extend to other restaurants and fast foot outlets when they are added.

Mike Eide, chief financial officer and chief operating officer, said they have spent about $7 million thus far transforming the property, installing temporary walls, turning the buffet into a coffee shop and replacing all the linens used in the hotel rooms.

Estey said he will give the once-Spanish-style property a “majestic lodge look,” complete with stone walls and a fireplace in the lobby. Taking one floor at a time, the hotel rooms will be stripped to the studs and everything will be replaced, including drywall, flooring and fixtures.

Once the renovations are significant enough to change the casino and hotel’s look, it will be renamed Hoover Dam Lodge.

“I don’t want to make promises and then underdeliver,” Estey said. “I want to do it right.”

This is his first experience operating a hotel and casino.

Before starting the Dotty’s business model in Oregon and bringing it to Nevada in 1995, Estey operated concessions for the National Park Service.

“It’s fun,” he said of the transformation already taking place a the property, “to have such as unique opportunity and have that background and see the vision of what we can do.”

His enthusiasm was evident as he walked throughout the casino, pointing out changes that have been made and what he envisions for each space.

He also apologized in advance for any inconvenience the remodeling process may cause his guests.

Currently, the west end of the casino has been partitioned off so that another Dotty’s tavern and a Bourbon Street sports bar can be built. They will flank the exterior walls, with a central walkway to the main casino featuring an interpretive center with museum-quality displays about Hoover Dam, Lake Mead National Recreation Area, local wildlife and people indigenous to the area.

Additionally, Estey said he plans to include a travel services desk with a concierge to provide information about raft trips, helicopter rides and area attractions.

Renovations and additions to the property are planned in four phases, Estey said. The first phase, which began immediately after the sale was finalized, includes turning the main casino into several smaller themed casinos each with its own promotions and rewards but linked to the master Dotty’s system, changing the exterior of the property to reflect the lodge theme and redoing all of the hotel rooms.

The second phase will focus on area across the street where the closed gas station sits. Estey said he plans to create a travel plaza with a gas station and gift shop. His hope is to construct a “sky bridge” across U.S. Highway 93 linking the sites together.

Phase three or four, depending on demand, will include building a new group of high-end hotel rooms overlooking the lake.

“The best view of the lake is from the parking lot,” he said. “I am also playing with the idea of an RV park/campground, picnic area and a possible truck stop.”

Estey said the timetable for the additions, if they happen at all, will depend on the success of the changes he makes at the property.

About 150 of the Hacienda’s more than 200 employees were offered positions with the company, either at the property just outside the city limits or another Dotty’s location.

“I met with the staff last night and walked the property. One young girl who had been with the Hacienda a long time, came to me almost with tears in her eyes and said ‘Thank you for coming to the Hacienda,’ ” Estey said. “It’s a fresh start.”

Once all the renovations are completed and if they are able to add all four phases, Estey said they will employ considerably more people than what originally worked at the Hacienda.

Estey said it he anticipates it will take at least six months before they start seeing any significant results with the changes that are being made.