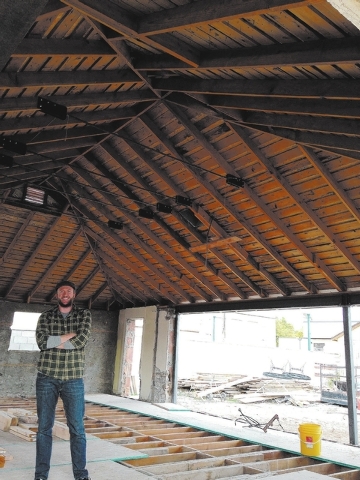 Soon there will be a new place to party in Boulder City.

A new event center is tentatively scheduled to open in May, said Grant Turner, owner of The Dillinger restaurant, who is opening the facility.

Adjacent to Boulder City Police Department at 553 California Ave., it’s hard to tell that the unnamed event center, which is under construction, was formerly a duplex.

“I made it a one-plex with a sledgehammer,” Turner said.

When the renovation is complete, Turner said the center will have a “real raw” industrial design with exposed ductwork, intricate wood and concrete flooring, and a large mural on one of the brick walls.

A kitchen will be added to the structure, as well as a bar with a “sleek and modern” design, Turner said.

The wall leading out to a courtyard also was removed and will be replaced with sliding doors.

The center will be “very open with a lot of sunlight,” Turner said.

In a sense, the design will incorporate an attention to detail similar to that of The Dillinger, which opened in 2011, but better, Turner said.

“(The Dillinger) has taught us a lot and we’ve gotten better,” he said.

Turner purchased the property in 2012, but didn’t initially know what he was going to do with it.

“I just loved the building,” he said. “It just always stuck out to me, the way it was situated and the materials they used.”

He said he decided to open the event center because The Dillinger is unable to close for special events.

“We’re so dependant on our regulars that we can’t shut down for special events.”

The Dillinger does try to meet occasional catering requests, but that too is difficult, Turner said. For a recent catered event with 600 guests, The Dillinger had to rent another local kitchen.

With all the parks and churches in the area, Turner said he thinks weddings will be the facility’s most popular event. Turner has already has two weddings booked for later in the year.

However, he said, anything goes, including bachelor parties, football parties and concerts, because a sound system for live music is planned, too.

“There’s no limit. If you want a good space to do it, we can do it, and we can facilitate the food and beverage portion,” he said.

Turner said he also would like to host specialty dining events at the facility with “really high-end food and wine.”