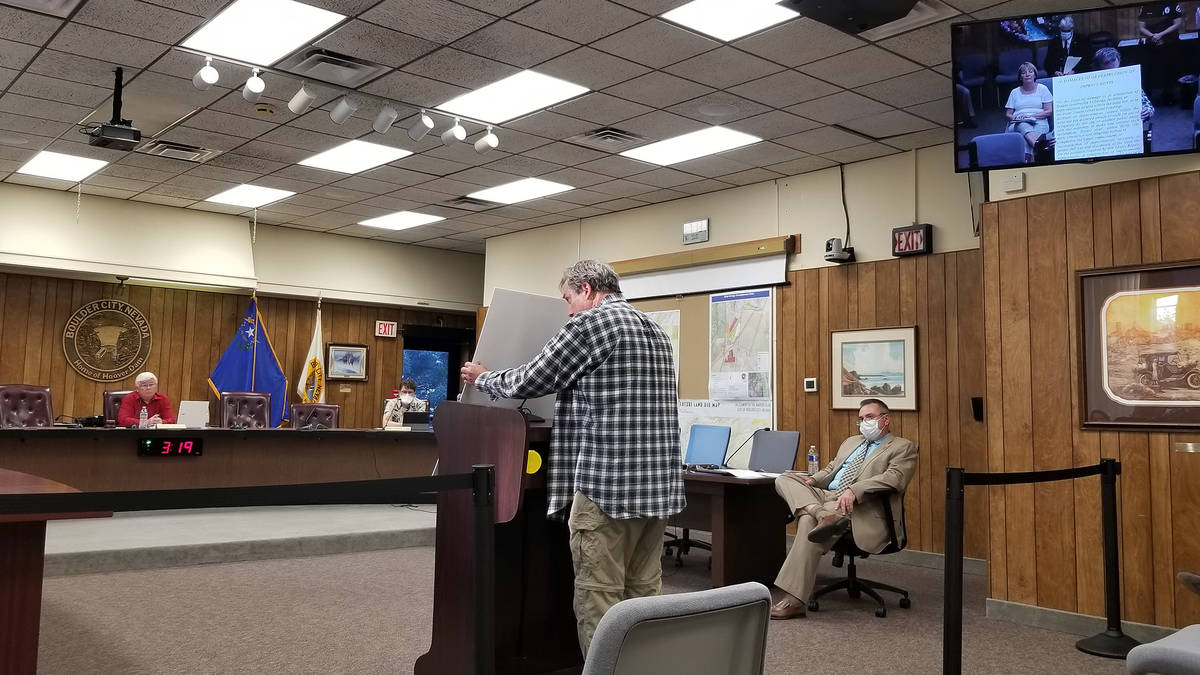 Celia Shortt Goodyear/Boulder City Review Rob Martin talks to City Council during a public comment period at Tuesday,'s June 23, meeting. It was the first time the public had been allowed to attend a meeting since March.

Boulder City is moving forward with hiring a new deputy fire chief despite a dissenting vote from the mayor.

On the agenda for Tuesday’s, June 23, City Council meeting was a discussion and possible staff directive about filling the vacant deputy fire chief position. It is already funded for the 2021 fiscal year and was not part of the open positions recently frozen to save money.

Fire Chief William Gray said he and the deputy chief are responsible for being the incident commander for all fire calls that come through the station. The deputy also covers Gray’s duties during his absence and helps with operational duties.

Mayor Kiernan McManus said he was concerned with hiring someone when the city does not know what revenue it will receive from the state due to fallout from the current pandemic.

“We need to have a much better idea of what the finances of the city are going to look like,” he said. “Right now we don’t really have that information.”

Currently, Steve Walton, former interim fire chief and chairman of the city’s planning commission, has been filling the deputy role under his contract with Management Partners. Gray said that contract ends June 30 and they need to fill the position. If it’s not filled, he would have to take a fire captain and make him incident commander of calls when he is not there.

“The reality is the fire captain is responsible to be on the hose line inside the fire. … If he’s not going inside, then we’re going to send somebody with less experience inside that doesn’t understand fire conditions,” Gray said. “So it creates a huge risk to those firefighters inside. … I think it’s a critical position. I feel like we needed it when I showed up.”

McManus suggested finding a temporary solution until the city had a better understanding of what revenue it would receive from the state. He also suggested seeing if Walton could stay on.

“I understand the position it puts you in, but it sounds like the department has been in that position for quite some time,” he said.

“Would you say that this is an issue of public safety, that there be a second person?” she asked Gray.

Councilwoman Tracy Folda said she understood where McManus was coming from, but she went back to the 2021 budget council approved in May.

“It’s already been tagged for so I don’t see us changing our budget at this time,” she said.

Tuesday’s meeting was the first since the beginning of March that allowed limited in-person attendance. Two members of the public were present.