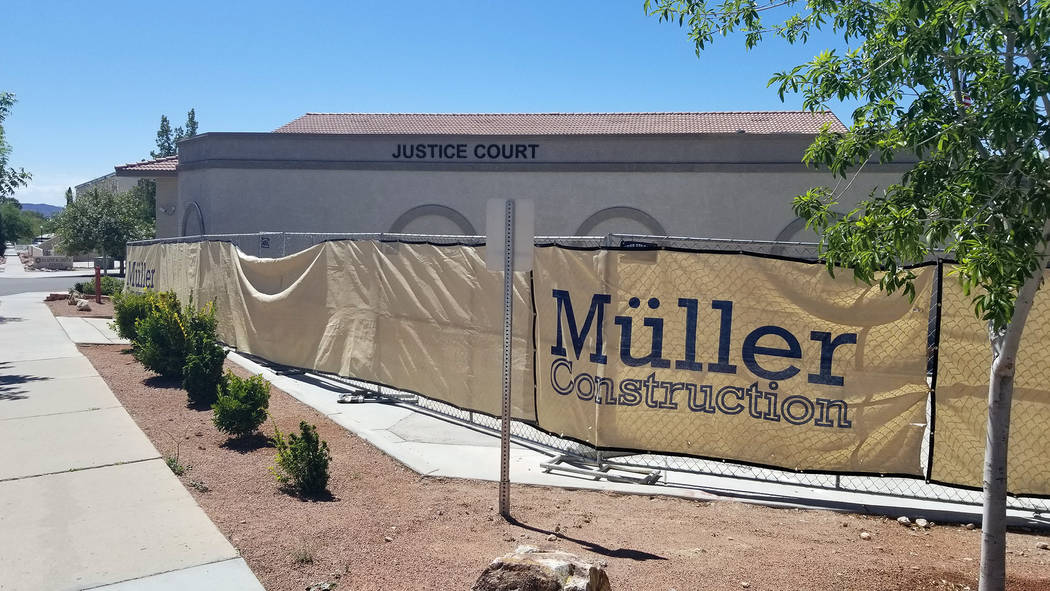 The contractor renovating Boulder City’s courthouse could be banned from public works projects for three years because of allegedly underpaying employees for a project in Las Vegas.

This possible ban will not affect its current projects, according to the state’s Office of the Labor Commissioner.

Müller Construction was awarded a $219,529 contract in June for the addition to the municipal courthouse at 501 Avenue G. The company was the lowest bidder. Boulder City Communications Manager Lisa LaPlante said the project is 95 percent complete and should be done in May.

On April 18, the Nevada Labor Commission issued a determination disqualifying Müller Construction from public works projects for three years and requiring the company to pay more than $92,000 in back pay and $130,000 in penalties for failing to pay the prevailing wage to 28 workers who were creating bollards in the company’s parking lot, according to a letter from the labor commissioner’s office sent to the company’s attorney, Robert Kern.

“We will be appealing, and that means this decision will not go into effect until the appeal is resolved,” he said. “We are shocked that the commissioner would make a factual determination — ruling that Müller’s work yard at their headquarters was set up solely for this project, despite us offering testimony that it was otherwise — without taking evidence or testimony.”

Müller Construction had been awarded a $5 million deal in June 2017 by the Clark County Commission to install hundreds of bollards along the Strip. Bollards are 4-foot steel posts rooted into sidewalks to protect pedestrians from vehicles. They are anchored 15 to 18 inches beneath the ground by interconnected steel frames.

According to Teri Williams, public information officer for the state Department of Business and Industry, Müller Construction has 15 days to appeal the decision and request a hearing.

“The Office of the Labor Commissioner has issued a determination against Müller Construction,” she said. “Müller Construction, through their attorney of record, has indicated they will appeal the determination. Once the appeal has been filed, additional administrative and legal proceedings may occur until a final administrative decision is reached, which can also be subject to a petition for judicial review. The determination that was issued does not impact the current contracts until such time as the matter is fully resolved.”

Kern said the company will appeal the decision to the labor commissioner and the courts, if necessary.

The Labor Commissioner’s determination contradicts an audit performed by Clark County in early 2018 that concluded Müller Construction had underpaid 14 workers by nearly $3,300 but overpaid 14 by close to $5,500.

Kern said the Labor Commissioner’s jurisdiction to overrule that finding by Clark County expired 30 days after the decision. It has been more than 388 days.

State auditors began the investigation into Müller Construction about a year ago after the Nevada Foundation for Fair Contracting, a nonprofit labor management watchdog that accused the company of underpaying workers, first lodged a complaint with the county.

The foundation then argued that the county’s subsequent audit into the matter had not been thorough enough.