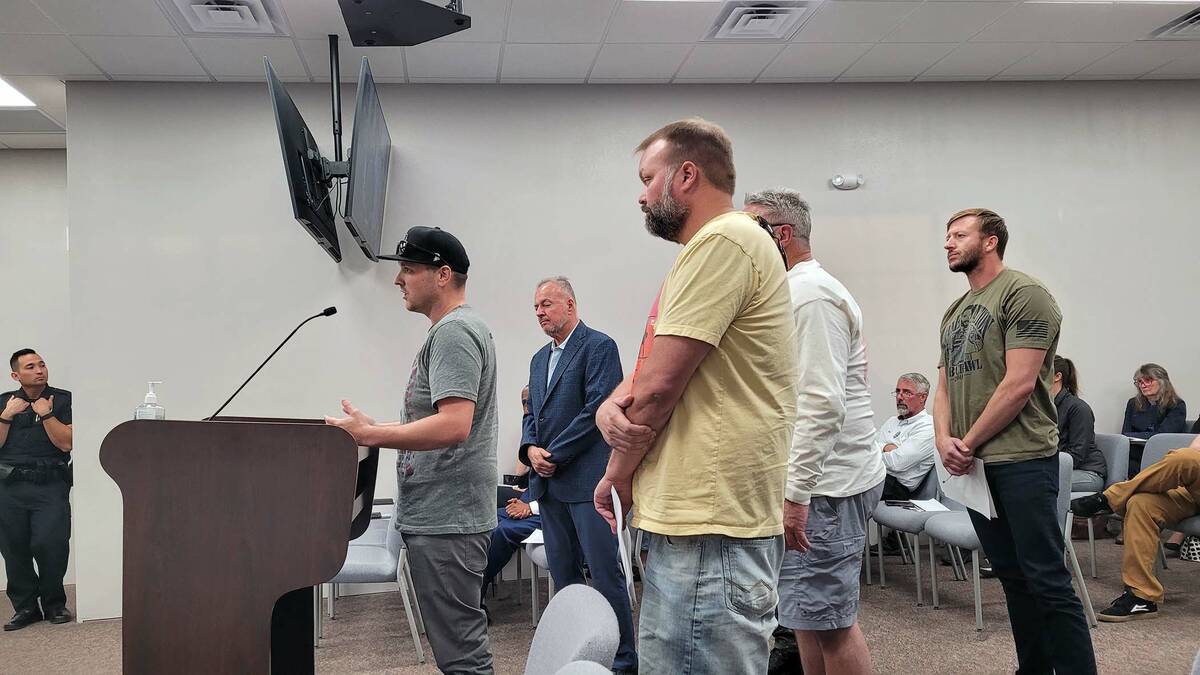 Celia Shortt Goodyear/Boulder City Review Chase Patton, Shane Patton's younger brother, discusses why he and the Shane Patton Foundation are requesting the statue of his brother be located at Wilbur Square Park, 200 Park St., during the Tuesday, April 26, 2022, City Council meeting. Other members of the foundation surrounded him during the presentation.

At their Tuesday, April 26, meeting, City Council members expressed their support for the statue but some were concerned about its proposed location at the center of Wilbur Square Park, 200 Park St.

Councilwoman Claudia Bridges said she thought the statue was a wonderful idea but she had some questions about its size and proposed location.

“Who would you want to be … the group of people to come and appreciate this? … For the most part, it’s local, residential people out there, walking dogs, hanging out,” she said. “There’s not a lot of activity out there when we’re not having special events.”

She also said she wasn’t sure about the statue being 1 ½ times larger than life-size and wanted the city’s Historic Preservation Committee to weigh in on the proposal.

Chase Patton, Shane Patton’s younger brother, said the proposed location was chosen so that it could inspire others.

“Our goal is for this statue to draw inspiration, motivation, courage and things along those lines for future generations that may want to take a look at it, learn about the story and all that,” he said.

Shane Patton grew up in Boulder City and was one of 11 Navy SEALS and eight U.S. Army Special Operations aviators killed June 28, 2005, during Operation Red Wings in Afghanistan. The story of the battle was told in the book “Lone Survivor: The Eyewitness Account of Operation Red Wings and the Lost Heroes of SEAL Team 10,” by survivor Marcus Luttrell, and its subsequent movie, “Lone Survivor,” starring Mark Wahlberg.

Chase Patton also said they want the statue to help drive people through town and have as many people see it as possible.

“This is something that is huge for my family. … There are three generations of us here in Boulder City that this would mean a heck of a lot to,” he said. “Our whole goal really is just to draw the most inspiration we can possibly get and hopefully inspire (others). We don’t want this piece to be up here in the park to make anybody sad or depressed or anything. We want this to be a solid motivational piece for future generations.”

Councilwoman Sherri Jorgensen said she agreed with the size of it and putting it in Wilbur Square Park.

“When someone goes to serve our country, it’s in place of us,” she said. “We don’t go, and I have a deep debt of gratitude for what you and your family have offered for us to have the freedoms we have today. I don’t mind where it’s at and I don’t mind the size.”

“I love the size and would love to see it sitting over there for the world to see,” he said.

He did ask why it was being done at 1 ½ times life-size and whether it could be done at just life-size.

Chase Patton said the statue would be about 11 feet tall and the 1 ½ times is the standard for this type of statue. Additionally, it would only stand about a foot higher than the turbine at Wilbur Square Park and would be shorter than the 25-foot trees there now.

Councilman James Howard Adams said he supported the project but wanted guidelines to be created for putting this type of thing on city property as well as having the Parks and Recreation and Historic Preservation committees weigh in on it.

“It’s important this be appreciated in a well-thought-out manner,” he said.

He also suggested Veterans’ Memorial Park as a location for the statue.

Mayor Kiernan McManus said he supported the foundation and its work. He also said he thought the size of the statue is appropriate depending on where it’s placed and that Veterans’ Memorial Park would be a good location.

Council unanimously approved having staff draft a formal guideline for putting a permanent structure on city land and that the statue and proposed location be reviewed by the pertinent advisory boards before the project comes back to them for possible action.