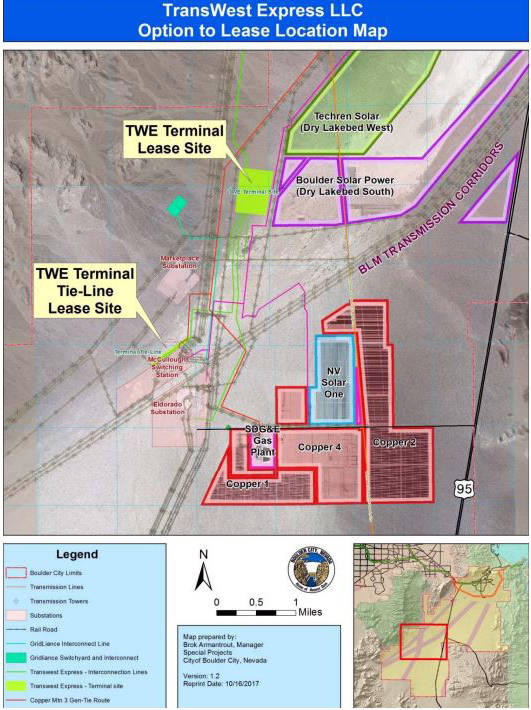 Boulder City At its meeting Tuesday evening, City Council approved an option agreement and lease with TransWest Express LLC for a direct-current transmission line originating from Wyoming that will harness the power of the wind. 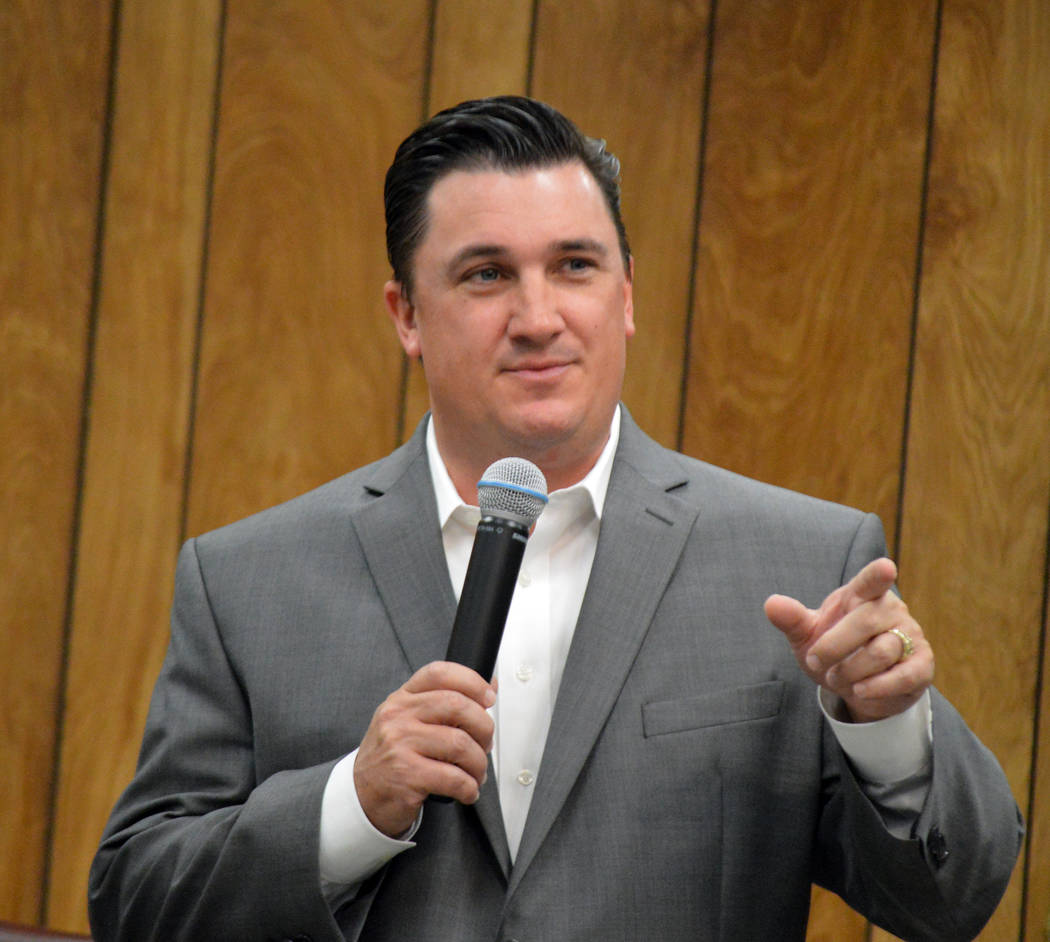 Boulder City is adding wind power to its portfolio of renewable-energy leases as the City Council approved an agreement for a direct-current transmission line from Wyoming.

The TransWest Express Transmission project is a high-voltage and direct-current regional electric transmission system. It delivers cost-effective and renewable energy produced in Wyoming to the Desert Southwest region of Nevada, California and Arizona. TransWest Express LLC proposed the project and has been working to bring it to the Eldorado Valley for approximately 10 years.

“TransWest Express is a direct-current transmission line extending from Wyoming all the way through to the Eldorado Valley substation complex. … It is a terminal, meaning end of line … it will convert the direct-current energy to alternating current and then distribute it to the four substations in the valley to whoever the customers may be taking delivery,” said Brok Armantrout, special projects manager for the city, at Tuesday’s City Council meeting.

According to Bill Boyd, TransWest Express’ executive vice president and chief operating officer, the line from Wyoming to the Eldorado Valley in Boulder City is 730 miles long. The company has been working with the city to lease 168.5 acres of land to house part of it.

The agreement presented to City Council on Tuesday included a seven-year lease-option period that would expire in November 2024, paying the city $33,600 a year for the first three years the land is reserved. The amount would increase to $42,075 for years four and five and $56,100 years six and seven.

“The reason we have an option as long as this is because you never know somebody may decide to sue us and stop the project for a period of time while we go through court,” Boyd said. “Those kinds of things can happen. We’re trying to mitigate all that. We truly appreciate all the hard work. Your staff … has really been a big help.”

He also said that he hopes to have people on the ground in 2019 building the line.

“After 10 years, we have all our permits in place,” he said. “We’re ready to start building as soon as we get our commercial deals done.”

The option agreement also would prevent the company from accruing Clark County property taxes until it signs the actual lease for the land.

Once TransWest ends the lease option, it would begin a 45-year lease for the land at a cost of $1,650 an acre, its current appraised value. That rate would be adjusted upon a current appraisal at that time. There would also be a 2 percent increase in rent each year and two options to extend the lease, one for a 30-year period and a second one for 24 years.

Councilman Rich Shuman asked whether the lease was drafted now or would be done once the lease option is exercised. Armantrout said it is drafted now, and the only change would be the monthly lease amount should the appraisal change.

Councilwoman Peggy Leavitt said the she appreciated staff’s work on the project and was excited that the wind would be coming from her home state of Wyoming.

“I look forward to the arrival of wind power,” said Councilman Warren Harhay. “It really will cement our position as a leader in energy renewables distribution. Of course, we already have solar and we have the benefits of Hoover Dam, hydro, and the wind will certainly be a wonderful addition to that triad in the future.”

In addition to thanking city staff for their work on this project, Councilman Kiernan McManus said that he was glad to have additional technology coming to the area.

“I just want to bring up … that this is a DC line versus an AC line, which I’m sure is not unique but it is a different technology than most companies use,” he said. “And again (I’m) glad to see that what is coming into the valley down there are things that are being tried to improve the systems.”

Neal Siniakin was the only resident to speak during the public comment period and said that he thought the city should reassess the monthly rent and land appraisals every five years as the lease is 45 years long. If not, he said that the 2 percent fixed rate could come back to hurt the city.

■ Heard a presentation from Lorna James-Cervantes of the Clark County School District regarding Assembly Bill 469 which reorganized large school districts.

■ Approved an amendment to the agreement between the city and the Southern Area Communication Council at the West Water Tank communication site to provide public safety radio communication services.

■ Awarded a $228,511 bid to CG&B Enterprises for the Lakeview Park Improvements. Its bid was the lowest of the four received, and the funding source for this project is from the Community Development Block Grant. As part of the bid, the city also approved amending the expenditures and revenues for the 2017-2018 fiscal year budget.