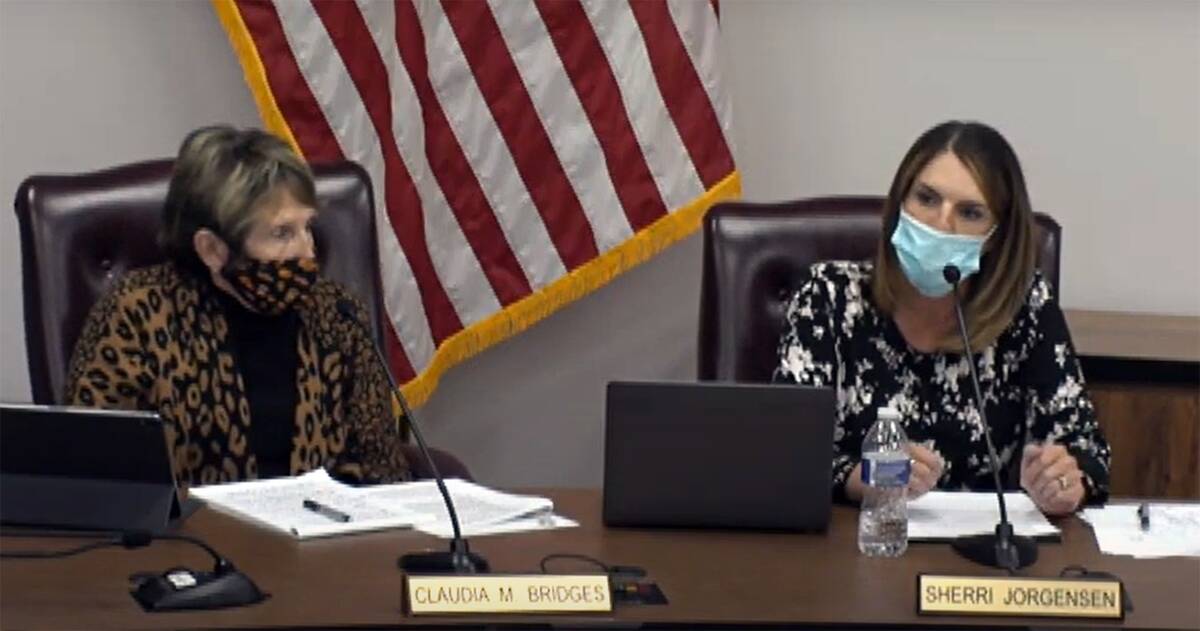 (Celia Shortt Goodyear/Boulder City Review) Councilwoman Sherri Jorgensen, right, discusses a text amendment to allow funeral homes and mortuaries as conditional use in the C1 neighborhood commercial zone as Councilwoman Claudia Bridges looks on. Council approved the amendment in a 3-2 vote at its meeting Tuesday, Nov. 23.

At Tuesday’s council meeting, more than 50 people provided comment, mostly opposing a text amendment to allow funeral homes and mortuaries in R1 single-family residential and C1 neighborhood commercial zones. Currently, they are allowed as a conditional use in C2 general commercial and CM commercial manufacturing zones.

“All we’re trying to do is make it so we have more options out there,” he said.

Smith said his Boulder City and Henderson locations are at capacity and, if a property like a church, became available, he would like to be able to move forward with it.

Those who were not in favor of the change expressed concern about their property losing value and the increased traffic a funeral home or mortuary could bring to a neighborhood.

“It would be irresponsible to not consider this impact on residents. … I respectfully submit that such a proposed business as a mortuary should be located in a pure commercial zone, and not be shoe-horned into a residential zone where many residents and citizens of Boulder City will be forced to take a significant financial hit,” wrote Jeff Johnson in his emailed comment.

Resident Bruce Smith said the “overall thing” with the amendment is “money” and his property value is going to go down if it’s passed.

“I’m going to lose value in my house for something I don’t want,” he said.

They also expressed concern about the possibility of a crematorium eventually being put in at the mortuary.

Smith said that “fear should be put to rest” because his crematorium is in Henderson and he isn’t planning on putting one in Boulder City.

“It’s just a challenge to find anything that would be suitable,” Smith added. “What we do need is a chapel that would seat up to 125 people and we need offices inside of the funeral home. I’m looking for possibly three offices, four offices, (and) a couple of arrangement rooms to sit with families and make arrangements.”

Those who supported the amendment said they wanted to make sure Smith could keep his business in town.

“Funeral homes are supposed to be a part of the community, not on the outside,” Allen Calvert wrote in an email. “As anyone that would be interested in moving a funeral home into the area would still need to get approval even with the zoning amendment, I see no reason why this change is not appropriate as everything still has to be approved on a case by case basis.”

Others simply encouraged the council to do what was best for the community.

“I fully recognize the weight that’s on your shoulders as City Council, and I recognize that the decisions that you make, the policies that you set will define this community for generations to come. … I pray that you reflect and make the decision that is in the best interest of our community,” said Stephen Gay.

Councilman James Howard Adams asked Smith what about the C2 zone didn’t work for a mortuary.

Smith said the “spacing is too tight” and there is no building large enough with enough parking.

“It’s not about me,” he said. “It’s about the community … I love our community. I love my neighbors right here. … I promise if I was in someone’s backyard, I would be the best neighbor I could be.”

Since they are a conditional use, Smith, or anyone else, would have to go before the Planning Commission for approval to open a mortuary at a specific property.

During their discussion, the council members agreed they had to look at this request objectively and not personally.

“I do understand the need for a mortuary. … This is not about a specific business owner,” said Mayor Kiernan McManus. “It is the type of businesses that are to be allowed to operate in residential areas.”

Jorgensen also said she believes mortuaries are an essential business.

Jorgensen also said she wasn’t comfortable with mortuaries being allowed in the R1 zone, but she did think it could work in the C1 zone because they would have less of an impact than some of the currently permitted uses in that zone like grocery stores.

Councilman Matt Fox agreed and said it’s hard to find the right location in town for a business because there isn’t much available. He also said he’d be OK with a mortuary in the C1 zone.

Both McManus and Adams said they did not agree with the amendment because of the amount of public opposition to it.

“They have stated their fears and concerns over the financial impact it might have on their property values,” said Adams. “There are concerns about the quality of life they have come to expect in Boulder City.”

McManus said he thought this amendment did not promote the general welfare of the city because of the opposition to it and that it didn’t comport with the city’s comprehensive plan.

Jorgensen made the motion to approve the amendment but only allow mortuaries in the C1 zone. Council approved it in a 3-2 vote with McManus and Adams voting against it.