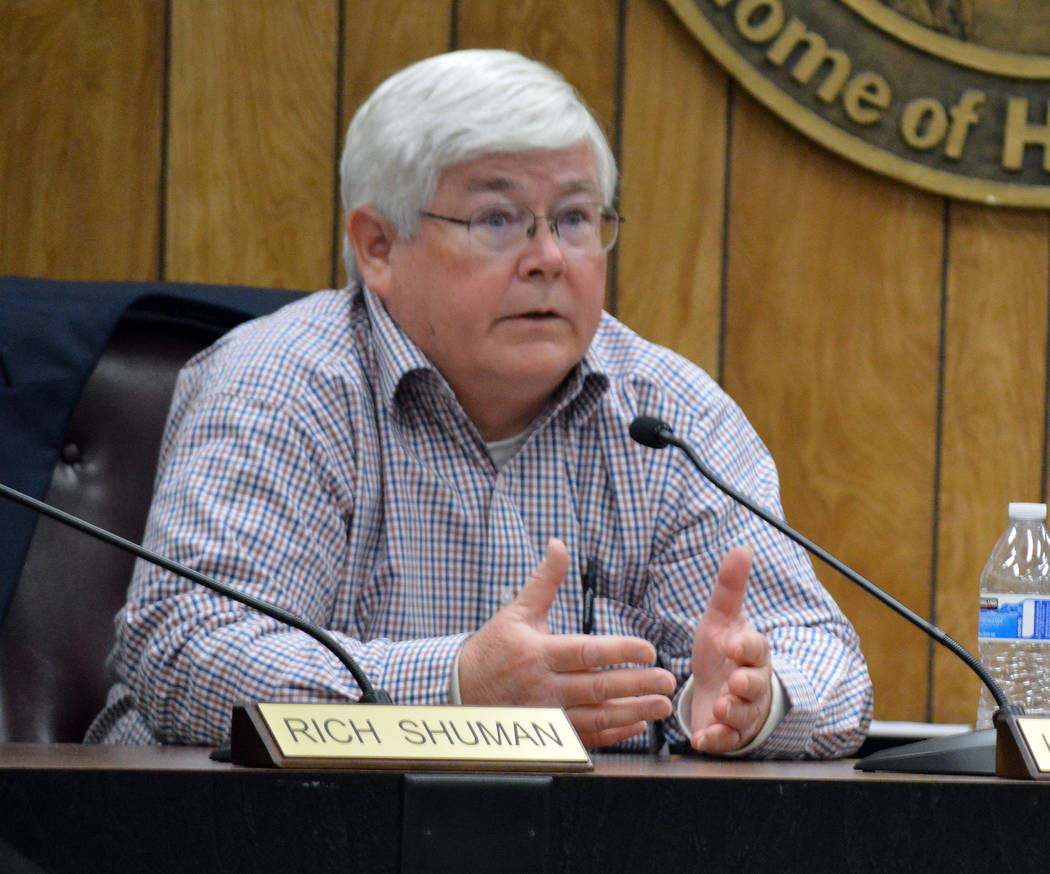 Celia Shortt Goodyear/Boulder City Review Councilman Kiernan McManus explains why he is not in support of the city attorney contract for Steve Morris at the City Council meeting which started Tuesday and ended the next morning. 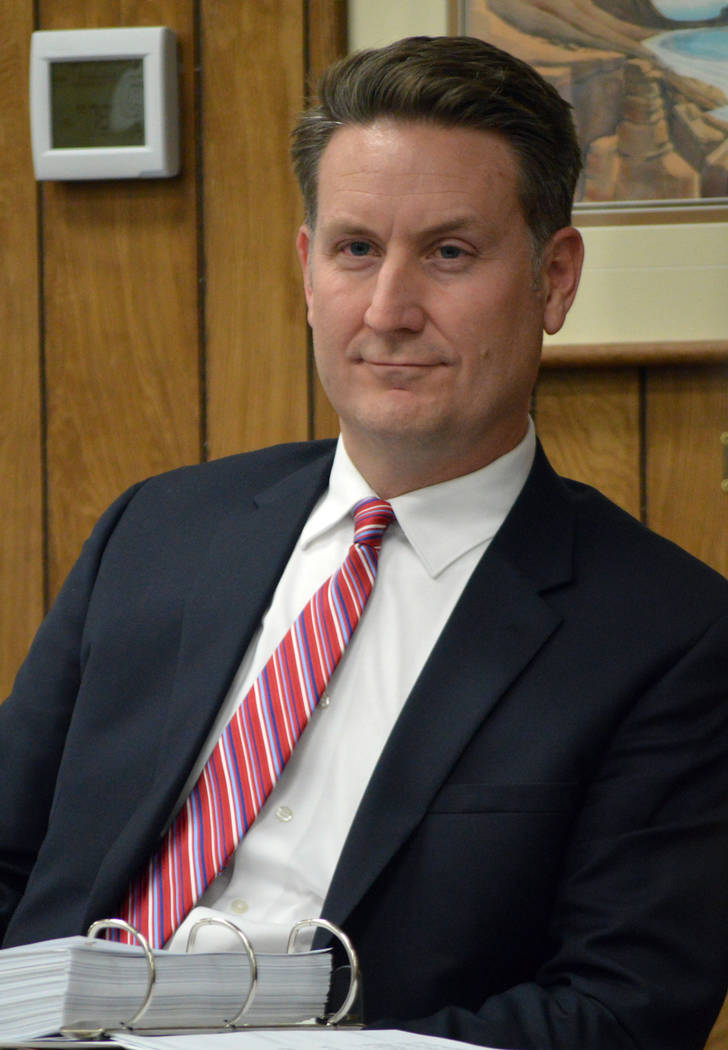 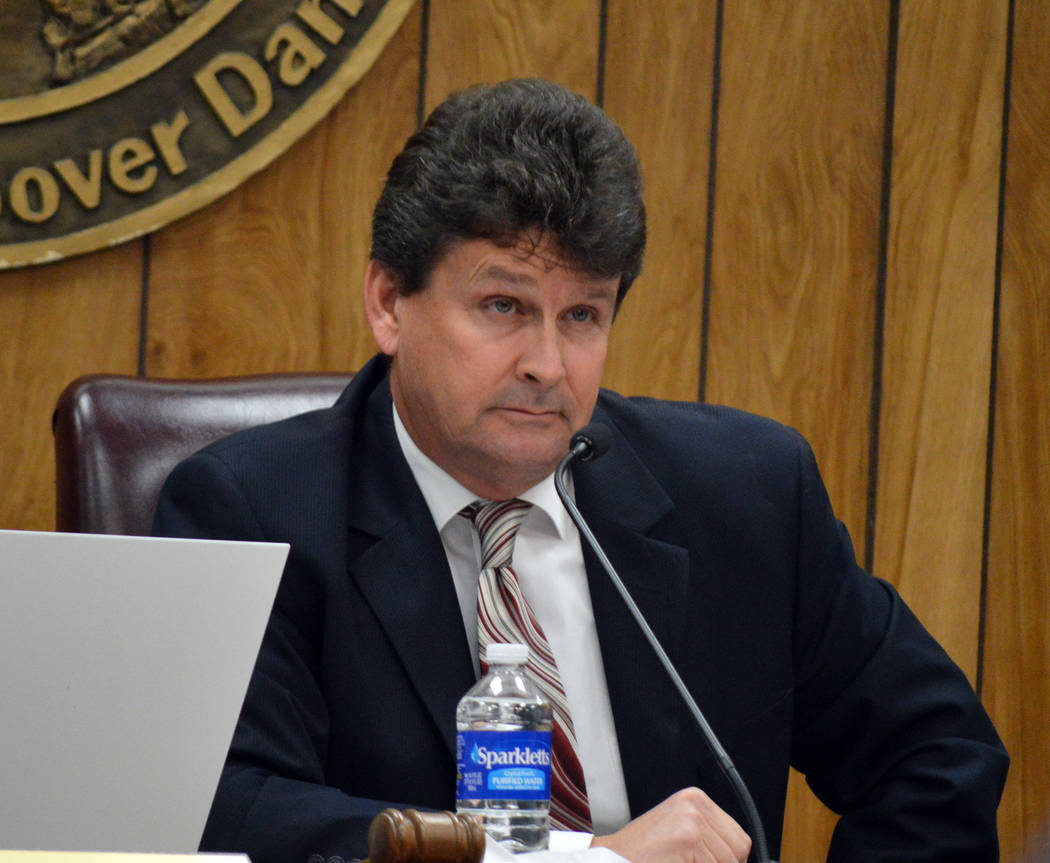 At its almost six-hour-long on meeting Tuesday, Council approved contracts for new City Manager Alfonso Noyola and new City Attorney Steve Morris, both in a 4-1 vote.

Noyola will receive two weeks annual leave and two weeks sick leave right away. In addition, he will receive insurance and retirement benefits as well as $150 and $500 a month allowances for a cellphone and vehicle, respectively. According to the contract, he will need to establish a residence in Boulder City “within a reasonable amount of time after employment begins.”

Councilman Kiernan McManus said he could not support the contract without a definition of a “reasonable time.” He said that he had requested that Noyola’s Boulder City residency be established within six months of his employment beginning.

“I don’t remember if we agreed on that,” said Mayor Rod Woodbury.

Noyola said that discussion had come after Council had agreed on the tentative agreement and was made by only one Council member. He said that due to the limited number of houses for rent or sale in town, he may not be able to meet a six-month deadline.

Morris agreed with him.

“It is an objective standard, but our charter is clear in that respect. … If it comes outside what Council deems reasonable, then Council has the opportunity to take action on that,” Morris said.

Councilwoman Peggy Leavitt said she knew Noyola wants to be a part of the community and has every intention of moving to Boulder City.

“If we as a Council feel like he’s not fulfilling that part of the contract, then we need to bring it back before the Council and make an issue of it,” she said.

Councilman Rich Shuman said he agreed with the contract as written.

“I’m looking forward to joining the city and staff and to continue the good work of Boulder City,” Noyola told the Boulder City Review after his contract was approved.

Noyola is expected to start his new position by March 26.

After an almost three-hour-long executive session to negotiate Morris’ contract as city attorney, Council approved giving him a base salary of $170,000 along with being credited four weeks of annual leave and two weeks of sick leave. His contract also allows him to accept other employment as long it would not “in any way interfere” with his duties in his contract.

In addition, he will receive $150 and $500 a month allowances for a cellphone and a vehicle, respectively.

Former City Attorney Dave Olsen’s base salary was $127,717 in 2016, according to Transparent Nevada.

“As indicated during closed sessions to the other Council members, I am not in favor of this agreement,” McManus said before the vote. “I feel that this agreement is an affront to the citizens here in Boulder City. I don’t think that is in the best interests of the city. I have made that clear during the discussion we had. Rather than go through the importance of some of these things that are included in this, it was probably just best not to say (anything) further on it. Clearly the Council has set its mind that it was going to adopt this. Again, I think it’s odorous.”

At the beginning of the meeting several residents voiced their opinions against hiring Morris as city attorney. One reason was because in his application he had disclosed that his son had been a city employee; the city charter prohibits hiring someone who has a relative already employed by the city. According to TransparentNevada.com, his son worked as a lifeguard at the city pool in 2016. There was no employment information available for 2017.

Morris also came forward during public comment and shared the Constitutional right citizens have for freedom of religion and that it does not give public employees freedom to use their personal beliefs to further their official positions.

“The greatest threat to our unique way of life is from within and manifestations of bigotry, intolerance, personal attacks, character assassinations, and general incivility,” he said. “It is my hope … that we as a community can come together to secure and uphold these principles as set forth in the United States Constitution and the Nevada Constitution and bring civility in our public discourse and dialogue back, and I ask the citizens to join me in this effort.”