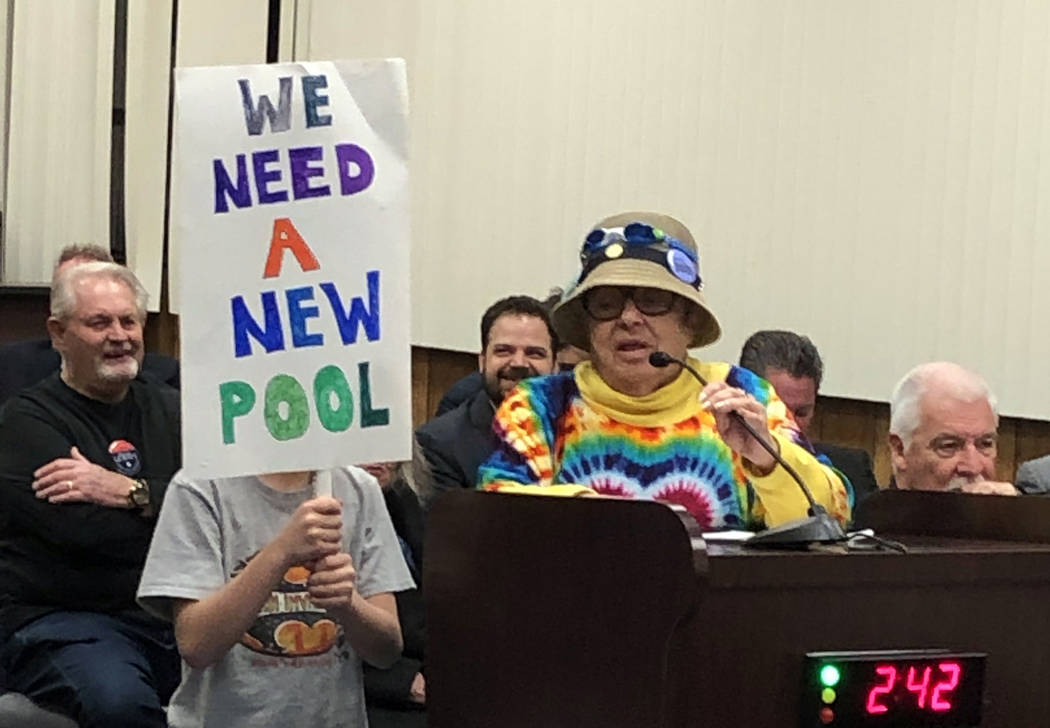 Boulder City Jan Miller and her grandson show their support of a new pool during Tuesday's City Council meeting on Feb. 26.

Boulder City is still moving forward with a ballot question seeking voter approval for issuing up to $40 million in bonds for a new aquatic center despite one council member’s desire for the question to be repealed.

In January, the City Council approved two ballot questions for the June 11 election about financing a new aquatic center.

At the Tuesday, Feb. 26, meeting, Councilman Warren Harhay requested the $40 million question be removed from the ballot because he said he was concerned officials were taking the wrong direction with the project.

He said he felt the decision was rushed because the council members found out at the Jan. 8 meeting that they had to vote on the bond question that night.

“I think that is an inappropriate way to consider a large project like this,” he said. “I don’t like to make decisions under the gun of a time limit. … From my experience, rush decisions never turn out well.”

Harhay also said they don’t have hard facts on the price. The new aquatic center is estimated to cost approximately $30 million now, but city officials asked for $40 million to allow for inflation and contingencies. He said he thought there were other funding options available than bonds and would like those to be researched.

“I believe there are other funding options out there,” he said.

Harhay made a motion to approve repealing it but could not get a second.

Councilman Rich Shuman said that the City Council needs to move forward because the question was already approved.

“Once you pass something, it gets moving. … It gets going,” he said. “Departments start working on it. … To pull it back once the wheels have been rolling doesn’t seem right. No matter what the question is.”

“I think at issue here is the price tag,” Councilman Kiernan McManus said.

But he said they should go ahead with the question and see what the public wants to do.

Mayor Rod Woodbury also said he thought the public should have a chance to weigh in on the bond question.

“All we can do is put it out there and see what they want to do. … There is an appetite from the community to weigh in on this,” he said.

Councilwoman Peggy Leavitt said the public had weighed on what it wanted during the process, and she said she the new facility would bring the community together.

Members of the public also expressed support in moving forward with the ballot question.

Wendi Lauer said she thought the voters should weigh in.

“I think if we waffle on this too much, people are going to lose faith in the system,” she said.

Alan Goya said he probably would not use the pool because his children are older, but he wanted the other children in town to be able to use the pool before leaving to go to college.

A breakdown of the costs for the new aquatic center is available at www.bcnv.org/documentcenter/view/5297/aquatic-center-cost-breakdown_27m.

Also at Tuesday’s meeting, the council did the following:

*Approved, in a 4-1 vote, a resolution committing to secure and exhaust other funding sources to finance the new aquatic center before relying upon the tax base.

McManus did not vote for the resolution because he had problems with how the costs came forward: The architects came in at $21 million for the new pool, but, without their input, the city said it would be $37 million.

“I can’t support it,” he said about the resolution.