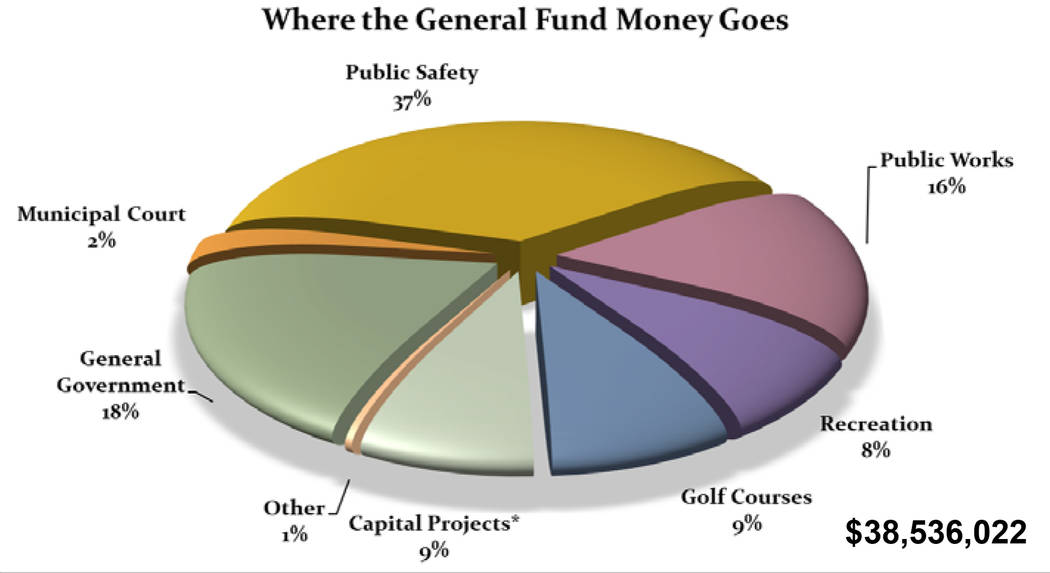 (Boulder City) The proposed 2021 fiscal year budget for the city is approximately $38.5 million, about $3.5 million more than the previous year.

Boulder City’s proposed budget for fiscal year 2021 is about $3.5 million more than last year because of several capital improvement projects tentatively scheduled for next year.

Staff recently presented the $38.5 million general fund budget to City Council along with the $37.7 million utility fund budget, which is approximately $4.8 million more than the previous year.

According to the city’s capital improvement plan, the $3.5 million in the 2021 budget is for a new irrigation system at Boulder City Golf Course, upgrades to See Spot Run Dog Park at Veterans’ Memorial Park, new equipment for the police and fire departments and several renovations to the Boulder Creek Golf Club.

The budget also includes a 3% contractual raise for staff members.

Police Chief Tim Shea is requesting that the part-time animal control officer position be made full time as well as boosting the total number of hours per week for the part-time kennel worker position to 32, making the worker eligible for the Public Employees Retirement System of Nevada.

Shea said with the animals at the shelter needing to be taken care of every day more staff hours are necessary. Prior to this employees had been volunteering after hours to care for them, he added.

According to Finance Director Diane Pelletier, the higher utility fund proposed for the 2021 fiscal year accounts for approximately $4.6 million of depreciation. Depreciation is the amount of revenue needed to be set aside in order to replace infrastructure that is worn out.

There will be numerous workshops for the proposed budget until its final adoption comes before council May 26. The next workshop will be led by staff for citizens; it is scheduled from 1-3:30 p.m. Monday, Feb. 24, at City Hall, 401 California Ave.

The tentative 2021 fiscal year budget can be found at http://www.bcnv.org/CivicAlerts.aspx?AID=152.