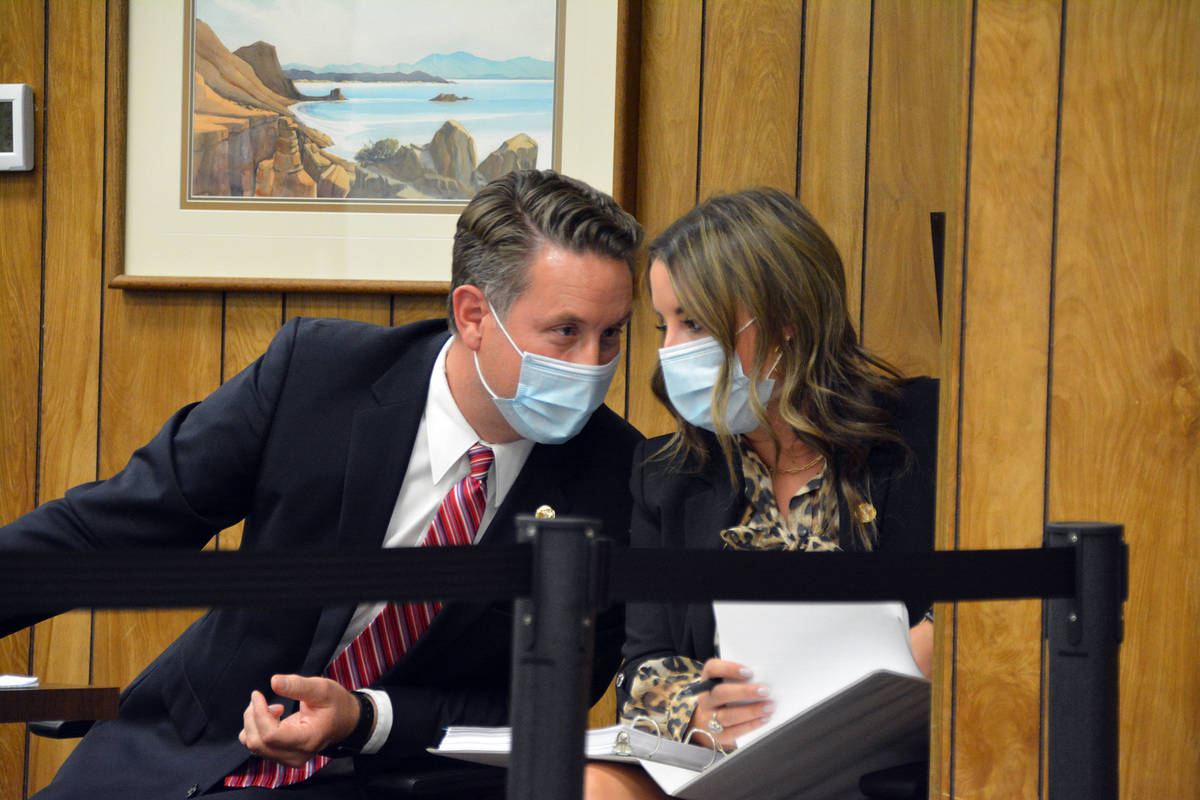 Celia Shortt Goodyear/Boulder City Review Former City Attorney Steve Morris confers with Lauren Oliver after his employment contract was terminated for cause at the Tuesday, Oct. 13, City Council meeting. Oliver is a lawyer who works in the city attorney's office as a paralegal. 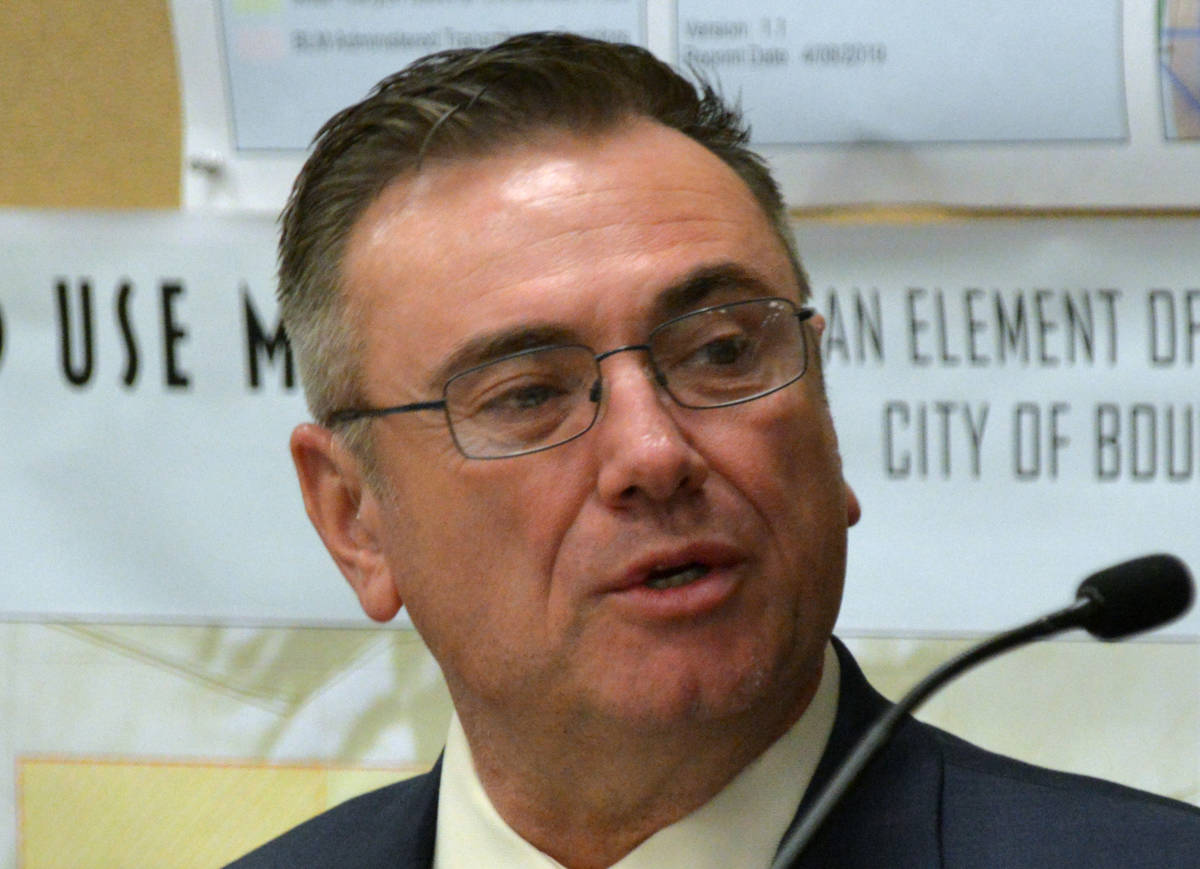 City Council terminated the employment contract with Al Noyola, who has served as city manager since March 2018, during its meeting Tuesday, Oct. 13.

Councilwoman Tracy Folda requested the items to discuss their contracts be put on the agenda.

Regarding the city manager, she said she wanted to address his “professional competence” in his “work duties.” She said she believed he had used his position in 2019 to deter a council member from placing an item on the agenda about his contract and had misused his emergency powers during the pandemic to implement fuel delivery, transport and storage standards at the Boulder City Municipal Airport.

Councilwoman Claudia Bridges said she had requested putting an item on the agenda about retaining outside counsel to review Morris’ and Noyola’s contracts after there had been questions about a previous agenda item being specific enough.

“I wrote a new agenda item and submitted it for appropriateness with Lou (Krumm) and Al (Noyola) … and then the city attorney,” said Bridges. “The city manager said I did not need an agenda item. All I had to do was ask our labor attorney and he would review the contracts.”

She said Noyola had always been professional and responsive in her dealings with him and she did not support terminating his contract.

Councilwoman Judy Hoskins said her experience with Noyola had caused her to question his professionalism. She also said his actions were “unacceptable” and she had concerns about his use of emergency powers at the airport.

“I would like to have him terminated,” she said.

“While there are certainly areas at which Mr. Noyola has shown his competence, his attitude toward this council has often been reluctant, antagonistic and even oppositional at times,” said Councilman James Howard Adams. “His approach, I believe, has interfered with the City Council’s ability to govern effectively and efficiently.”

Mayor Kiernan McManus said he believed it was in the best interest of the city to fire Noyola and said the city manager had failed to inform the council of “significant actions.”

He also said he did not have “confidence in him.”

Council terminated Noyola’s employment agreement for cause 4-1, with Bridges voting against it.

Noyola did not comment during discussion of this agenda item because he had recused himself due to a conflict of interest. He and Morris have an open lawsuit filed against the city in Nevada’s Eighth District Court.

During the meeting, Folda also said she had lost confidence in Morris as the city attorney.

She said she believed he had not kept the “council apprised of threatening open meeting reports against the city” and that she believed some of his advice had been “misleading and self-beneficial.”

Bridges said in her dealings with Morris he had always been a professional advocate of what was best for the city.

The other members disagreed and voted 4-1 to terminate Morris’ employment agreement “for cause.”

Before the vote, Morris addressed council and said the hearing was a “sham” and a “circus” with McManus and Folda as its ringmasters.

Morris said the meeting had proceeded despite neither he nor Noyola being given proper notice of the agenda items about their contracts. The notice provided was receipts for the purchase of certified mail for items sent to him and Noyola.

According to the receipts, notices were sent at 5:24 p.m. Sept. 14 from the Boulder City Post Office.

“After the close of the working day, this is a clear violation of Nevada’s open meeting law,” he said. “Bailey Kennedy, the council’s own attorneys, admitted that you can’t count the day in which the meeting occurs.

”Apparently Bailey Kennedy can count to 100,000, but they can’t count to 21,” he said, referring to the amount of money it anticipated being paid by the city for legal services.

Morris said he still believed these actions were being taken against him in retaliation for his testimony in an internal investigation of complaints filed against McManus.

“In City Hall, fear and retaliation have become a method of governance,” he said. “The citizens of Boulder City deserve much better.”

Council held items to appoint an acting city attorney and city manager until a special meeting at 1 p.m. Wednesday, Oct. 21. McManus said he would request that be scheduled.