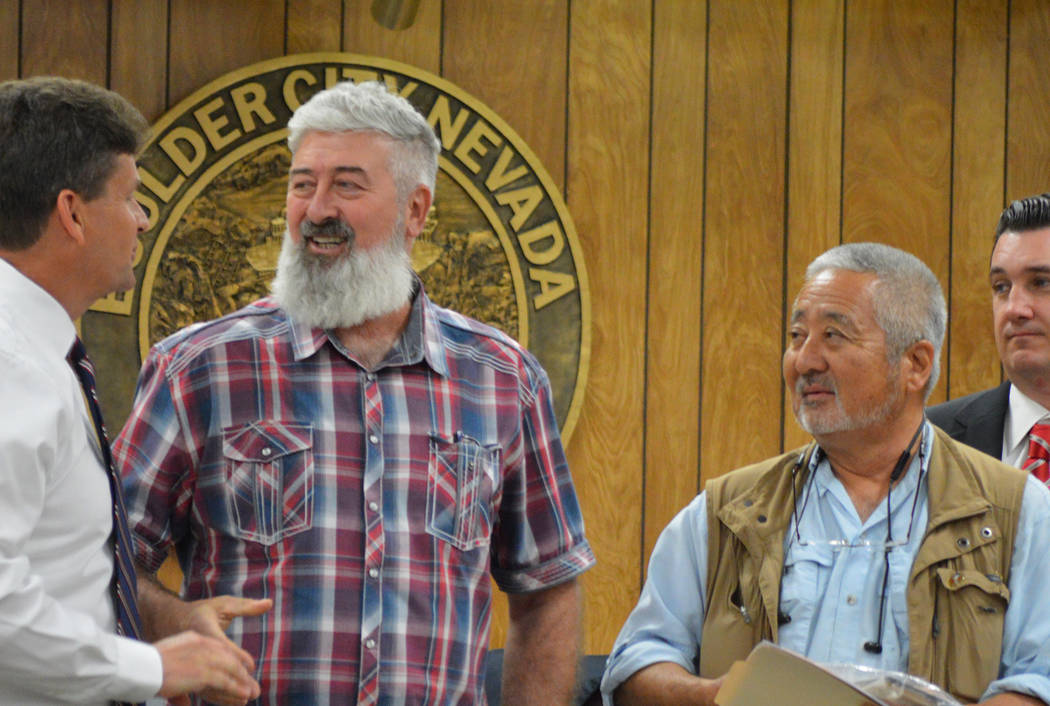 Boulder City residents will have an additional six months without higher utility rates after City Council unanimously approved a staff directive to defer an increase until January.

The deferral is for water and wasterwater/sewer rates; electric rates are not set to increase until July 1, 2020.

At its meeting Tuesday, April 23, council members discussed utility rates after Councilman Kiernan McManus requested that automatic 2.5 percent hikes be repealed. City staff did not agree with removing the increase.

The 2016-2017 budget included the rate increases to help cover the city’s increasing operating and capital costs. Before they were put into place, the last time the city raised utility rates was in 2009.

McManus said in the past two years revenues taken in from the utilities have exceeded expenses and he was concerned the automatic increases were being imposed without knowing what the revenues and expenses were each year.

“Right now they seem to be in good financial shape,” he said of the utility funds for water, sewer and electric.

In his request for the increases to be totally repealed, he asked that the city continue to move forward with its rate study planned for the next fiscal year as well as get input from the new utility advisory committee before making any decisions about utility rates.

If the new rates were repealed, staff would have to readjust the budget, according to City Manager Al Noyola.

Finance Director Diane Pelletier said in the short term this repeal would not be a problem, but with the unknowns in the upcoming rate studies it could hurt the community in the long run because the enterprise funds are supposed to make a profit in order to maintain them.

“As responsible public officials for the city, we cannot support this,” she said.

Councilman Warren Harhay said a 2.5 percent increase without any review was “boneheaded” because over 10 years the rates would grow by 25 total percent.

“Money should be raised as it is needed with some provision for emergencies,” he said.

He suggested the six-month deferral, which would allow utility advisory committee to meet and Utilities Director Dennis Porter to be more settled in his position.

Harhay also said the plan should be more “aggressive” and take into account the connection fees users have to pay every month.

Resident Glenn Feyen told the council he has to pay a little more than $86 for those fees every month, which are in addition to whatever water, sewer and electricity he uses.

Councilman Rich Shuman agreed the plan to repeal these increases needed to be more comprehensive.

“We need to replace what we repeal,” he said.

Shuman also said it didn’t seem fiscally responsible to repeal the increase as it was presented.

Councilwoman Peggy Leavitt said she thought the city was in a unique position because it has a new utility director and utility advisory committee.

“I think the residents’ comfort level with rate increases needs to be there … A year from now, we’ll have a lot more information and can make a much better decision about utility rates,” she said.

Mayor Rod Woodbury said the revenues being in excess of the expenses was expected because the city was trying to do more than cover operating costs.

“The rate increase was necessary because of a huge aging infrastructure need. … We’ve just barely started into that,” he said.

Additionally, he said replacing the infrastructure is a 10-15-year project and that’s why the revenues exceed the expenses in the early years to plan for those years of projects.

“You can’t just pay for this out of thin air,” he said. “You have to pay for them with something … The goal was to take care of our debt and build up infrastructure. Part of the reason we got into this place is because there weren’t (any) annual increases for awhile… To do anything other than defer these increases to the fall would be a knee-jerk reaction.”

McManus disagreed and said he did not think deferring the 2.5 percent increase was a knee-jerk reaction.

“This 2.5 percent is just a burden on the rate payers,” he said. “It’s not a surplus needed right now.”

He also suggested revenue from the city’s solar leases be used to help the utility funds and lessen costs for residents.

Porter said using that money for utilities is “unfamiliar territory” for him because enterprise funds should be self-sustaining.

“Not generating revenue now will have us to have to generate it down the road,” he added.

A formal resolution for the deferment will be voted on at a future Council meeting.