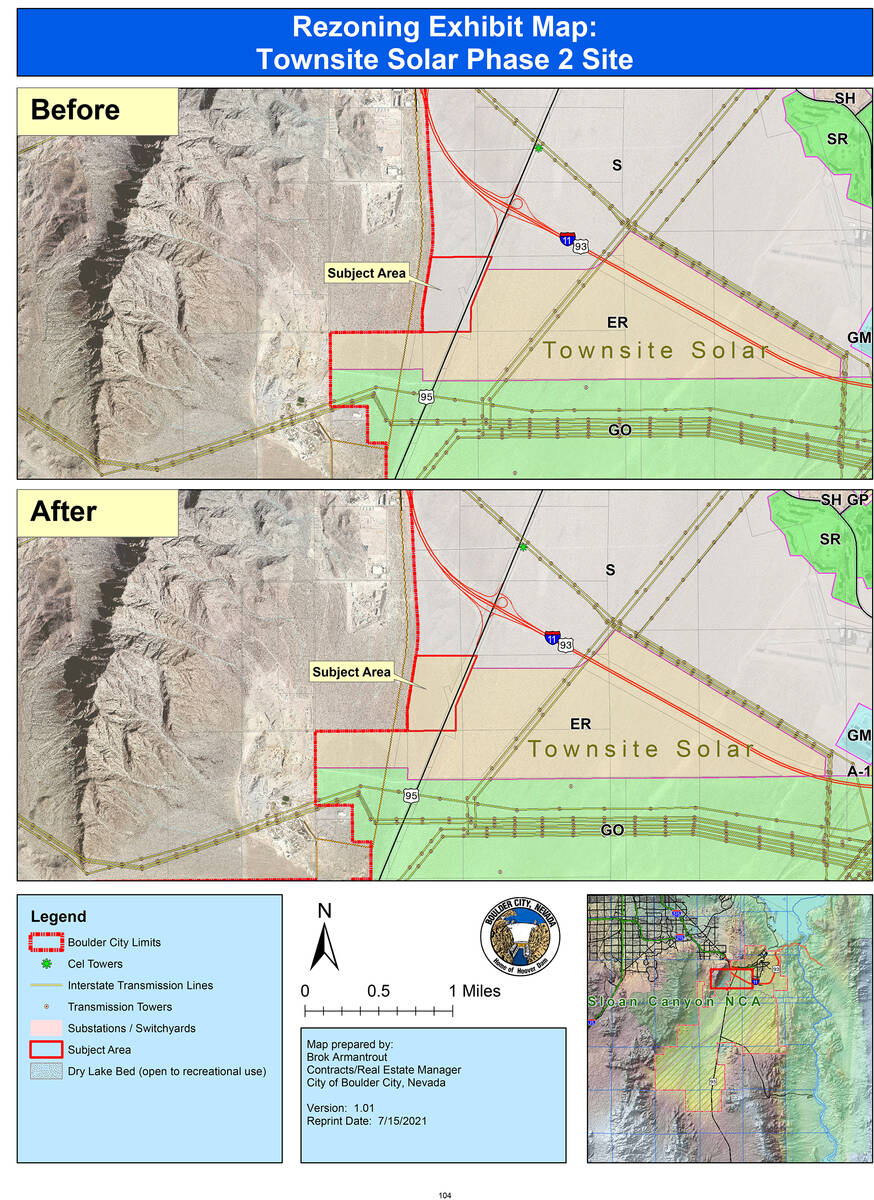 Boulder City At its Oct. 26 meeting, City Council will consider rezoning a 115-acre parcel of land near the interchange of Interstate 11 and U.S. Highway 95 to allow for more solar development.

At its Tuesday, Oct. 12, meeting, council introduced a bill that would amend the master plan and rezone that parcel of land from Study to Energy Resource. It is located west of U.S. Highway 95 and north and west of 1,033 acres of land already zoned for energy use and leased to Townsite Solar LLC for a solar development project.

In September, the Planning Commission, in a 2-5 vote, recommended the council deny the request.

According to Townsite Solar representative Linda Bullen, the company wants to maximize the available land.

“These projects … are not as profitable as they once were … this layout was the result of a lot of conversations with city staff and engineers and so forth,” she told the planners.

“I’ve had my fill of all the solar that we have here in Boulder City, and I’m not sure the money outweighs the preservation of open land,” said Planning Commissioner Nate Lasoff at the Sept. 15 meeting. “It seems to be a money grab from the solar companies at this point.”

Planning Commissioner Steve Rudd said he was “completely and totally opposed” to rezoning that parcel of land.

“I mean, this new Townsite (Solar 1 project) is atrocious, how you drive right through it. The dust that it makes, everything else, all that,” he said.

“I think it’s aesthetically pleasing,” he said. “I think Townsite turned out to be a good partner with the city. … I’m still worried about development at the intersection of I-11 and 95, and this is close to that area, so I’d be very happy to see more solar down there.

“The more solar we put out there the less chance of commercial development, so that’s why I’m in favor of it,” he added.

Paul Matuska, chairman of the Planning Commission, said he wanted to preserve that interchange area for “possible commercial development” if it ever were to come forward but he also said he thought the visual impact of solar was better than something commercial.

“I have always been an advocate for solar power,” he said. “My only concern with this particular item is simply … from my house, I can look out over the valley and see the cloud of dust that came during the construction of the existing Townsite. I was absolutely astounded that we didn’t have air quality issues.”

Planning Commissioner Ernest Biacsi said he also believed in solar power but he had an issue with amending the master plan piece by piece to allow for it.

Planning Commissioner Tom Marvin said he also supported the rezoning because it could be a “long-term buffer against the cost of living in Boulder City.”

Marvin and DiTeresa voted to recommend the rezoning, and the other commissioners voted against it.

Council will consider the bill at its Oct. 26 meeting.

Also at Tuesday’s meeting, council unanimously approved $3,865.60 be paid to City Manager Taylour Tedder to reimburse him for the moving costs he incurred.

Tedder originally asked for $3,476.83, but said he increased the amount when he found out that the reimbursement would have to be processed like a paycheck due to a 2018 change in tax law.

“After learning this information from the finance department, I respectfully request the council reimburse the moving expenses in the amount of $3,865.60, allowing for a net payment of $3,476.83 which fully reimburses the out-of-pocket moving expenses to date,” he wrote in a memo to the council members.