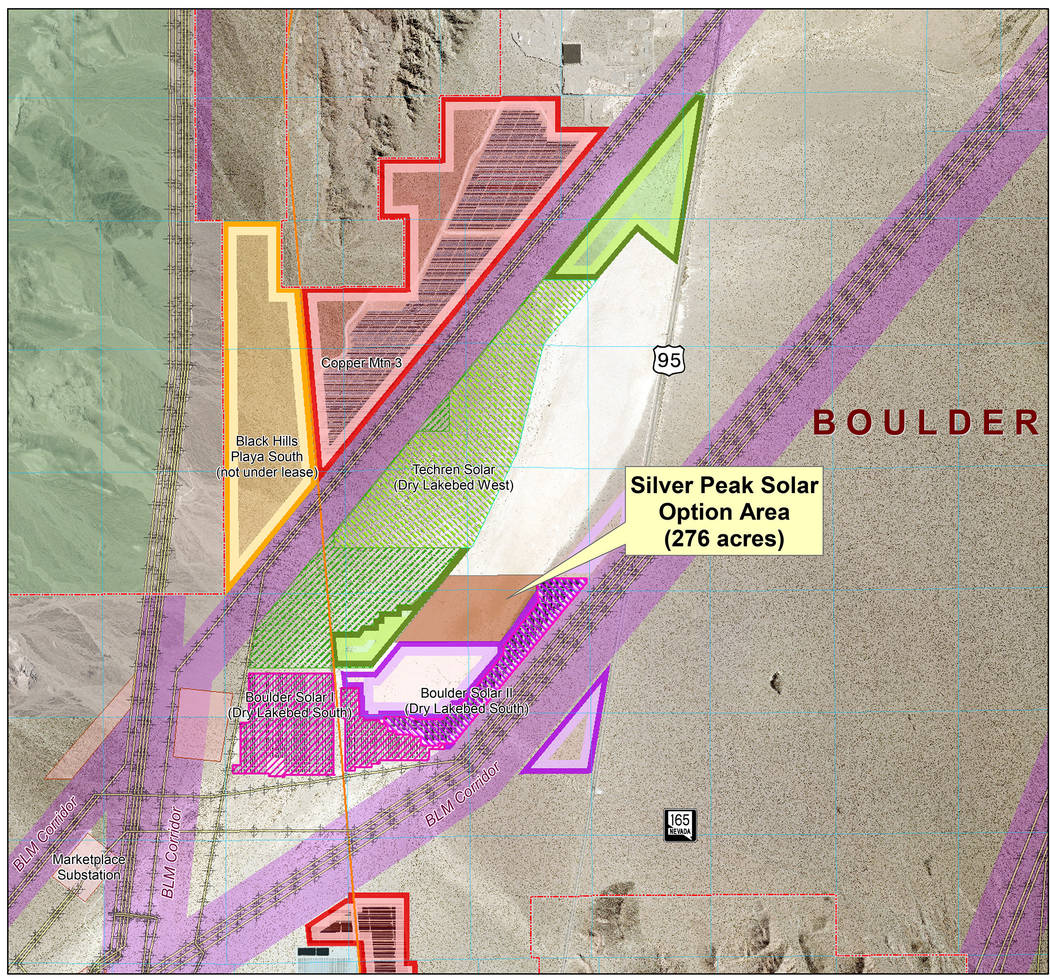 Concerns about preserving the dry lake bed were raised to City Council as it approved leasing more than 200 acres of it for solar development.

At its meeting Tuesday, council approved a lease option with Silver Peak Solar LLC to lease almost 276 acres in the Eldorado Valley.

The area was previously optioned by Korean Midland Power for a solar energy facility and then transferred to Sun Power. It was removed from Sun Power’s lease area due to site challenges and then Silver Peak, which is part of Techren, requested to develop the area. It has been in the land management plan since 2008.

“It’s been a pleasure to work with the city over many years to bring these solar projects to fruition,” said Larry Greene, project manager for all Techren and Boulder Solar projects.

On Tuesday, Contracts/Real Estate Manager Brok Armantrout said the option runs through 2022 with initial option payments starting at $65,000. If the option is exercised, Silver Peak will pay $1,000 per acre to lease the land, resulting in $9.9 million in city profits over the initial 30 years of the lease. There are also two 10-year options to extend the lease.

“It’s really not usable for recreation because of vegetation and topography,” said Councilman Warren Harhay.

Mayor Rod Woodbury also said the area was not usually used for recreation because it was hard to access as it was located too far south.

Despite these factors, some residents were still against leasing the land.

Kristina Kelley said the area was actually the best part of the dry lake bed to drive motorcycles in because the ground hasn’t been rutted by larger vehicles.

“The lake bed should stay for recreational use,” she said.

Ray Turner said he would like to see residents be better informed about issues of this nature.

“I don’t think it’s worth it. … I think if you give them an inch, they’ll take a mile,” said resident James Adams.

Kelli Carlson said the city should consider the dry lake bed like an asset and treat it like a national park by charging a day fee for its use.

Harhay said the area has been removed for recreation and in the land management plan for 10 years and concerns should have been raised before it was added to the plan.

“Now at the 11th hour and the 59th minute. … We hear a number of concerns from people,” he said. “If we were to turn this down at this particular moment, I personally think it would be inappropriate. … We’d be damaging a reputation and creating ill will.”

“We need to honor the agreements we made a long time ago and stick with this,” he said.

Councilman Kiernan McManus said he thought it was important to get information about these types of projects out to the community.

“I think we’re doing a disservice by telling the public they should have spoken up earlier,” he said.

Boulder City Mayor Rod Woodbury said it was clear they needed to do a better job of communicating but made a motion to approve the agreement because of how far along it was in the process.

This lease option is separate from Silver Peak’s request to add 667 acres of the dry lake bed in the Eldorado Valley to the land management plan for solar use. In November, the Planning Commission recommended that council deny the request, which will be discussed in the coming weeks.