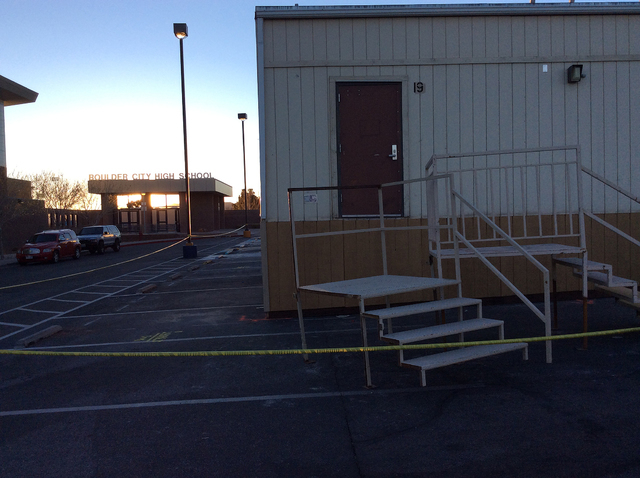 Funding for new classrooms at Boulder City High School could be in jeopardy if teachers and community members continue to show their disapproval, according to School Board Trustee Deanna Wright.

“If this becomes a perpetual issue, this (money) may go away,” Wright said.

In October, the Clark County School District gave $16.3 million to Boulder City High to build new classrooms as part two of the school’s four-phase replacement. However, the district failed to complete any new replacements of the high school after building a new gymnasium and library in 2004.

During a Community Education Advisory Board meeting Feb. 4 attended by teachers and parents, Wright and city Councilman Cam Walker discussed how the $16.3 million would be spent.

Walker said part of the $16.3 million budget will pay for overhead and other costs from the district’s construction division. Wright said whenever the district funds a new project, a portion of the budget is always allocated for construction costs.

Walker said the district’s construction division will take a “big chunk of money” from the budget, and $1 million will go to SH Architecture for its design and blueprint. Though he didn’t have an exact amount, Walker said the new total will be a “couple million less” than the $16.3 million the school was granted.

Walker said the district also wants to move forward with a portion of the third phase during phase two construction. That additional construction also will take more out of the budget.

But Walker also emphasized the importance of communication from all parties involved, including the school district. He said the district’s project manager has been on vacation for the past month, which has made communication much more difficult as groundbreaking inches closer.

“I’m no different than anybody else wanting to hold them (the district) accountable,” Walker said. “Let’s work together. Let’s be partners.”

Mark McGinty of SH Architecture said outside alterations to the new school can be made to give it a more historical feel, but all changes must be considered with the budget in mind. The school district still controls the size of the classrooms and, according to the district’s standard for design, the average size of a high school classroom in Clark County is 890 square feet.

She said if the school had gotten new classrooms during the original phase replacement in 2004, they would have been significantly smaller because of the way the district was building new schools at the time. During that time, high school classrooms were between 650 and 700 square feet, she said.

Although the new Boulder City High School will not cater to every teacher’s need, Wright said the plan is to keep some historical elements in place.

“This school is not going to look like Coronado or Liberty. It’s not going to look cookie cutter,” she said. “Because we’re doing a phase replacement, we have to build around what’s already there. We’re not just going to flatten everything. You’re not going to have some building that’s from some futuristic tomorrow sitting in the middle of Boulder City.”

Wright said the teachers’ complaints about saving the current school are not helping anybody because the school had already been deemed unsalvageable about 10 years ago.

“They knew that at some point the next phases were going to hit,” she said.

Wright added that not every Boulder City teacher is upset with the changes, but those complaining need to realize that no other teacher in the district gets any input when a new school is built.

“We’re doing our best. What frustrates me is that they (the teachers) continue to say they’re not being treated equitably. They want to be treated special. They can’t have it both ways,” Wright said. “This community has had more input than any other school in (Las) Vegas. Nobody else gets input.”

Portables are already being moved to Boulder City High School in preparation for the groundbreaking, which is expected to start when the school year ends. Wright said the funding could be taken away if the teachers’ complaints mount to anything serious.

“I don’t understand why this staff feels like they should have, and get more, than (other) staff that teaches in the same district,” she said. “The only thing that could change was that if there was a big enough uproar, we could pull the funding and give it to someone else.”