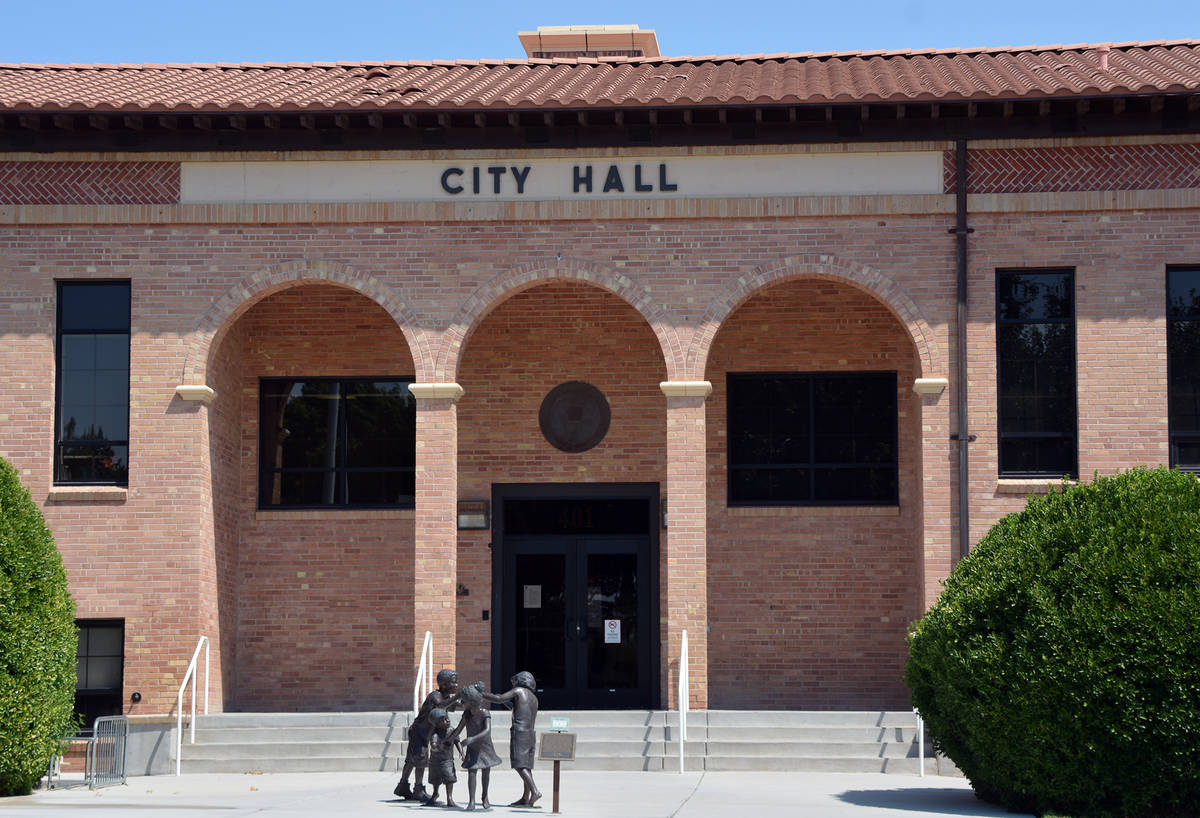 Celia Shortt Goodyear/Boulder City Review Counsel for City Attorney Steve Morris and City Manager Al Noyola filed a new motion that includes testimony from a sitting council member claiming that a plan to terminate their employment contracts and deny their severance pay may have begun more than a year ago.

A plan to terminate the employment contracts of the city attorney and city manager and deny them their severance pay may have begun more than a year ago, according to a new motion filed in a District Court case against the city.

On Monday, counsel for City Attorney Steve Morris and City Manager Al Noyola filed a motion for an injunction to prohibit Mayor Kiernan McManus and Councilwoman Tracy Folda “from acting in any official capacity upon any matter relating to Plaintiffs’ employment contracts with the city, pending the outcome of this case.”

A hearing for this motion is scheduled for 9 a.m. today, Sept 3.

McManus had called for a special council meeting to be held Aug. 6. At the meeting, Folda was requesting to discuss terminating the employment contracts for Noyola and Morris as well as appointing their replacements. That meeting was canceled after a temporary restraining order was issued by Jim Crockett, a judge in Nevada’s Eighth District Court.

In hers, Bridges claims that a plan to fire Noyola and Morris from the Boulder City Community Alliance started surfacing during the 2019 campaign. She wrote that she was interviewed in January 2019 by the alliance “to run for an open City Council position.”

The alliance, which was co-founded by Folda, is a closed Facebook group committed to ensuring that Boulder City stays a “healthy, spacious, clean, well-balanced, carefully-controlled community” by preserving “its small town historic atmosphere and character and avoidance of uncontrolled and rapid growth.”

It endorsed Bridges during the campaign as well as McManus and Councilman James Howard Adams.

In her declaration, Bridges wrote the group had concerns with Morris’ and Noyola’s contracts because “they made too much money and their hiring process was questionable.” Additionally, she said the group had expressed concerns that Morris’ faith and position in the Church of Jesus Christ of Latter-day Saints would give him “sway” over city personnel and the prior mayor.

Bridges wrote it was her understanding that whatever would be done with the contracts would be in accordance with state laws. She also said Folda was “very involved in the election process.”

When McManus was elected mayor in June 2019, it left a vacancy on the council. Bridges then met with Folda and alliance fellow co-founder Laura Pyzer “to discuss a proper appointee to replace” McManus.

“During that meeting, it was determined that Ms. Folda would be the nominee,’’ she wrote.

Bridges said shortly after, “it became clear that McManus and Folda’s intent to terminate” the employment contracts of Morris and Noyola “had morphed from a legal process of removal to an intentional effort to undermine” their “contractual expectations,” specifically, eviscerating their “contractual right to severance through a concocted plan of ‘for cause’ termination.”

Sommer, who just completed 10 years working as the executive secretary to the city manager, corroborated that idea in her declaration.

“I believe, and have witnessed incidents that lead me to believe, Mayor McManus and other Council members are engaged in a smear campaign to ruin the reputations of Mr. Noyola and Mr. Morris,” she wrote. “Additionally, the focus appears to be on trying to tarnish their names and find cause to end their contracts without paying contractually-required severance.”

She also wrote that McManus had tried to “force” the Aug. 6 special meeting to be held even though a temporary restraining order had been issued to prevent discussion of the contracts, character and alleged misconduct of Morris and Noyola.

Krumm supported that claim in her declaration.

“On August 6, 2020, and in complete disregard for the TRO … McManus … instructed me to have personnel available for the special meeting, as the special meeting would proceed as scheduled even with no business items on the agenda.”

Krumm said that email was copied to all City Council members and Noyola.

In their complaint, Morris and Noyola claim that the Aug. 6 meeting to discuss their possible firings was in retaliation for their testimony in an internal investigation about complaints filed against the mayor.

According to the Aug. 31 motion, there were 10 complaints filed against McManus, who was accused by various city employees of “religious discrimination, harassment, bullying and creating a hostile work environment.”

Morris and Noyola substantiated some of those claims during their interviews as well as disclosing they had also been victims of the mayor’s alleged behavior.

She wrote, “City Hall has become a hostile work environment” due to the atmosphere created by McManus and certain council members and that she feels “anxious, stressed and unsure” of her safety at work even though she has not been a target of this behavior. She said she is retiring Oct. 1 because of stress even though it is earlier than she had originally planned.

Bridges said she also filed complaints against McManus and had been harassed by alliance members and Folda after she voted against an agenda item to hire outside counsel to discuss Morris’ and Noyola’s employment contracts.

“One BCCA member was so upset with my vote that she asked, in a loud voice, what I was going to do to ‘fix it,’” she wrote in her declaration.

She also said that after the Aug. 11 council meeting, “Folda began discussing with me my resignation and how everyone would understand if I needed to resign, essentially telling me I was not wanted on the City Council anymore.”

The new motion includes a declaration from Noyola stating he confirmed the complaints against McManus and also made allegations about Adams and Folda.

At today’s hearing, Crockett will also decide on whether to extend the current temporary restraining order. He approved the request made by the law firm representing the city to move it to today from Sept. 17.