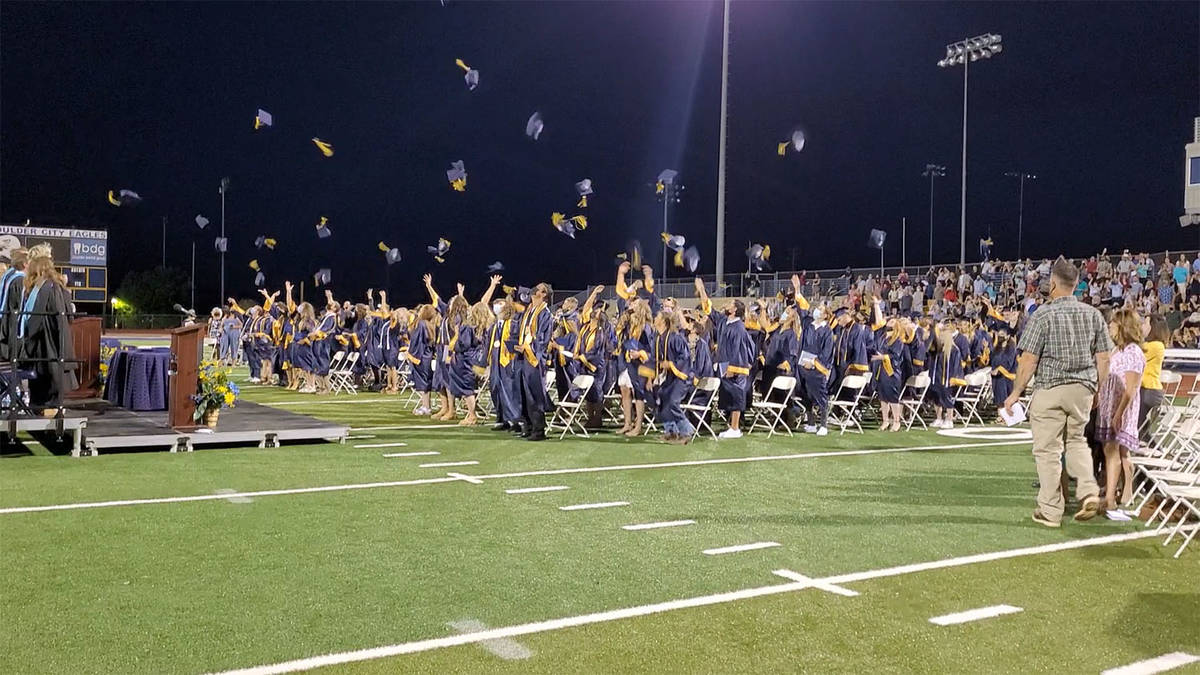 Celia Shortt Goodyear/Boulder City Review Members of Boulder City High School's class of 2021 threw their caps in the air at the end of the commencement ceremony May 27 at Bruce Eaton Field.

After a year filled with the abnormal, Boulder City High School’s class of 2021 celebrated their graduation in a normal way: on the football field with their friends and classmates.

“It’s amazing,” said Rebecca Leavitt, whose daughter, Rory Leavitt, graduated. “I’m extremely happy that she got a graduation, that they all did. We just feel so blessed that they were able to have a ceremony. We didn’t think she would.”

The 80th annual commencement ceremony took place May 27 at Bruce Eaton Field, and all the graduates were able to be there at once. In 2020, the school held numerous small ceremonies in the school’s theater to comply with occupancy requirements due to COVID-19.

“I’m very glad that they get to do it in person,” said Victor Miller.

His son, John Miller, was one of the 2021 salutatorians.

“It’s been 50 years since I graduated on this field. … After last year … it’s great they were able to have this experience, especially with them missing out on so much,” he said.

“I’m super proud of her … even with it not being the traditional (high school) experience,” said Kat Wilson about her daughter Jalen Wilson. “It’s a big deal.”

During the ceremony, the valedictorian and salutatorians gave speeches and talked about the difficulties and joy of the past school year.

Fellow salutatorians Julian Balmer and John Miller did a joint speech and encouraged their classmates to persevere and thanked them for their friendships.

“Friends make you laugh and help you get through life,” said Balmer.

“We are proud to be friends with so many of you and out here with you tonight,” added John Miller.

Valedictorian Jamison Kaboli thanked everyone at the ceremony, including his family. He also praised his classmates for their perseverance and encouraged them to take part in the opportunities they would have coming in their lives.

BCHS Principal Amy Wagner encouraged the class of 2021 to be better than they were the day before.

“So, the class of 2021 — go out there and be amazing,” she said. “Be brave. Be kind. Be inspiring. Be unstoppable. Be Boulder! In essence, be the very best you can be each and every day while creating your own masterpiece, one that you are proud of, and, if not, know that tomorrow you can give it another shot with everything you have.”

Despite being on the football field, the commencement ceremony was a little different than in years past. The band did not play, fewer spectators were allowed in the stands and the graduates threw their hats from their seats rather than in the middle of the field.