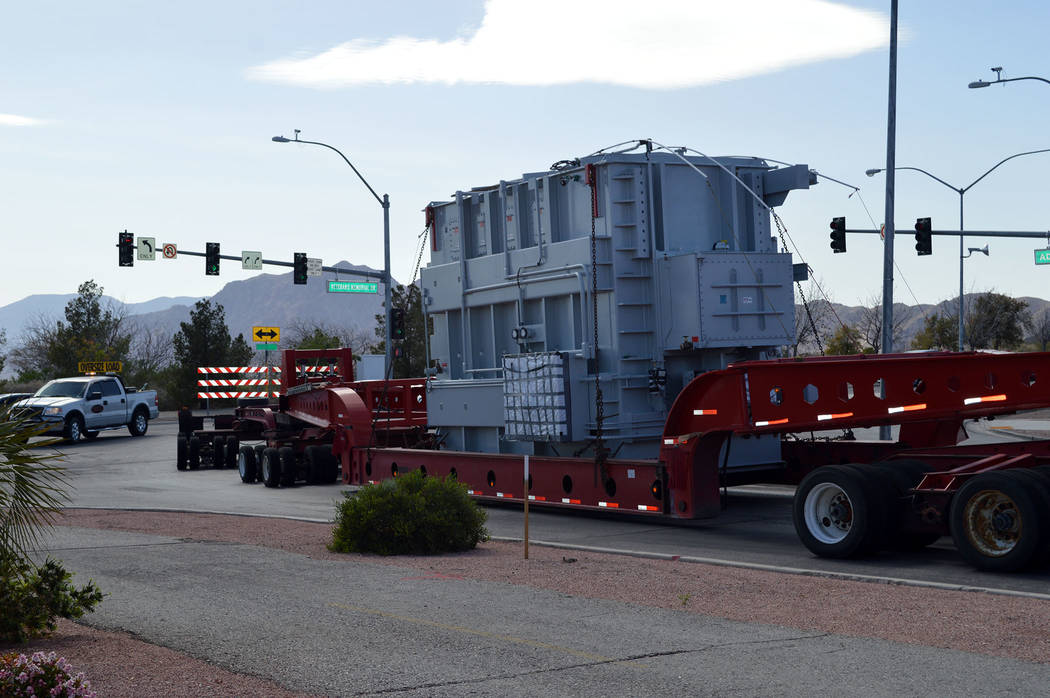 Installation of Boulder City’s new backup transformer is scheduled to begin the week of Nov. 11 and be completed in March.

Upgrades to Boulder City’s electrical system have begun as installation of the new backup power supply is scheduled to start next week and new power transmission lines are being put in.

A new transformer will back up the city’s power supply and will increase the reliability of the entire system, according to city officials.

“The Boulder City tap substation is the backup power supply for the city,” said City Engineer Jim Keane in an emailed statement. “The old transformer is 57-plus years old and undersized to supply the whole city with power in the … high use summer months. The new equipment is sized to supply power for the whole city. Once energized, the new equipment will be in standby mode until needed in an emergency.”

Keane said the contractor, ESS Corporation, is responsible for removing the old transformer and breaker; installing steel structures for new support cables; installing the new breaker, cables and associated equipment; hooking it up to the system; and making sure it works.

The transformer cost $1.1 million and weighs approximately 109 tons. Installation is scheduled to start the week of Nov. 11 and be completed in March.

It was originally supposed to be operational by November 2018, but a leak was discovered in July that delayed the project’s start. The city then chose to delay the process to get through the hot summer months so it would not be left without any backup to its power-supplying system during that time.

Another improvement to the city’s electrical system is the installation of new power transmission lines along the northeastern end of Nevada Way to connect Substation 3 near Adams Boulevard and River Mountain Avenue with Substation 6. These lines and this connection will help create a backup power system for that part of town.

The above-ground line will be 2.07 miles long and will be installed on steel electric poles. They will be approximately 300 feet apart and range from 60 to 80 feet high.

“The contractor has performed surveying work to establish the alignment for the new power line. … The work also includes the connection of the new power lines at each substation and transferring the existing distribution lines that run along Boulder City Parkway from Nevada Way to Substation No. 6 to the new pole line and removing the old pole line,” Keane said.

There will be no long-term road closures during the project.

“No roads will be closed during construction except when they are hanging new cables across a runway,” he said. “These will be temporary/short closures just to keep the cable across the road from pole to pole.”

The new line is expected to be completed in March and is being installed by PAR Electrical Contractors Inc.