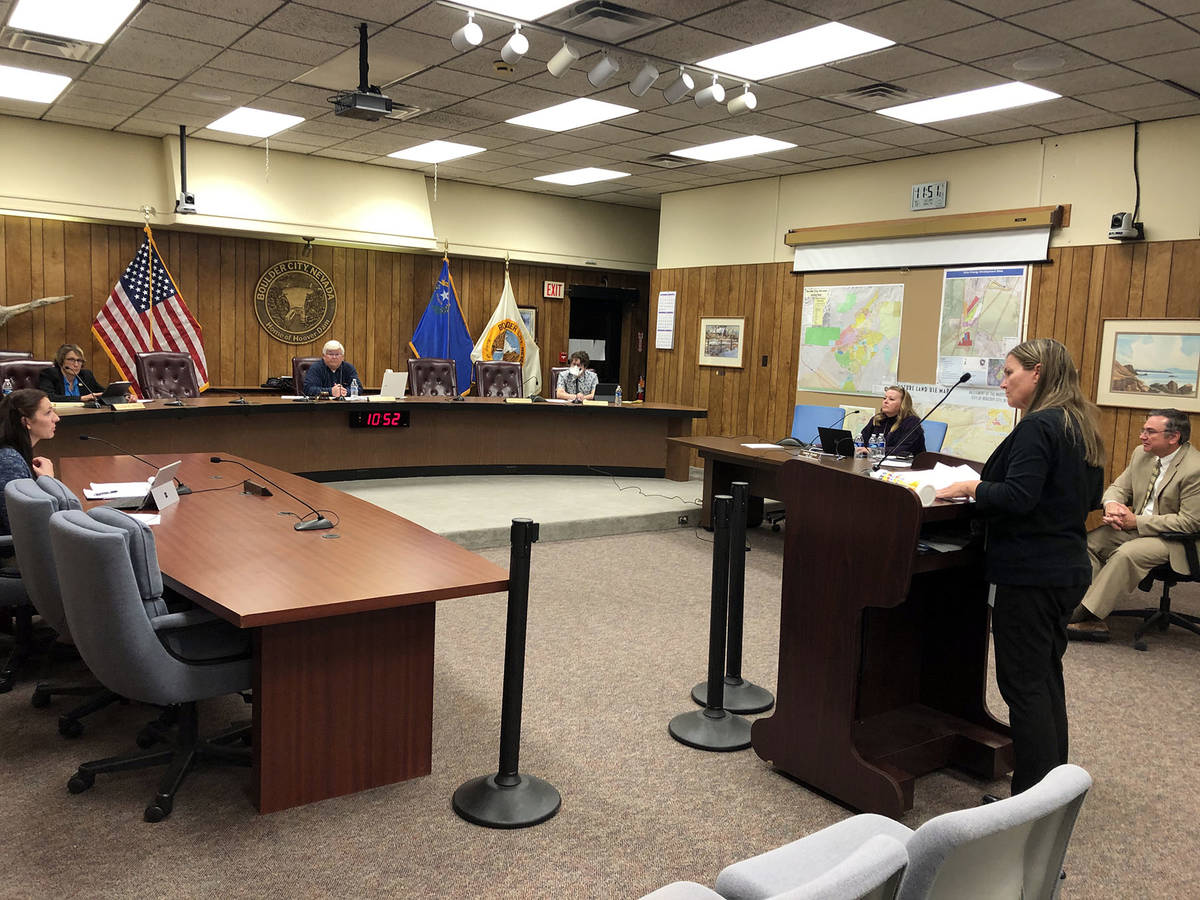 (Boulder City) Council members and staff observed safe social distancing practices for Tuesday’s, April 14, City Council meeting. Staff members waited in their offices at City Hall and were called in one at a time for their presentations. Residents were able to watch the meeting online and submit comments and questions through an online form or in advance.

City Council failed to ratify new aviation fuel standards for the Boulder City Municipal Airport and ignored the city attorney’s advice at its first meeting since entering a state of emergency March 15.

According to the April 14 agenda, the standards were adopted March 25 by City Manager Al Noyola. During a declared emergency, Noyola may perform and exercise necessary functions, powers and duties to secure and protect the public in accordance with city ordinance 1609.

Noyola said he had the city attorney, airport manager and fire chief telling him they were concerned about public safety because of new equipment at the airport and he believed the situation “rose to that level of seriousness.”

The new guidelines set a 4,000-gallon limit for any certified refueling vehicles, provide training and certification requirements for people handling fuel at the airport and better explain industry standards.

Airport Manager Willy Williamson said work on the new standards had started before he came to the city in October. He also said it was ready to be presented in February.

He said when he started his job at the airport, he was concerned about the number of fuel trucks there.

“It just looked dangerous to my professional eye,” he added.

City Attorney Steve Morris told council members they could discuss the standards and change them if they wanted to, but he recommended that they not discuss whether Noyola’s use of emergency power was warranted.

“My opinion is to stay clear of the OML (open meeting law). … The item that is before the council is the ratification of those standards adopted by the city manager. … Whether it was a proper use of emergency powers needs to be agendized,” he said.

Mayor Kiernan McManus disagreed and said he was “absolutely not in agreement with how” the fuel standards were approved and said he thought it was an “abuse” of emergency powers.

He asked Williamson if the process to create them had included anything about the pandemic, social distancing or any other health concerns with COVID-19.

Williamson said initially it did not.

Noyola said he felt that enacting these new standards fell under ordinance 1609 and that McManus was “questioning his integrity” as city manager.

City ordinance 1609 was approved by council Oct. 14, 2018. During a state of emergency, it allows the city manager, if circumstances prohibit the timely action of the City Council, to perform and exercise functions, powers and duties that are necessary to promote and secure the safety and protection of the civilian population.

Councilwoman Judy Hoskins, who attended the meeting by video conference, also said she thought the situation was not an emergency under COVID-19 because the problem had been there since 2019.

After approximately two hours of discussion, Councilman James Howard Adams made a motion to adopt the standards but to remove any language about the state of emergency and the city manager’s actions. Councilwoman Claudia Bridges seconded it.

The motion failed 3-2 with Adams and Bridges voting for it and McManus, Hoskins and Councilwoman Tracy Folda voting against it.

A new resolution will be presented to council in the near future.

The city is involved in a court case with fixed-base operator BFE LLC about using certain refueling equipment at the airport. BFE filed a complaint Nov. 12 to allow use of its two 10,000-gallon mobile refueling trailers.

A minute order was filed by Judge Timothy Williams on Wednesday, April 15, which said that once the City Council changes the controlling laws of the airport, all parties are required to abide by them.