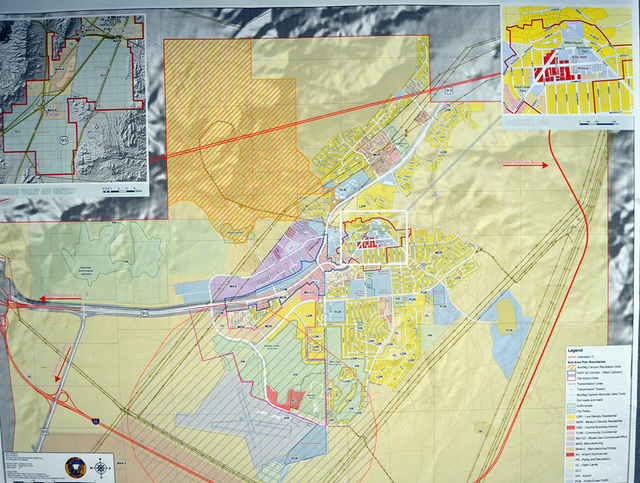 Max Lancaster/ Boulder City Review This map shows the city’s most up-to-date master plan, which was last amended Oct. 25. The current master plan has been amended multiple times but has not been re-evaluated since 2003.

A debate has begun in Boulder City over the idea of growth and how much is too much for this small town.

As residents have expressed more interest in land sales and how government manages them, the city has put two key documents into the public eye: the land management plan, which designates potential uses for parcels of land, and, more importantly, the master plan, which zones, designates and requires areas of city land for specific uses.

The Boulder City Master Plan is not a new document. In fact, the plan in its current state has not been re-evaluated since 2003 and the city has been required to have one since 1964, according to state law.

When the city re-evaluated the plan in 2003 it was to create a better map for how new plots of land should be zoned, such as the 1,000 acres in the Eldorado Valley that was purchased from the Colorado River Commission in 1995. Also, with the growth of Las Vegas and Henderson at the time, it was an important step to understanding where the city hoped to be in 20 years.

According to Brok Armantrout, director of community development, the city has not kept up with re-evaluating its master plan like Las Vegas and Henderson.

“The master plan is a 20-year plan for the direction of the city,” Armantrout said. “Most larger cities re-evaluate every five years and readopted every 10. We have done neither in 13 years.”

He said state law only requires that the city have a master plan, and not how often it should be re-evaluated. The fact that officials do not take a long look at the master plan every five years is OK, but that does not mean that the city shouldn’t look at it now.

“We are a small city with a growth ordinance so we don’t need to constantly change the master plan, but I think now would be a good time to re-evaluate.”

In fact, City Council and staff members have expressed support for a discussion of the master plan.

“A city’s master plan should be reviewed and updated periodically,” Boulder City Manager David Fraser wrote in an email. “While there is no hard or fast rule about how or when this should occur I think it is fair to say that the city of Boulder City is nearing the appropriate time for such a review.”

Councilman Cam Walker said a look at the master plan is necessary because the city is dealing with new realities that seemed distant in 2003.

“In 2003 we thought the bypass was 30 years away and they wouldn’t be able to get the money to fund it,” Walker said referring to the Interstate 11 bypass. “This is a drastic change to our city that is coming soon and we need to create a new plan that decides where we are going to be in 20 years.”

Boulder City Mayor Rod Woodbury said that supports re-evaluating the master plan but is hesitant about the process of rewriting the entire thing.

“I am supportive of re-evaluating the master plan like Brok and his staff plan on doing next year since we do that periodically,” Woodbury said. “I don’t think we are ready for a full blown master plan rewrite. … Boulder City has just not grown much in terms of development since the plan was adopted in 2003.”

Unlike the land management plan, which can only propose potential uses for a parcel, the master plan designates a specific use for each piece of land, requiring developers to use that land for that purpose unless the City Council votes to amend the master plan.

“A master plan designates land use,” Walker said. “If someone wanted to build a bunch of homes in a manufacturing area, they could not do that without having the council change the designation.”

Every parcel of land in Boulder City has a designation, such as multihome residential like the area by Boulder Creek golf course or outdoor recreation like Bootleg Canyon Trail. New buildings or businesses created by a private contractor or the city have to follow the master plan designations.

Another designation, open land, refers to public areas mostly used for conservation outside of the urban parts of the city. The majority of the Eldorado Valley is open land, with the exception of the manufacturing energy designation on the parcels leased to solar companies.

While building in a certain areas has to correspond with the master plan designation, the plan can be amended to change a particular designation.

“It take around 45 to 60 days to amend the master plan,” Armantrout said. “After a request is made the amendment goes to the Planning Commission where they make recommendations to see if the new designation is viable. After that it goes to the City Council where they vote on the proposed amendment.”

Only council votes can amend the master plan.

For example, council members voted to amend the master plan Oct. 26 when developer Randy Schams requested that the Boulder City Mobile Home Park be redesignated as a multihome residential in order to build townhomes. This designation was counter to the city’s original plan, which was for a commercial space.

“We had designated the area as commercial and I still think that is the best use for the mobile home park (property),” Armantrout said. “But when he didn’t want to do that his request went to the Planning Commission and the City Council and the master plan was amended.”

Schams had said he was open to commercial uses but that it wasn’t a viable option for that parcel.

A plan and an ordinance

The master plan cannot trump the city’s low-growth ordinance. While the master plan designates land use, it still is subject to the regulations of Boulder City’s growth-control laws.

The ordinance limits the number of homes that can be built in the city to 120 per year.

Hypothetically, if the city wanted to amend the zoning designation for 90 percent of the open land to residential, it would still be limited to building only 120 homes each year on the property.

Before the city can make any major changes to the master plan it must first set up a number of public workshops to get feedback from residents.

Councilman Walker said he wanted to begin the process now so the public can get involved in the discussion.

“Let’s start the re-evaluation process now,” Walker said. “It is important to have some public meetings and get the public involved so they can tell us what they want as the city moves forward.”

Woodbury expressed the same sentiment, stating that the city would need to do a lot of soul searching to figure out where it wants to be in the future.

“The city needs to go through some serious soul searching and discussion about where we want to be in 10 to 20 years,” Woodbury said. “If you don’t first know where you want to be, then you can’t write a plan to get there. That is the discussion I am hoping to have in regards to the master plan and the land management plan, and I think it will take a lot of planning to get there.”

No public workshop has currently been set up regarding the master plan since the city has not formally begun the re-evaluation process; however, the city’s community development department plans to initiate the process sometime next year.