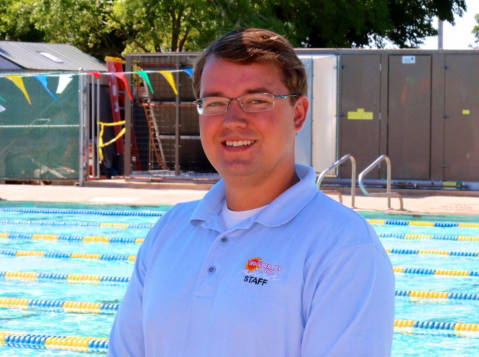 Thirty seconds. In just 30 seconds Jacob Andersen went from thinking firecrackers were going off to realizing he was one of the more than 500 people who had been injured Sunday at the Route 91 Harvest country music festival in Las Vegas.

“When I realized what was going on, it was about the same time time I realized I had been shot,” said Andersen, Boulder City’s aquatic coordinator. “It was like being stabbed with a burning knife.”

Instinctively, he put his left hand over the wound on his right forearm and began putting pressure on it, all while dropping to the ground to “make myself small.”

“In between barrages, I tried to make my way to the back to get help.”

Andersen, who was 45-50 yards away from the stage on the side closest to the Mandalay Bay when the shooting began, was also looking for his fiancee and her parents, who were at the festival with him.

As Stephen Paddock opened fire on the crowd, they hurriedly left the venue and headed home. Andersen was with his future brother-in-law, but they were separated in the “chaos.”

“No one else in our group was injured,” he said. “They got out pretty much unscathed, just bruised.”

Once he realized they were not there, Andersen said, he made his way to the medical tent, where someone put a bandage and a tourniquet on his arm.

“They were so inundated with injuries more horrendous than mine.”

Andersen said those working with the injured asked anyone who could walk to leave the tent so that those with more serious injuries, such as those who were shot in the abdomen, could be treated.

“I saw a lot of things I never hoped to see,” he said.

Andersen, a country music fan who was attending his fourth Route 91 Harvest festival, described the situation at the concert venue as chaotic.

“No one knew what was going on, and there was a false report of another shooter.”

Eventually, he was taken to the Hooters Hotel, where he was reunited with his future brother-in-law. They were able to call another brother and sister-in-law, who got them and took Andersen to Spring Valley Hospital Medical Center.

Andersen said so far all doctors have given him a good prognosis for a full recovery. He said the bullet did not break any bones.

“Unfortunately, it’s the hand I write with,” he said. “It’s my dominant hand, and I can’t write or text on the phone.”

He expects to be out of work for about one week.

Despite being shot, he remains in fairly good spirits, surrounded by his fiancee and her parents.

“It’s nice to have them around to talk about things and keep my mind off certain aspects,” he said.

He said he is extremely grateful to all the medical personnel and Metropolitan Police Department officers for their service.

“They were beyond exceptional. They handled an unbearable situation very professionally.”

He also commended the good Samaritans who dropped everything to help the injured.

“The amount of courage and compassion they all showed to put others first was really great to see.”