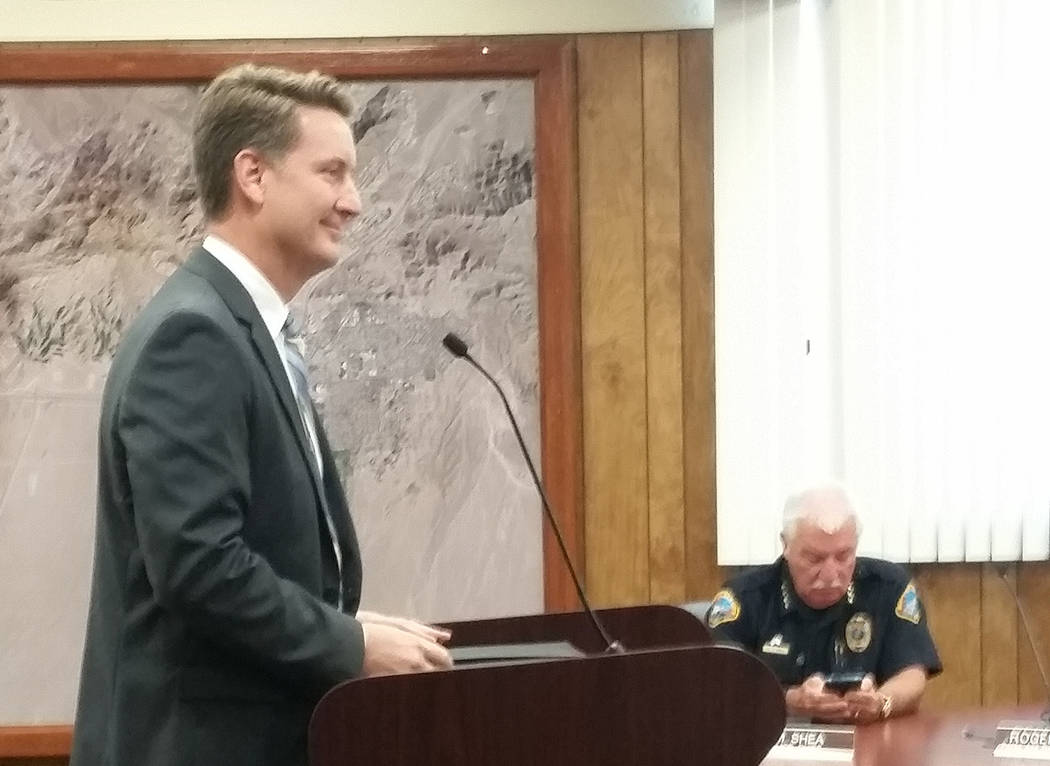 File City Council has been found in violation of the open meeting law for not providing resumes to the public as part of its supporting materials when interviewing four candidates for the city attorney position on Sept. 20, including Steve Morris, who was ultimately selected.

In his opinion released Friday, Laxalt said the city failed to provide supporting material regarding the backgrounds of the four candidates for the position.

Resumes and interview questions for the candidates were to be available at the beginning of the council’s Sept. 20 meeting, according to the agenda packet. They were not, nor were they provided when requested by several people.

“We asked for the stuff, and the people at City Hall said they didn’t have it, and they should have,” said Adele Sherwood, one of the residents who filed a complaint.

Sherwood added that elected officials should serve the people who voted for them.

“I just think the people that we elect should be doing their job and be for the people. … If they just do what they want to do and are not working for us, that’s not fair.”

“I felt that it was a bona fide complaint that the attorney general needed to decide on, and Boulder City needed to be held accountable to the open meeting law,” said Linda Barnett, who also filed a complaint. “We need to hold a high standard of how we do business in Boulder City.”

Laxalt’s written opinion said that about 30 minutes before the meeting, resident Neal Siniakin met with City Clerk Lorenne Krumm and asked for copies of the resumes. At that time, Krumm said she did not have them and would provide them to him when she received them.

He and other residents also asked for the resumes right before the meeting and during the public comment periods.

Laxalt said that before the meeting Sept. 20, council members were given binders featuring supporting materials that included interview questions and resumes for the city attorney candidates and that during the meeting, Mayor Rod Woodbury explained the city attorney selection process, stating that council members had the “applications, resumes and writing samples” for them.

Nevada law requires public bodies to make a copy of those supporting materials available to the public at the same time they are provided to council members.

Additionally, Laxalt said the council was not excused from providing the supporting materials to the public even if they were provided privately to the council, even though outside of Siniakin’s request, none were “direct requests,” as the council had asserted, and were necessary for council members to “competently conduct candidate interviews.”

By not providing the resumes to public, Laxalt said, the council violated the open meeting law.

The finding will be placed on the council’s next agenda to formally acknowledge the violation, and Laxalt’s written opinion will be included as supporting material in the agenda packet.

The resumes were available for the council’s next meeting, Sept. 26, when members, in a divided vote, selected acting City Attorney Steve Morris for the permanent position. Though complaints were also filed about that session, Laxalt said the council did not violate the open meeting law then.

“The city is pleased with the conclusion of the attorney general’s office that no open meeting violations occurred in connection with the council’s Sept. 26, 2017, meeting, city spokeswoman Sue Manteris said in a statement on behalf of the city. “In the matter of the attorney general’s office finding that council did violate open meeting laws by failing to provide resumes for its Sept. 20, 2017, meeting, city staff has taken corrective measures to ensure proper communications between departments regarding any support material provided to council are provided and/or available to the public upon request.”

In his opinion, Laxalt added that the council and the city clerk’s office treated residents’ request for the resumes as a public records request rather than a supporting materials request.

Despite state law allowing a public body to take five business days to issue its response to a public records request, that does not negate the open meeting law’s requirement to make supporting materials available to the public when they are given to the council members, Laxalt wrote.

In another statement, Manteris said the resume request was treated that way because it was made to the city clerk’s office, which did not have the resumes. They were supplied to the council by the human resources department.

Manteris also said there was some miscommunication before the meeting between human resources and the clerk’s office. Usually the department overseeing an agenda item is responsible for providing backup material to the council and the public.

Woodbury said with hundreds of pages included in agenda packets, “there’s always a chance for clerical errors or procedural mistakes to be made. Staff does its best to minimize mistakes like those. I don’t know why the attorney general is imputing the failure to include the missing resume to the City Council, since that’s not really our job.”

Ultimately, he said, the “buck stops here with us” and they will “do our best to comply with the moving target of our ever-expanding open meeting law requirements. And we’ll try to implement measures to ensure that omissions like this don’t happen again in the future. If the attorney general wants to tell the City Council to do the city clerk’s job or hold us responsible for occasional staff mistakes, then so be it. And if he tells us to do the fire department’s job, then I guess we’ll try to do that, too.”

Because of the open meeting law complaints, Morris has held back on finalizing terms of his employment contract with the city, noting that the vote to hire him could have been voided. However, that could have happened only within 60 days of the vote, and that period expired at the end of November.

The City Council is expected to discuss Morris’ proposed contract at its Feb. 27 meeting.