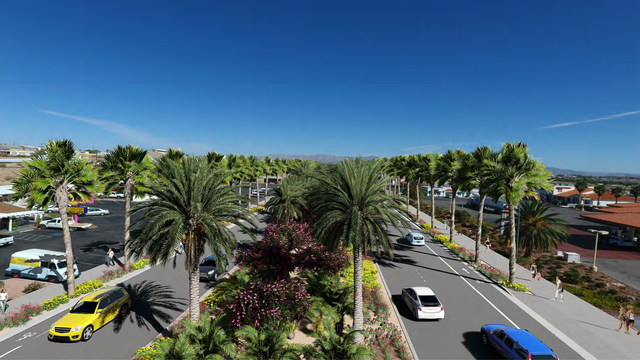 Courtesy This rendering shows what the city envisions Nevada Highway/Boulder City Parkway will look like with renovated roads, expanded sidewalks and new bike paths. The city is expected to begin construction in early 2018. 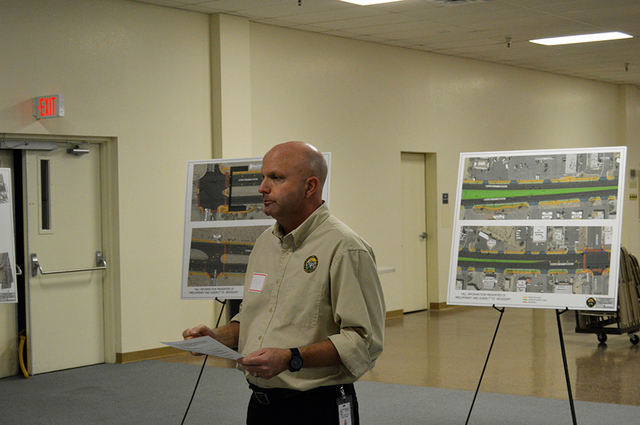 Max Lancaster/Boulder City Review Boulder City Engineer Jim Keane discusses plans to improve the stretch of Nevada Highway that will be renamed Boulder City Parkway during a workshop at the Elaine K. Smith Center on Jan. 11. The workshop sought residents’ opinions on what kind of improvements they would like to see. The city plans to renovate the entire area using city and Regional Transportation Commission funds.

A small group of Boulder City residents gathered at the Elaine K. Smith Center on Jan. 11 to give suggestions about the city’s plans to renovate Nevada Highway.

The projected $10 million Boulder City Parkway complete street project will renovate the streets and sidewalks from Buchanan Boulevard to Gingerwood Street to make it safer and more aesthetically pleasing.

“When we say complete street, we don’t mean just an improvement for motorists,” Boulder City Engineer Jim Keane said. “We are going to make improvements for everyone using the roads and sidewalks.”

The public works department plans to use $8 million in funding from the Regional Transportation Commission of Southern Nevada to widen the sidewalks, add bike lanes and create new medians.

Public Works Director Scott Hansen said the project is expected to begin in 2018, when the Interstate 11 bypass is scheduled for completion.

“We hope to have the RTC funds locked in for 2018, and we expect to start then,” Hansen said. “This project is a way for us to counter the effects of the bypass by making our streets more accessible to residents and tourists.”

The project is to cost $2 million out of the city’s general fund, which would be more expensive than the $1.4 million approved in 2011 to renovate the downtown area. That project included major utility upgrades, landscaping and paving, along with a decorative entry arch over Nevada Way.

“We are expecting the project to cost more than the downtown renovations because the highway is longer than downtown,” Hansen said.

Residents at the workshop seemed most concerned with access to businesses along the highway, with many of them worried that the proposed new medians would make it more difficult.

Don Rodriguez, owner of BC Pool Supply at 1643 Nevada Highway, said an overabundance of medians would make it harder for customers to get to his business.

“I don’t feel like my business is going to benefit at all from these upgrades,” Rodriguez said. “I think medians are just going to cut off access to my store.”

Rodriguez said he was worried that the current layout would not include turn lanes into his business, forcing customers to make U-turns.

Boulder City Chamber of Commerce CEO Jill Rowland-Lagan asked if the money to build medians could be used for other purposes.

“Do we have to have medians?” Rowland-Lagan asked. “It just seems like we could use that money for something else.”

The city is not required to use RTC money for building medians if residents do not want them, according to Hansen.

“We are thrilled that everyone is giving such good ideas, but RTC money does have to be used for road improvements,” he said.

Resident Dale Napier expressed concern about crosswalks on the roadway, which he said were too hard to see even for longtime residents.

“I use these roads as a motorist, cyclist and pedestrian,” Napier said. “I have been using these streets for years, and I even forget about the crosswalks on the highway. That must be fixed because the lack of visibility is a safety hazard.”

Keane said the city has every intention of creating safer streets for everyone.

“We have heard the concerns about the crosswalks, and that is a priority for us,” Keane said. “We are considering using LED lights like they use on the Strip. I was downtown the other day, and I could see those lights from way down the road.”

The public works department is looking to set up one-on-one meetings with business owners on the highway. Those who want to set up an appointment can call 702-293-9200.