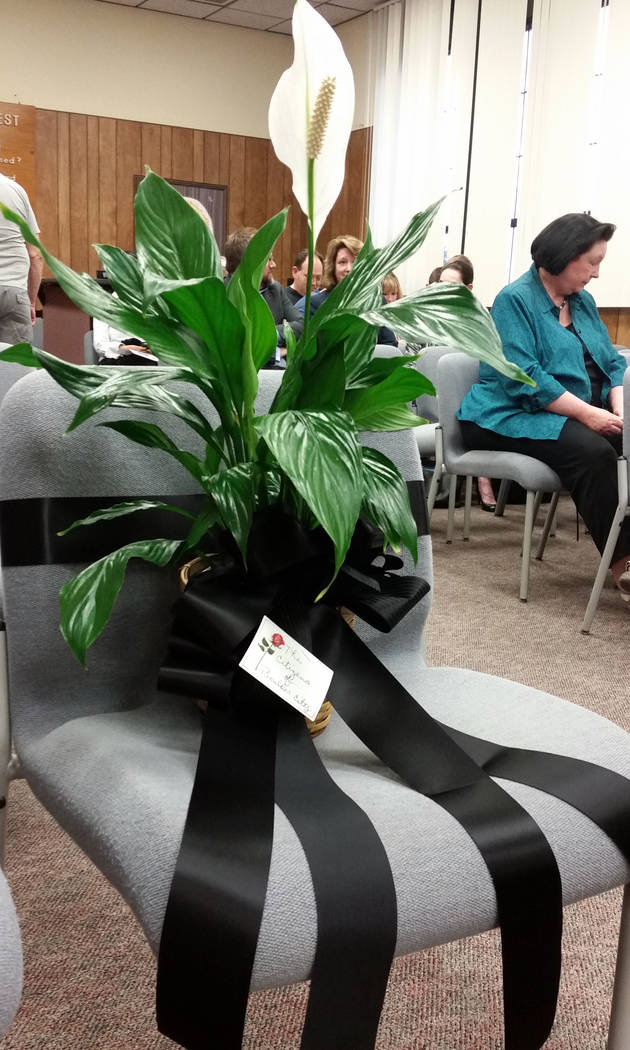 Celia Shortt Goodyear/Boulder City Review Longtime resident Ed Waymire was a constant at City Council meetings. He died Friday and council honored his memory by placing a lily and a black ribbon at his usual seat at City Hall.

The city has decided not seek approval to sell the historic airport hangar, rather it wants to develop a comprehensive plan for dealing with such properties.

At its meeting on Tuesday, April 24, evening, City Council unanimously approved a resolution rescinding the previously approved ballot question about selling 1.72 acres at 1401 Boulder City Parkway, which houses the hangar.

He said that staff felt it was “premature” to move forward with a ballot question about selling a historic property until that program was set.

Councilman Warren Harhay reminded the public that the council did not approve to sell the property. It approved having the voters decide through a ballot question whether to sell it.

“Seldom in life do you get a chance to undo a mistake, and I’ll admit that after hearing the city manager approach me and say, ‘We need to have a comprehensive plan for these historic properties,’ it was obvious that’s really the first step,” he said.

Harhay also suggested the city have some type of open house on the property so that the public can see what is there.

Councilwoman Peggy Leavitt agreed with Harhay and said she has been a proponent of an historic preservation program for a long time, but that the city had not been in a place where it could contribute to one in a meaningful way.

“Several pieces of the puzzle have fallen into place in just the last few months with the addition of financial staff that will enable the city to really crunch numbers and give us valuable information with respect to the worth of the business, the renovation of buildings, the cost of maintenance of buildings, and the kinds of data that we needed that we didn’t have before,” she said.

Leavitt added that Jill Rowland-Lagan’s plan to start a nonprofit for historic preservation and the “very energized citizenry” in town were two other pieces that were in place.

Councilman Kiernan McManus, who was only council member to vote against the ballot question in February, said he was pleased with Noyola seeing the need for a comprehensive plan.

McManus also said that despite Boulder City’s other offerings, its biggest draw continues to be the historic connection to Hoover Dam.

Mayor Rod Woodbury agreed with the council members and said the planning process needs to be in place whether a question is on the ballot or not and that it needs to be for all of Boulder City, not just the airport hangar property.

In addition to council members, residents expressed their desire not to have a ballot question about selling the property.

Dave Nelson said that he had written about ballot questions in the past and if was asked to write this one, he would not know what to do because he did not know the current costs associated with it.

“I don’t know the numbers of what we’d make if (we’re) selling it and what we’d use that money for,” he said.

He suggested to study if the hangar could be made into an event center, which could bring more people into the city.

Tuesday’s meeting also was an emotional time as the council members and the public remembered longtime resident Ed Waymire, who died Friday.

Waymire was a regular at council meetings, sitting in the front row. In memory of him, Harhay said that there was a lily and a black ribbon in his usual seat. They were there to honor him, the man who had “an easy handshake and a warm smile for anybody.”

He said Waymire had better attendance at council meetings than he did.

Resident Alan Goya described Waymire as a mentor, friend and a great citizen. He said that he and Waymire were part of the Really Old Men Eating Out club. He said Waymire didn’t like oranges, but knew that Goya did. So every week at the Romeo’s breakfast, he would give his orange to Goya.

Goya said that even if Waymire did not get an orange, he would ask for one and give it him.

“This Tuesday, I didn’t get an orange and I really miss it,” he said.

“I often tell people that being a public official is very hard,” Leavitt said. “It’s a lot of work. … but the upside is that when you’re serving, you get to meet a lot of wonderful people, and that certainly was the case with Ed and Billie Waymire. … He was just a gracious, kind, considerate man.”

“I really will miss him as well, just looking down at him with the twinkle in his eye every time and smile on his face, and he was a fantastic support of Boulder City,” Mayor Rod Woodbury said.

He then closed the meeting with 15 seconds of silence so everyone present could remember Waymire.

n Approved a resolution awarding 30 residential allotments for Storybook Homes’ Boulder Hills Estates for each of the construction years of 2016-2017 and 2017-2018 as well 30 reservations for the 2018-2019 construction year.