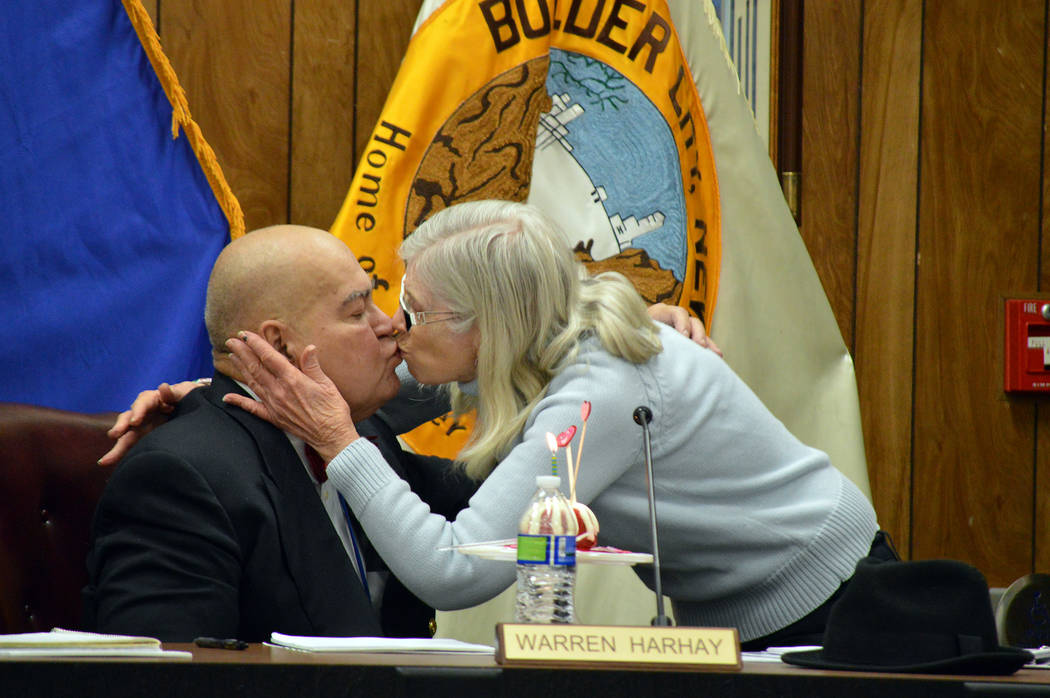 (Celia Shortt Goodyear/Boulder City Review) Marcia Harhay, wife of Councilman Warren Harhay, presents him with a belated birthday cake. City Manager Al Noyola has made a practice of recognizing council members on their birthdays and had mistakenly thought Harhay's was in March. Harhay's birthday is in August.

Boulder City’s new strategic plan will not be forgotten like the previous one, according to staff and City Council.

At its meeting Tuesday, Feb. 12, council members heard a presentation about how staff is going to implement the city’s strategic plan, Focus 2024, which covers the city’s goals for the next five years. The goals are to achieve prudent financial stewardship, invest in infrastructure, manage growth and development, promote historic preservation and sustain a high level of public safety services.

“We completely left our old one on the shelf … we can be much better at it than before,” said Mayor Rod Woodbury. “It needs to be the guiding document moving forward.”

Lisa LaPlante, Boulder City communications manager, said staff will hold an annual review about how those goals are being met. They also will be posted on the city’s website, www.bcnv.org/stratplan, and updated as work is being done.

“We’re making sure we are holding ourselves accountable this time around,” she said.

Council approved Focus 2024 in December after holding four public workshops and two council workshops that the public could attend.

“The day after council approved the plan, department directors met and started developing action steps to make sure each of the goals could be achieved,” LaPlante said. “In a brainstorming session, we looked at steps that were attainable and timely. We put dates to each action step so that we are accountable to completion.”

Focus 2024 Strategic Plan I… by on Scribd

In addition to the annual review, every August the Community Development office will report to council about economic development, including a report on how the city is complying with its controlled growth ordinance.

Council and the public praised staff for its work and the final product.

“I like that this is transparent,” said Councilwoman Peggy Leavitt.

Councilman Rich Shuman complimented staff for nailing down the goals and making them smart and measurable.

Councilman Kiernan McManus said he thought it was an excellent start and that staff had done a “very good job,” but he wanted to look for more ways to draw the community into the process.

“It certainly is a plan people can look at and see if we are being true to it,” he said.

Resident Kevin O’Keefe praised staff for the process and the opportunities the community had to be a part of it.

“It clearly allowed it to be a transparent process. … Everyone who wanted to contribute could contribute,” he said. “I think the strategic plan we have is transparent and shows what the community wants.”

■ Approved the city’s land management plan for 2019, It removed six parcels: 23 acres of land north of Veterans Memorial Drive; 2 acres at 300 Railroad Avenue, the old water filtration plant; 5 acres of land west of Yucca Street and north of Veterans Memorial Drive; 773 acres of land at the Interstate 11 and U.S. Highway 95 interchange; approximately 586 acres at the southeast quadrant of the U.S. Highway 93 and U.S. 95 interchange; and approximately 1,100 acres at the end of Boulder Rifle &Pistol Club access road, which is east of I-11.