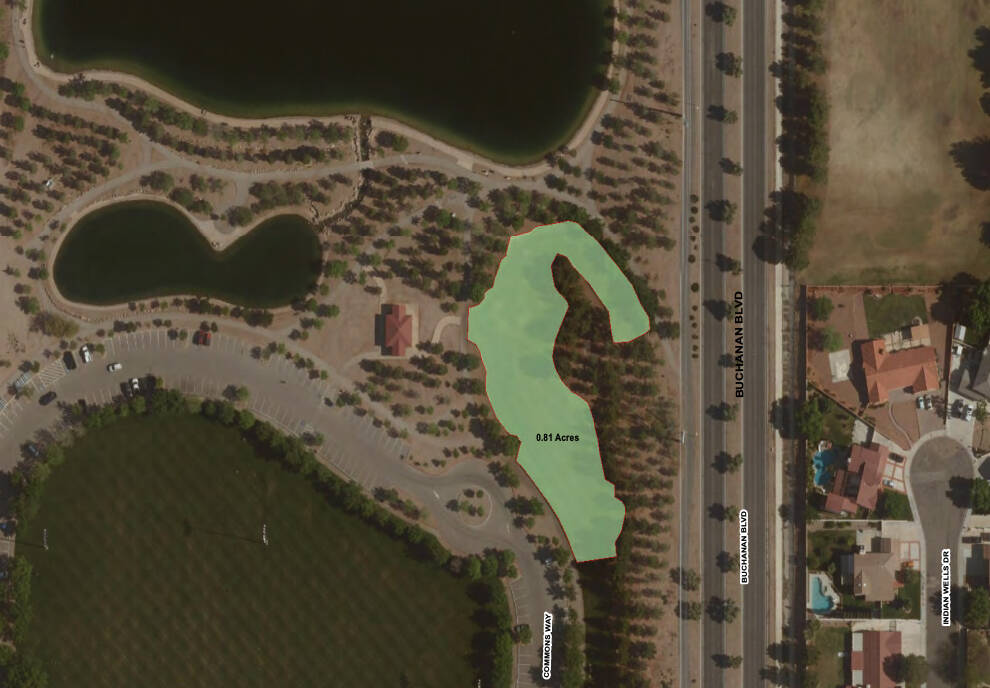 (Image courtesy Boulder City) An .81 acre grassy area inside Veterans’ Memorial Park will become a city-owned and operated dog park after council approved the site during its meeting Tuesday, Oct. 25. It will use $72,000 in federal funds from the American Rescue Plan Act to make the improvements.

Sandra Fraser, president of the 501-C-3 nonprofit organization See Spot Run, spoke to the council about her confusion surrounding the organization’s absence from planning the dog park.

“In all our conversations with the city manager and Roger Hall, I was under the impression that we were going to work together,” Fraser said.

Fraser stated she was unaware of the requirement for real grass when speaking about the proposed park in the past. “I just learned tonight that grass was the only option,” she said. “We are very open, we will work with the city and put in grass.”

Survey respondents most commonly said the reason they don’t use the existing dog park is because of the lack of grass.

Council members James Howard Adams and Sherri Jorgensen discussed the positive aspect of not having to plant new grass at the proposed location. “Everyone here on the council is pretty clear we don’t want to be planting new turf,” Howard said.

“We as a municipality don’t have a dog park yet,” Jorgensen said. “I recognize the recommendation to work with See Spot Run. I feel thankful we were able to give them $50,000 as they have served us as a community when we have not had any other option.”

Councilwoman Claudia Bridges said choosing between the two properties is a “tough decision.”

“I love the idea of this and using a park area that’s already been established, but it makes me uncomfortable that there is this conflict between what the city wants to do and what the director of See Spot Run wants to do.”

“The city is giving them (See Spot Run) $50,000 in addition to the work that’s being proposed at Veterans’ Memorial Park,” he said. “I don’t see how either one is in conflict; I believe they are complementary.”

The $72,000 of funding from the American Rescue Plan Act that has already been approved will be used to section off the park for different dog sizes and create an agility course.

During the meeting, council members also heard the annual update from the finance department and discussed the Boulder City Police seeking outside legal counsel to assist with asset forfeiture.

“It’s a difficult process where you basically have to sue property for forfeiture in criminal activities under the state law,” Shea said.

He explained how the department currently has a years’ long backlog of items because the work overwhelms the city attorney’s office. He also explained how the revenue from the auctions can pay for the legal service.

“We have to be careful to do it right and legally, which is why we are seeking outside counsel,” Shea said.

Council members lauded the finance department for the accolades it received for its annual finance report. The Government Finance Officers Association awarded the department with the Distinguished Budget Presentation, Popular Annual Financial Reporting, the Certificate of Achievement for Excellence in Financial Reporting awards as well as its first Triple Crown Award.

“The transparency I notice and the things that are available for the public is wonderful,” Jorgensen said.

“What has happened in the past three years has been amazing,” Bridges said. “I also want to congratulate you on the hard work you’ve done to receive these awards.”

The Triple Crown was awarded to 317 finance departments out of 21,000 nationwide.