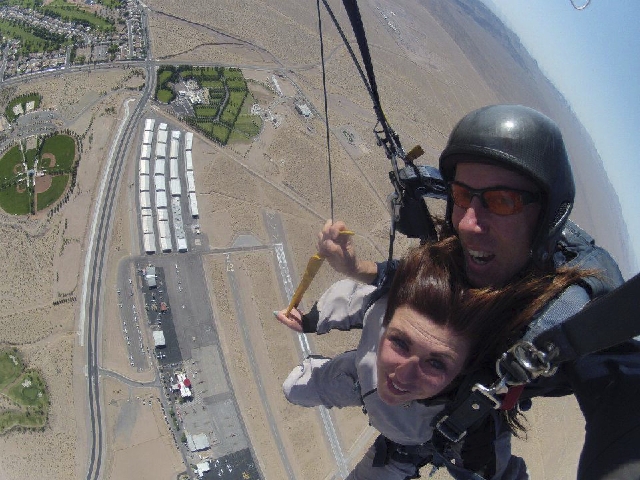 Skydive Las Vegas’ six-year battle with the Boulder City Airport ended in April when the business was deemed a low-risk operation by the Federal Aviation Administration. But another battle lingers for Skydive Las Vegas owner Brent Bruckner.

“All these years that’s the argument I’ve been making,” he said. “It’s quite a relief to actually get some validation on that.”

The most recent FAA inspection was completed in November. A letter was sent to the city stating its findings in April.

But Buckner’s conflict isn’t over. He must now negotiate prices on land that he leases from the city for his drop zone. His most recent lease, negotiated in 2001, was re-signed every two years by the city, charging Buckner for 150-by-150-foot space.

But the city terminated Bruckner’s lease in 2011, saying he’s using more land than he is being charged for. The city opened negotiations on a new lease in early 2011, but Buckner did not respond for several months. When Buckner did respond, he was not agreeable to all the new terms.

With the city threatening to shut him down, Buckner agreed to negotiate.

Buckner’s safety issues began in 2007 when the first round of inspections — a ramp safety inspection — was completed by the FAA and showed increasing risk for a serious accident scenario. City officials said they had to act on the findings because it involved safety issues at the airport.

“The FAA’s findings that an increasing risk for a serious accident scenario was not something the city could simply ignore,” Ahearn said.

The 2007 inspection report warned that diver safety was at risk because of already increased traffic and the possibility that growth would make traffic even more chaotic. With no serious accidents on record at the time, the report’s remedy was to move the drop zone off-property, something the most recent inspection has nixed.

Traffic patterns also contribute to the smooth operation, Bruckner said. Each aircraft flies at a different level over the airport — helicopters fly at 500 feet, small airplanes fly at 1,000 feet and some larger planes fly at 1,500 feet.

City officials are no longer concerned that Buckner’s practices are unsafe but are concerned over a long-term lease agreement for his drop zone.

The two parties will come together soon and airport officials are optimistic that a deal’s within reach.

“The city feels a fair agreement has been reached and expects Skydive Las Vegas to sign the access agreement shortly,” Ahearn said.

However, the new agreement between the city and Skydive Las Vegas was pulled from Tuesday’s City Council agenda.