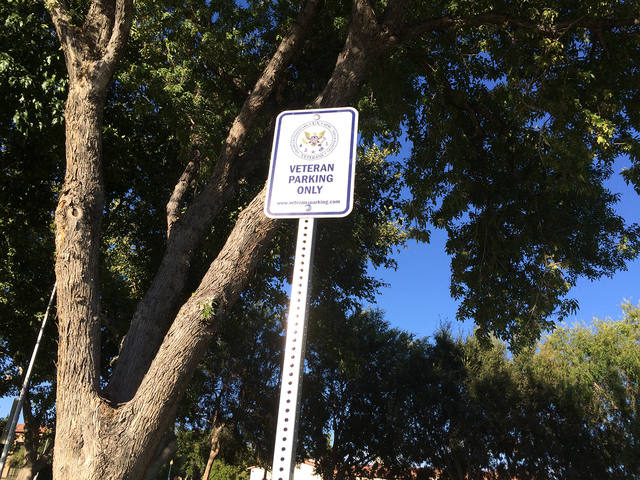 Hali Bernstein Saylor/Boulder City Review As another way to honor those who served our country, Boulder City has partnered with Go Veterans to designate special parking places for veterans.

Boulder City’s respect for its veterans is well demonstrated.

Now the city has designated special parking spots for veterans.

“For Boulder City, it was a no-brainer,” said City Manager David Fraser about being approached by Go Veterans, a Las Vegas-based organization that works with businesses across the country to show appreciation to veterans for their service.

“Look around Boulder City and you will see that we honor our veterans any way we can. For example, we house the Southern Nevada Veterans Memorial Cemetery and Nevada State Veterans Home and we honor our veterans with their names lining Veterans Memorial Boulevard. Boulder City native Matthew Commons was one of the first Nevadans to die in Afghanistan in 2002 in the War on Terror and local Shane Patton was killed in Afghanistan in 2005 and featured in the Hollywood movie ‘Lone Survivor.’ ”

There are four signs marking parking spots for veterans — two at Veterans’ Memorial Park and two near the town’s business district.

“As far as we know, Boulder City is the first city to designate special parking for veterans,” said Bobby Wallace, founder of Go Veterans. “We are proud to partner with Boulder City on this trailblazing initiative.”