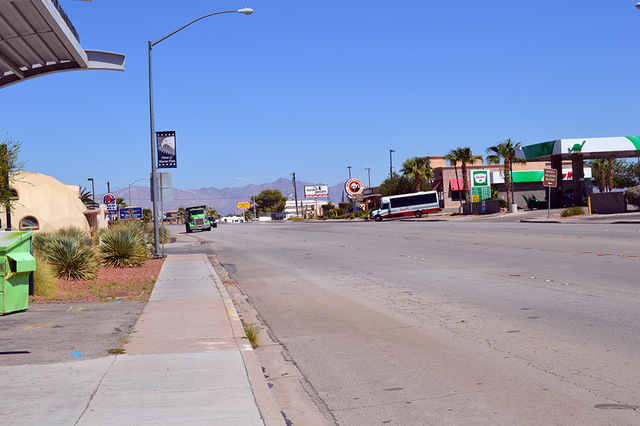 Max Lancaster/Boulder City Review Boulder City officials hope to begin renovations on Nevada Highway by 2018. The project will make the area more cyclist and pedestrian friendly, while also changing the name of the highway to Boulder City Parkway.

The city’s decision to fund design plans for Boulder City Parkway brings the project one step closer to reality, but not all businesses on the site’s location believe it will be completed.

City Council approved an agreement with the Regional Transportation Commission last month, with plans of making what is currently Nevada Highway more bicycle and pedestrian friendly. The project also involves changing the name of the highway to Boulder City Parkway, which officially will be recognized as U.S. Highway Business 93 by the state.

According to Boulder City Public Works Director Scott Hansen the project is still currently in the beginning of the design stage, but the city is hashing out ideas.

“What we really want to do is make this area more accessible to the community,” Hansen said. “We want to expand the sidewalks, create new bike paths and do some more landscaping to make the area more appealing.”

The city has hired CA Group, a consulting firm specializing in transportation planning, engineering and construction management, to create the parkway design plans and produce a cost estimate.

The city has budgeted over $8,000 to complete the design phase of the project.

The project is in response to the creation of the Interstate 11 bypass that will be completed in 2017. It is another way the city hopes to counter any adverse economic effects of the bypass, along with other projects including the potential creation of a new visitors center for the Nevada State Railroad Museum, and renovations to the city’s hiking trails such as the River Mountain Loop Trail.

At a council meeting in August, Mayor Rod Woodbury admitted to the bad feelings many business owners not located downtown have toward City Council.

However, business owners in the area expressed a range of emotions from faithless cynicism to cautious optimism toward the project.

“I understand what they are trying to do and it is great, but it will never happen,” Rosenberg said. “They have never really favored this area before so I don’t understand why they would now, and even if they did want to fix the area up, they wouldn’t be very Johnny on the spot about it.”

Councilman Cam Walker said when City Council approved downtown renovations it was not doing so in spite of the businesses on the highway.

“When we approved the work done downtown it was really a matter of timing. We were having some infrastructure problems with a sewer line and it made sense to improve the entire area. It was the right thing to do at the time.”

Now that downtown renovations are complete, Walker said it is time to fix the Nevada Highway area.

“We never forgot about the businesses in that area and now is the time to invest and improve the highway.”

Some business owners said they felt the city would do everything in its power to see the highway renovations are complete, but would not be quick about doing it.

“All the naysayers who think renovations will never happen here were the same people saying the bypass was never going to happen.” Begay said. “If the city cares about the businesses here like they say they do, then the project will get done and if, for some reason they don’t, then people will pack up and leave.”

Despite the varying opinions on the possibility of the parkway project, many of the shop owners were eager to share their ideas on how the city can bring more customers to the area.

Don Sanders, owner of Loop Custom Cyclery, is skeptical of the parkway project, but said the city can make the Nevada Highway area more successful by embracing the cycling community. It’s an idea that Woodbury embraced in his column in the Boulder City Review on Sept. 1.

“We need to really invest in bike trails around this area,” Sanders said. “Cyclists are a group of people with disposable income who can bring millions into a local economy. If we made the city bike friendly enough to do events like charity rides, it would help out the community a whole lot.”

Justin Aliperti who is a supervisor at ziplining company Flightlinez Bootleg Canyon, said something as simple as billboards could bring in a whole new set of clientele.

“I think a place near the interstate to put up a billboard would help out a lot of businesses,” Aliperti said. “There is no denying it, the interstate is going to hurt; but if Boulder City businesses could find new ways to advertise to people driving by, the interstate won’t be as much of a problem.”

Dee Begay, who works at Native American Jewelry, also said billboards would do a lot of good for businesses on the highway.

“I am a sucker for billboards,” she said. “If I see a cool billboard advertising a town I don’t know, then I go to that town.”

Others felt that some renovations would bring out the town’s natural charm, thus bringing more visitors.

“Some towns just have this wonderful feeling about them,” Erick Begay said. “You know that feeling or vibe that makes you want to stay for a bit. I think Boulder City has that feeling and if the city fixes this area up and makes this area feel less like a highway, then people will want to stay.”

“The plan is to take area and make it look more like an extension of downtown and less like a rural highway,” Hansen said. “We want to make the parkway a place people want to walk to.”

Walker said he expects the design phase of the project to be complete by 2017 with renovations beginning in 2018 but no official date of completion has been set.