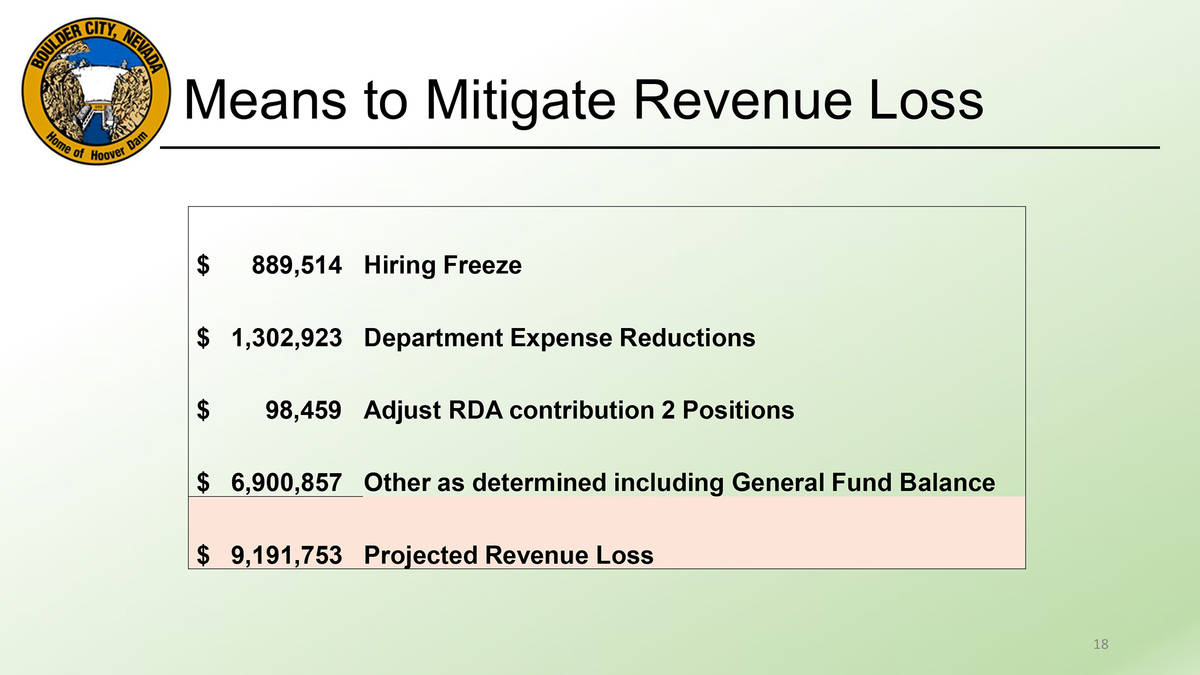 Boulder City City staff is looking at ways to mitigate the projected $9.1 million in lost revenue for the 2021 fiscal year budget.

City staff is planning for the worst but hoping for the best with projected revenue losses for the 2021 fiscal year budget.

According to Finance Director Diane Pelletier, the city is facing an estimated 40 percent drop in all its revenues except for its solar leases. Pelletier said that estimate is the worst-case scenario.

“We would rather plan for the worst and hope for the best,” she said at an April 22 special City Council meeting. “So this is a very conservative budget.”

The 40 percent loss represents an estimated $9.1 million and is caused by closures throughout the state and the nation due to the COVID-19 pandemic.

A little more than one third of the city’s revenues come from consolidated tax, which is a combination of sales, liquor, cigarette, real estate property transfer and government services taxes. It is the largest source of revenue for the city.

“These revenue losses are real,” said Mayor Kiernan McManus. “We haven’t seen the impact yet.”

Budget Manager Angela Manninen said to offset the loss staff is recommending reducing department expenses by $1.3 million, implementing a hiring freeze that will save $889,514, using $98,459 from the Redevelopment Agency to help fund two staff positions and pull $6.9 million from other city funds including the general fund.

The $6.9 million could include $2 million from a new revenue stabilization fund if the council approves its creation at Tuesday’s, April 28, meeting.

A previous draft of the budget separated $4 million from reserves and $2 million from the proposed special revenue fund to help offset the loss.

“We’re looking at an ending fund balance in the current fiscal year of $20 million and for the next fiscal year we’re projecting to use $6.3 million of that to compensate for lost revenue in essence?” McManus asked.

Manninen said that was correct.

Without using the proposed revenue stabilization fund, the general fund’s ending balance is expected to be approximately $2.5 million at the end of fiscal year 2021. With the fund, it is estimated to be at approximately $5.6 million.

Councilwoman Claudia Bridges said she understood that staff is working to create a reasonable budget while cutting all that they could.

“I don’t know what the answer to that is,” she said of the situation.

Manninen said the utility funds will not be hit as hard as the city’s other funds, but they will see a loss in interest revenue, penalties and infrastructure sales tax.

Councilman James Howard Adams asked if that money isn’t able to come in, how would it affect the funds.

Manninen said cash flow would be reduced if that happened, but there were so many “what ifs” it was hard to determine how the situation could actually play out.

The airport fund is also expected to lose $400,000 in lease revenue.

“I can’t imagine what the finance department has been going through,” said McManus. “At this time, with this situation, the work that you all are doing is invaluable, not just to this City Council, but the city. I really appreciate all the work you’re doing. I’m sure it’s very difficult, so thank you for what you’re doing.”

McManus did encourage staff and the council members to take a “hard look” at capital projects in the Parks and Recreation Department and see which ones could be delayed and which others could be removed.

“I guess I’m trying to deliver a message to all the council members that now is not the time to start looking at how much more we can spend,” he said. “It’s how we can spend less. … If we’re going to need to tighten our belts, this City Council needs to be among the very first that looks at ways to do that.”

No action by council was required at this time for the budget, which will come back before them at the May 26 meeting for final approval so it can be submitted to the state by the end of the month.

Council did unanimously approve its 2020 financial plan that laid out the projected revenue loss from COVID-19.