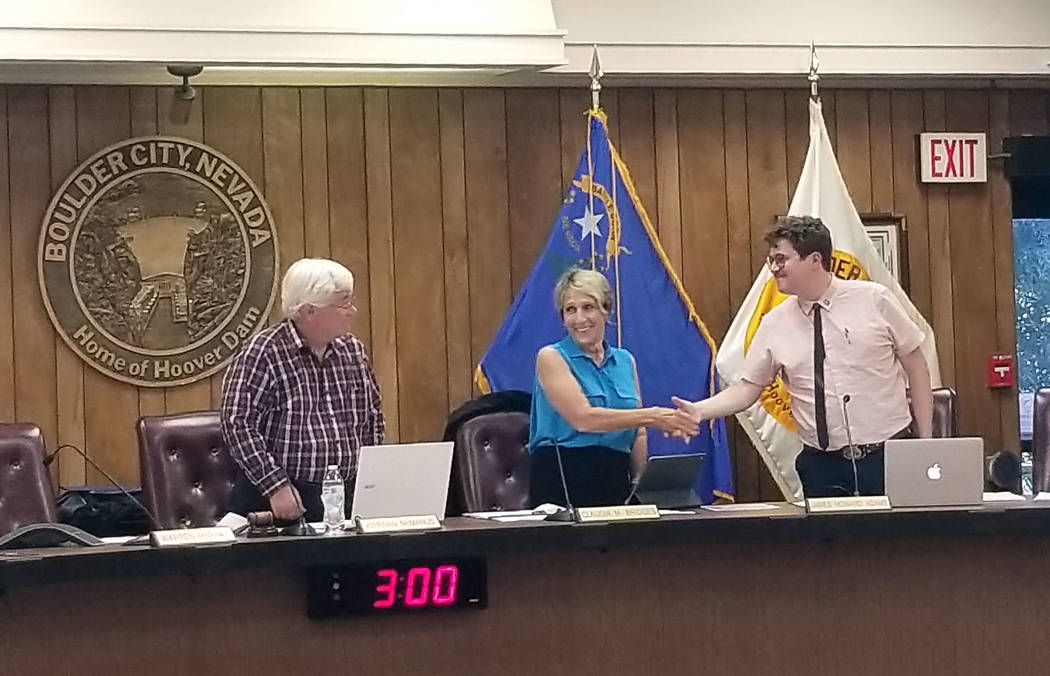 Participation by public officials on social media could be problematic with Nevada’s open meeting law, according to a recent training session for Boulder City staff and officials.

Nevada POOL/PACT Executive Director Wayne Carlson conducted the seminar at City Hall on July 10, which included a presentation on the law and information about quorums outside of public meetings. Among those attending were new City Council members as well as appointed commission and committee members.

A quorum is the minimum number of members of an assembly or society that must be present at any of its meetings to make the meetings’ proceedings valid. In Boulder City, the quorum for its five-member City Council is three members.

“It’s dangerous territory because it’s outside the public eye, and … if it’s a quorum having lunch together then it’s very possible that people are going to perceive you are discussing council business,” he said about meeting outside of public meetings. “And that perception alone might get you a complaint or investigation.”

Carlson also said exchanging information on social media can be a problem for council members because a quorum could be present there for a deliberation. That would not be a properly noticed meeting even if they are not participating in the “discussion.”

According to the law, to deliberate means to collectively examine, weigh and reflect on the reasons for or against the action, and action means decision, promise or commitment.

“Now the public has a right to know what you’re talking about and there is no such thing as privacy that (you) could have asserted before as a private citizen,” Carlson said. “Now it’s the public’s business you’re deliberating and that’s why it’s a prohibition of the open meeting law because that creates that environment outside the public discussions. The public is not aware you’re deliberating toward a decision.”

After the election, some concerns were raised about the mayor and council members being part of the same closed Facebook group and whether it was a violation of the open meeting law.

City Manager Al Noyola asked Carlson if that is a problem.

Carlson is considered an expert in special risk management needs of public entities and has been providing training to the city for several years, according to Lisa LaPlante, communications manager.

“The city relies on POOL/PACT for best practices and for keeping the city’s elected officials, appointed council/committee members and staff updated on Nevada’s legal and ethical issues. It is important to provide training on a regular basis. … which has been helpful as Nevada Revised Statutes can change every two years,” she said.

Councilman James Howard Adams said the session was excellent and it was helpful to have general concepts explained in greater detail, especially the need to say vigilant with following the open meeting law.

“The biggest take away for me was an overview of best practices in good governance,” he said. “This was less about the actual laws and more about how we can best represent our community. How to identify and remedy tensions that may occur, and how to build a strong unifying body that allows for progress to be made, even when differences of opinion among members is present.”

“I think what I learned that was most important was the total concept of the open meeting law and what my responsibilities are in following those rules,” said Councilwoman Claudia Bridges. “The whole purpose is the need for transparency. Also, the importance of the way a meeting is run and making sure that motions are clearly understood.”

Mayor Kiernan McManus said the most important thing he received from the session was that laws and guidelines are established to prohibit financial conflicts of interest and influence.

“At the same time the laws allow for elected and appointed officials to discuss issues with residents prior to the elected or appointed bodies holding public meetings to reach joint decisions,” he added.

The Nevada Public Agency Insurance Pool (POOL) was formed in 1987 when some of Nevada’s public entities “pooled” their resources to receive better casualty insurance coverage at a reasonable cost. Nine years later, the Public Agency Compensation Trust (PACT) was organized to provide workers’ compensation coverage to the membership.