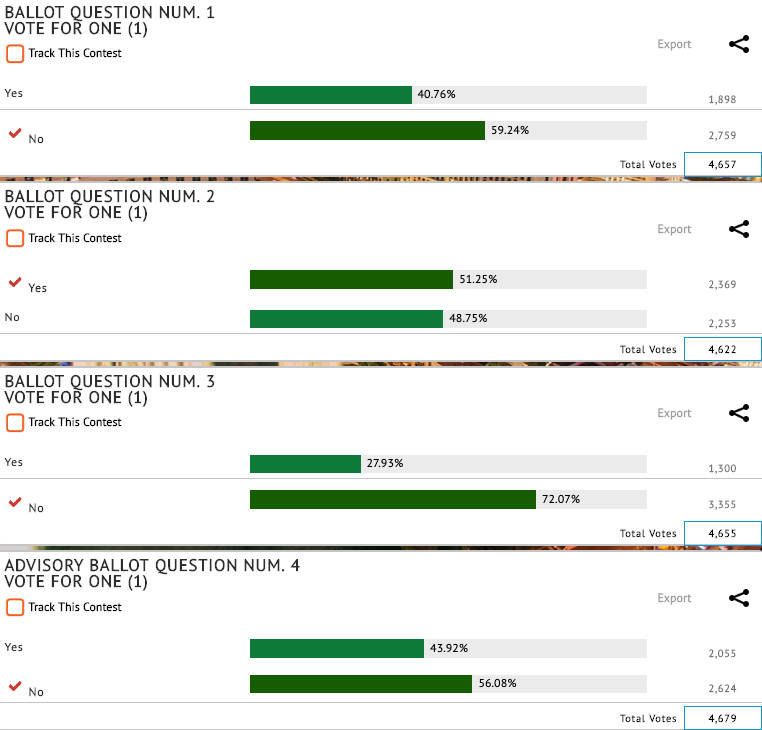 In Tuesday’s election, Boulder City residents showed they wanted City Council to be able to save money by refinancing debt but decided not to move forward with funding a proposed new aquatic center or allowing off-highway vehicles on city streets.

Boulder City voters were asked their opinions on four ballot questions. Only Question 2, which allows the city to refinance existing debt, passed. It received 2,369 yes votes and 2,253 no votes. According to city code, Boulder City could not incur any new debt of $1 million or more without voter approval and the city’s bond counsel considers refinancing existing debt as new debt.

“We believe this is a great win for the people of Boulder City,” said Al Noyola, city manager. “Council will now be able to make the decision to refinance outstanding debt without having to wait months for voter approval, possibly losing out on anticipated savings.”

Boulder City ballot Question 1 asked whether the city could use money from its capital improvement fund toward the design and construction of a new aquatics facility in order to reduce the bond obligation. The funds would be used as they become available and would not exceed $5 million. It received 1,898 yes votes and 2,759 no votes.

Ballot Question 3 asked whether the city could authorize issuing up to $40 million of general obligation bonds for the purpose of acquiring, constructing, improving and equipping recreational projects as defined by state law including an aquatic center. It failed with 1,300 yes votes and 3,355 no votes.

If it had passed, it would have required a property tax levy for 30 years.

“We know the 40-year old community pool will continue to need repairs,” Noyola said. “Unfortunately, the soonest the city can consider other options will be November 2020 — our next general election. With rising construction costs and increasing tariffs on materials, even a scaled-back facility may be cost-prohibitive.”

Boulder City ballot Question 4 was an advisory question asking whether voters supported allowing off-highway vehicles on city streets according to state law. It failed with 2,055 yes votes and 2,624 no votes.